Greek referendum hint is another step closer to the exit 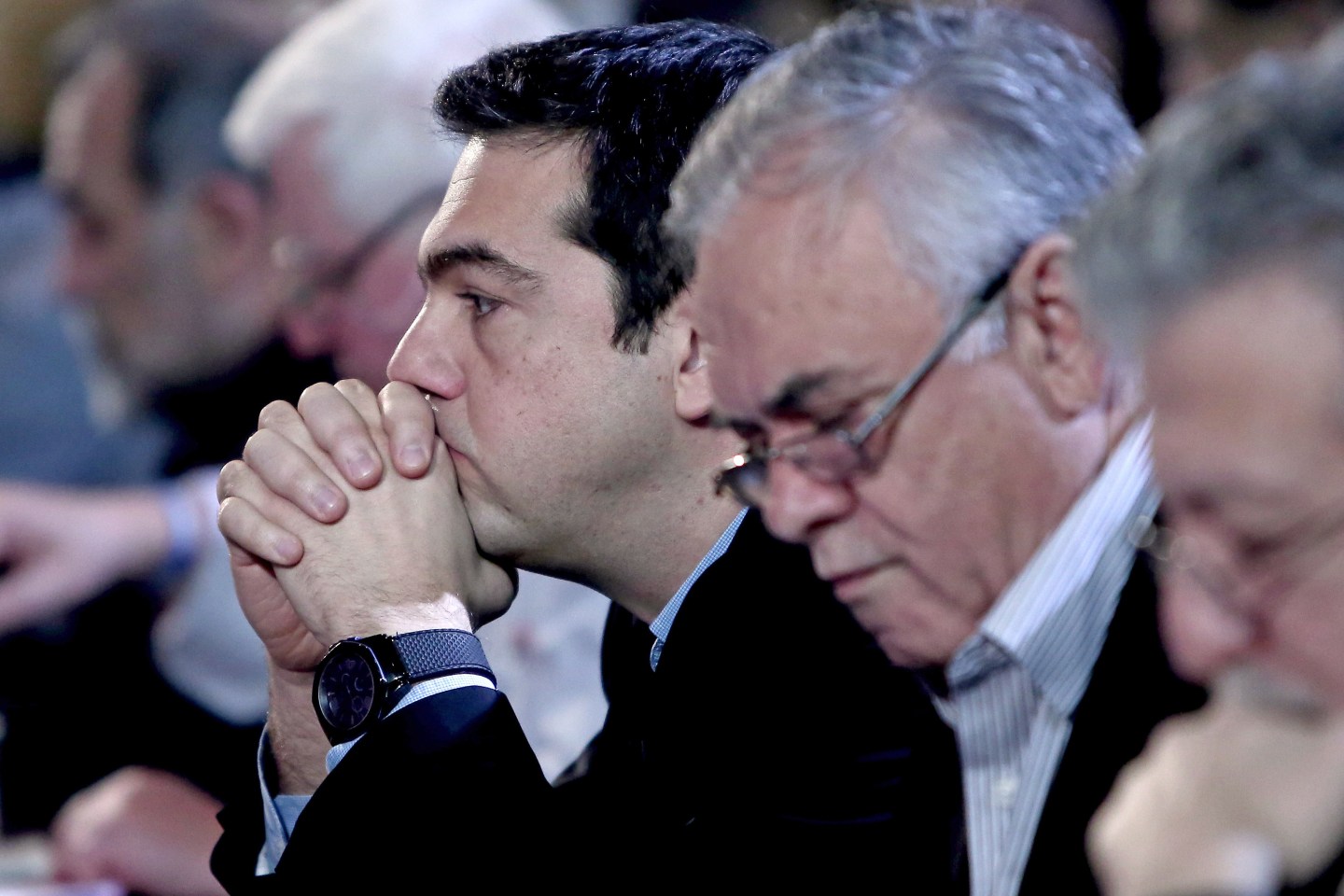 Greek Prime Minister Alexis Tsipras (L) sists next to Deputy Prime Minister Giannis Dragasakis (R) before delivering a speech at the Syriza party headquarters, in Athens on February 28, 2015. Greece's Prime minister vowed Saturday no retreat from his principles in the eurozone country's "battle" with creditors as he seeks to live up to election promises to reverse austerity cuts and avoid a third bailout. "The battle will continue," the far-left Alexis Tsipras told the central committee of his hard-left Syriza party in Athens. "Anybody thinking that we are going to go away will be disappointed." AFP PHOTO / Angelos Tzortzinis (Photo credit should read ANGELOS TZORTZINIS/AFP/Getty Images)
Photograph by Angelos Tzortzinis — AFP/Getty Images

Greece’s left-wing government raised the stakes again at the weekend, hinting at new elections or even a direct referendum on leaving the euro if it doesn’t get the breaks it wants on implementing its bailout agreement.

Finance Minister Yanis Varoufakis told the Italian newspaper Corriere della Sera: “As the prime minister told me, we are not glued to our seats. We can turn to elections. Call a referendum (on the euro).”

The good news is that that’s the first sign of Athens articulating a Plan B so far. The bad news is that it’s not the sort of plan anybody really wants to see.

We’ve been here before, of course. In October 2011, as the evidence mounted up of the bailout program doing more harm than good, George Papandreou had called a referendum on whether or not to stick with it.

Papandreou’s center-left PASOK government was suffering so many defections that it was on the verge of losing its majority in parliament. His aim, like that of today’s Prime Minister, the radical leftist Alexis Tsipras, was to extract concessions from the creditors using the threat of instability that a Greek exit from the euro would cause.

Instead, all Papandreou managed to achieve was the end of his own political career. The thought of the people actually taking their destiny into their own hands was too alarming both for his own party and international governments.

Tsipras essentially faces the same dilemma as Papandreou: he hasn’t been, and won’t be, able to find a way of keeping the euro without further economic and social pain, a combination that the Greek electorate–despite years of evidence to the contrary–still seems to believe in.

A referendum in April would have the same charm for Tsipras as it did for Papandreou: it will absolve him of responsibility for whatever follows, whether that’s more years of waiting for the economic turnaround, or the chaos of having to introduce a new currency.

Importantly, though, it might not have the same personal risks for Tsipras’ career. He hasn’t promised to keep the euro at any price, and his willingness to confront the rest of the Eurozone on the bailout issue has played extremely well locally. Even if the government’s approval rating is down from its honeymoon peak of over 83%, it’s still around 64% according to the latest polls.

And there are two other important differences with 2012. Then, the Eurozone’s politicians still had patience with Greece, believing that it wanted to reform. They were also painfully aware of not having a safety net to stop contagion spreading to countries like Spain and Italy. Today, the European Central Bank is providing safety nets, fire exinguishers and lifebelts in one form or another. Meanwhile, the Eurozone’s political exasperation is increasingly plain to see and hear.

“We have lost over two weeks in which very little progress has been made–we have to stop wasting time and start talks seriously,” Dutch finance minister Jeroen Dijsselbloem told reporters before Monday’s regular huddle of Eurozone finance ministers, known as the Eurogroup.

The ministers, as expected, gave short shrift to the six concrete proposals by Greece’s finance minister Yanis Varoufakis for replacing some of the bailout program’s harsher points with less socially painful measures.

Before the meeting, Bloomberg had quoted one official familiar with the proposals–which included hiring thousands of non-professionals to form a flying squad of undercover tax inspectors–as “amateurish”.

That might be a bit harsh. The proposals do appear to go in the right direction, and the idea that tax inspectors would be better off lifting their heads out of company books that bear no relation to reality is certainly worthwhile. But the proposals again lacked any real concrete numbers (except for a levy on electronic gambling that was supposed to bring in €500 million a year).

But it’s difficult to avoid the impression that Syriza is only taking the process of softening the bailout plan half-seriously, playing for time while it works out which way it will jump when the chips are down in April.

(Antonios Trifyllos contributed to this report)