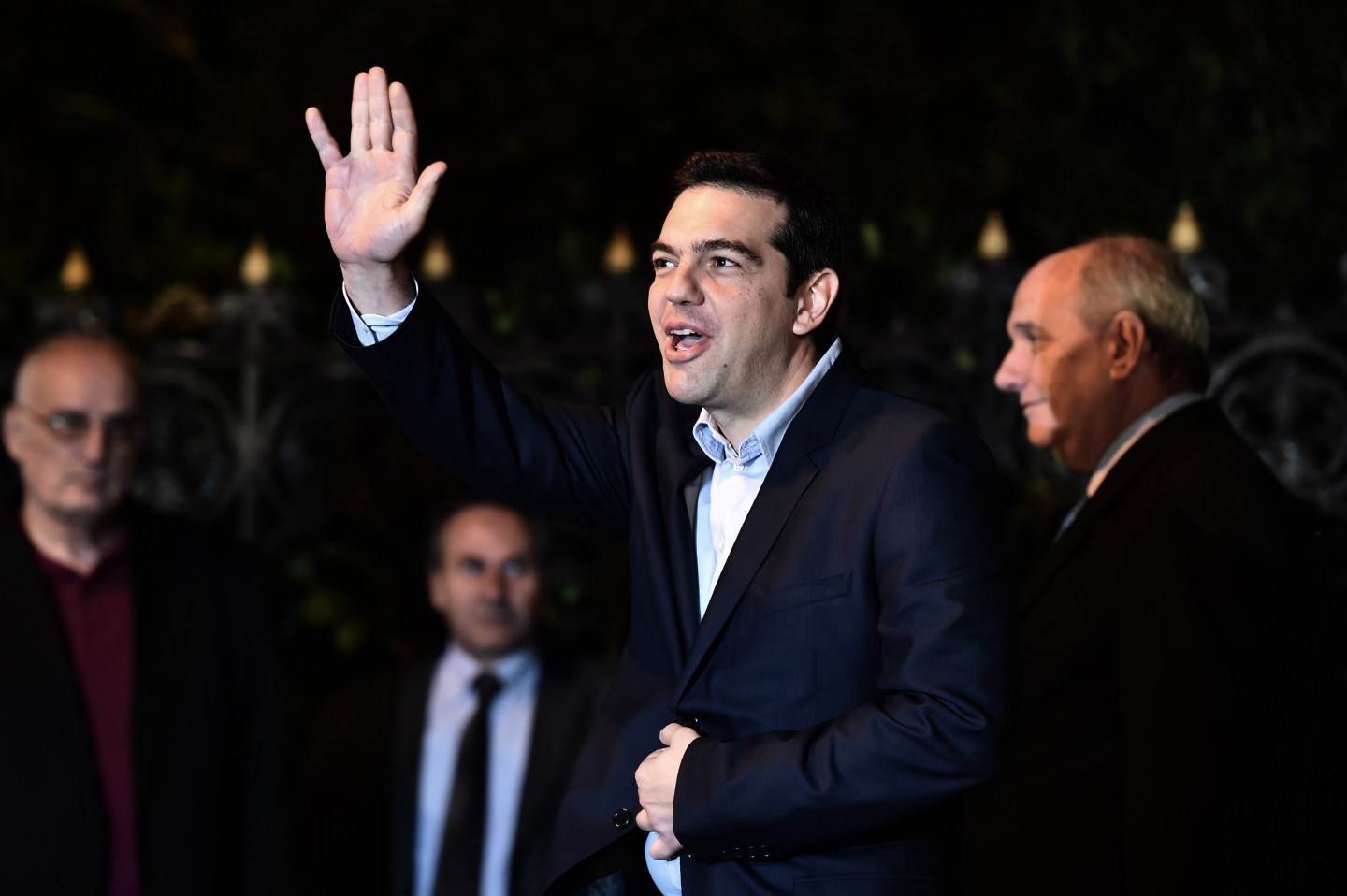 Newly appointed Greek Prime Minister Alexis Tsipras waves as he leaves the Presidential Palace in Athens, on January 27, 2015. Greece named radical left-wing economist Yanis Varoufakis as its new finance minister, giving him the mammoth task of leading negotiations with international creditors over the country's bailout. The appointment of Varoufakis is seen as a signal that the new anti-austerity Syriza-led government will take a hard line in haggling over the 240-billion-euro ($269 billion) EU-IMF package. AFP PHOTO / ARIS MESSINIS (Photo credit should read ARIS MESSINIS/AFP/Getty Images)
Photograph by Aris Messinis — AFP/Getty Images

The seeds of Greece’s current debt crisis were sown years ago. It was the poorest and least stable economy to join the Euro in 2000. Greek and European leaders hoped that joining the currency would force the country to adopt growth policies that would keep it from needing to devalue its currency just to stay competitive.

But the Greek government never adopted such policies. Instead, they cooked the books to gain admission into the Euro and to hide their high debt levels from other member nations.

Once the financial crisis hit, there was no way to sweep the harsh economic realities under the rug. Yields on Greek debt soared and, since 2009, Greece has relied on on the largesse of the rest of the Eurozone, most notably financially conscientious Germany, to remain solvent.

In return for its help, Germany has demanded that Greece slash its public budgets, sell off public assets, and reform its labor laws. These changes, some argue, will spur faster growth and allow Greece to become an upstanding citizen of the Eurozone.

Greece’s bailouts have allowed it to keep its creditors at bay, but they have been a short-term disaster for the nation’s economy. Facing depression conditions at home, the Greek electorate turned to a left-wing government in the parliamentary elections in January, which ran on promises to fight against the austerity conditions imposed upon it as conditions for its bailout.

Since then, Eurozone officials, and Germany in particular, have taken a hard line against Greece, refusing to loosen its bailout terms, out of fear that giving into Greece will embolden the left wings of other bailed out nations like Spain and Portugal.

But this logic misses the forest for the trees and might end up costing Germany and the Eurozone a lot more, in terms of hard cash and geopolitical power, according to Daniel Speckhard, former U.S. Ambassador to Greece.

Speckhard, who is now president and CEO of Lutheran World Relief, argued in a recent interview with Fortune that because the debt negotiations are “silo-ed off” from discussions about European and Western unity in the face of global threats like ISIS and an increasingly bellicose Russia, Germany and the West risk letting Greece slip from their sphere of influence. Greece is a critical state for exerting American and Western influence in both the Middle East and Eastern Europe.

“Greece is much more important than people think,” says Speckhard. “The conventional wisdom is now that we can allow a Grexit and just cauterize the wound, but it’s not that simple.”

Speckhard points to the fact that Greece’s current left-wing ruling party, Syrzia, already has a close relationship with Russia. A day after he was elected to the post, Prime Minister Alexis Tsipras objected to any further sanctions against Russia surrounding its support of separatists in Ukraine. And in May, Tsipras traveled to Russia, where he criticized the pro-European government which took power in Ukraine last year.

Other top government officials, like foreign minister Nikos Kotzias, have worked to water down the threat of further sanctions against Russia as well. The Greek and Russian people also have cultural ties, including a shared religion, which make cooperation more plausible.

From an economic perspective, the exit of Greece from the euro currency zone might not seem like such a loss. Greece’s GDP is roughly the size of Louisiana’s—even if the country were to suffer a financial crisis as the result of its exit, it’s unlikely that the trouble would spread to the global economy.

But if you think that fighting Russian aggression in Eastern Europe is important to maintain political and economic stability in the region, then taking a softer line on Greek debt may be worthwhile in the long run.

The International Monetary Fund estimates that aid from the West (including the U.S., the IMF, and the E.U.) to Ukraine could reach upwards of $40 billion, and there is no guarantee that this money will lead to an end of the Ukraine crisis; it is merely helping the Ukrainian government stay afloat.

Speckhard argues that Europe could, for far less money, loosen some of the terms of Greece’s bailout and give the Greek people time to realize that Syrzia can’t deliver on its populist promises and remain a member of the Euro currency.

The bean counters in Berlin and Brussels are worried such a solution would encourage Spain—which has its own left wing party gaining support—to renege on its bailout conditions. But Speckhard argues that taking a hard line on Greece won’t prevent this from happening anyway.

Economically speaking, Greece might not be globally significant. But at a time when the U.S. and Europe is fighting costly political battles in Eastern Europe and the Middle East, poking a country like Greece—which sits at the crossroads of these regions—could be far more expensive in the long run.