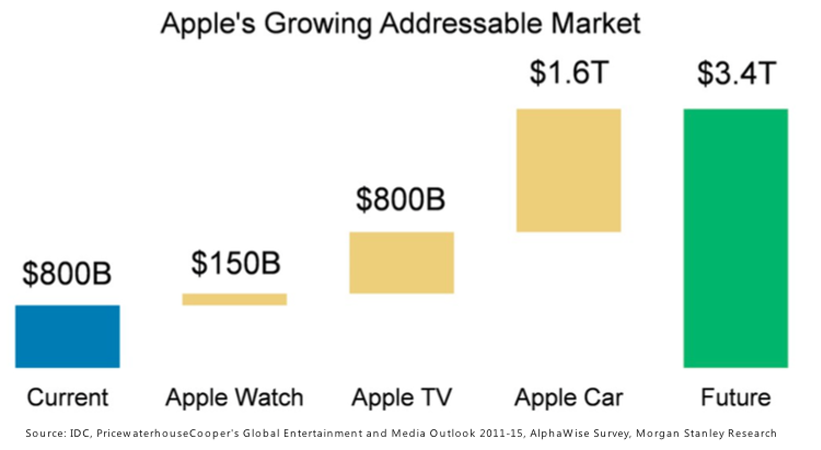 In a major report issued Monday that finds potential for growth in nearly every aspect of Apple’s operations, Morgan Stanley’s Katy Huberty estimates that the company’s total addressable market — the business Apple might capture if it had no competitors — could grow from $800 billion today to $3.4 trillion (repeat, trillion) by 2020.

Tech companies, in Huberty’s view, are like sharks. In order to thrive they must constantly expand and improve their platforms and ecosystems.

These companies want their products and content to be ubiquitous and available everywhere, and/or they want their tools and devices to proliferate and become the preferred way to access content. It is both offensive — to gain more of the users’ attention — and defensive — to make sure their competitors are locked out or do not lock them out of a medium to reach users. As products and content becomes accessible anywhere, the only constraint left is time.”

Huberty estimates that Apple currently touches one-third of its users’ time and three-quarters of their free time.

Using U.S. Department of Labor statistics about how Americans spend their time, she examines three new product categories with which Apple could dramatically expand the reach of its ecosystem — an ecosystem whose profit margins and stickiness are already the envy of the tech world:

.
Huberty has raised her 12-month price target for Apple to $160 from $133. That makes Huberty’s one of Wall Street’s most-bulling Apple analysts, tied with Cantor Fitzgerald’s Brian White. In Huberty’s bull case — where everything breaks Apple’s way — the stock goes to $190. That’s $1,330 in pre-split shares.