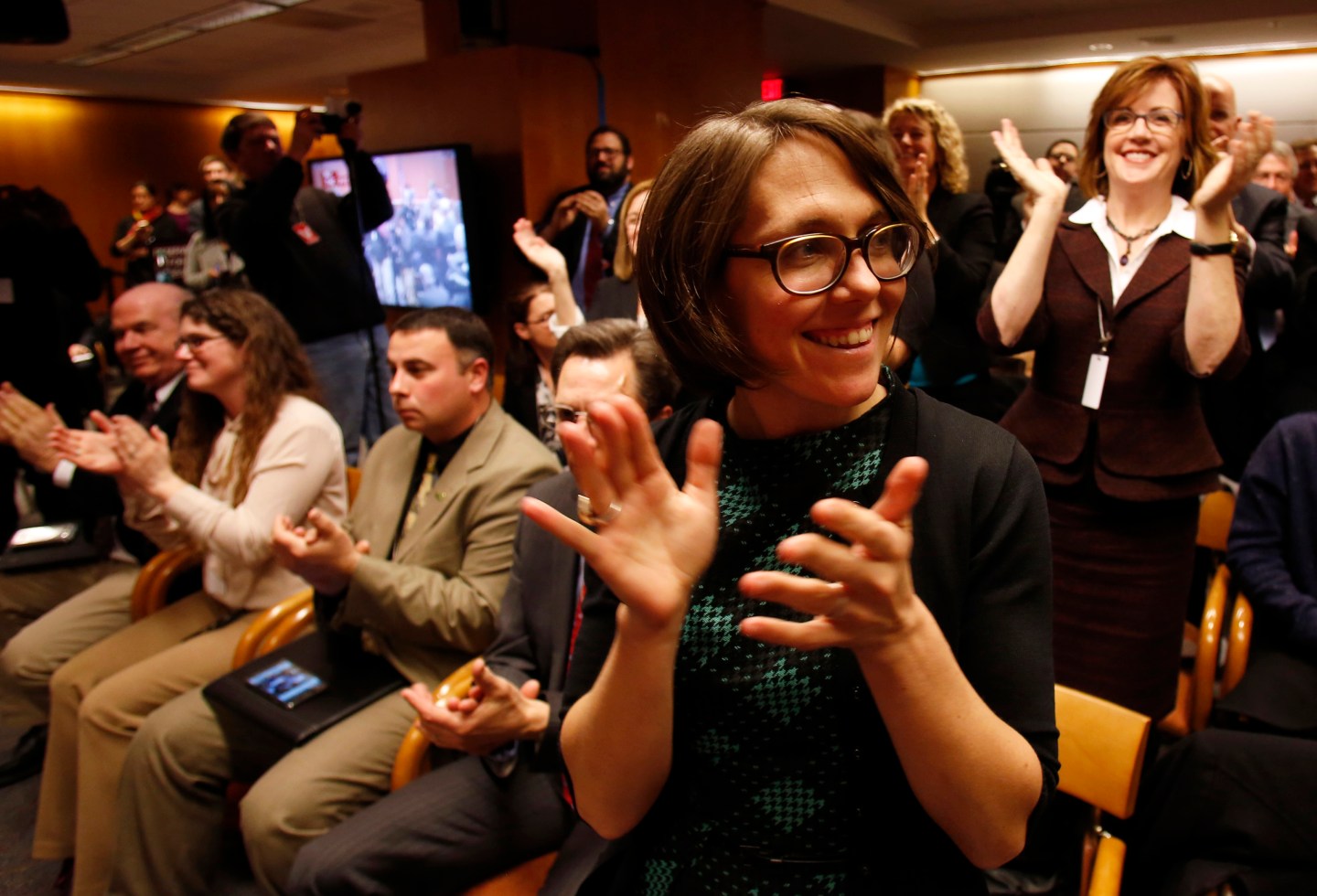 The Federal Communication Commission voted Thursday to enact new net neutrality rules that give the commission oversight of the Internet in an effort to ensure a level playing field on the web.

But if anyone needed proof that the debate over net neutrality and government regulation of Internet Service Providers (ISPs) is far from over, they needed only to look at the wide range of responses to the FCC’s Thursday vote. Companies, industry groups, politicians and even the White House weighed in with their (differing) views on the new FCC rules and where things should go from here.

Not surprisingly, big telecommunications companies and cable providers are not happy about the new FCC rules. Even before the vote took place, AT&T (T) warned of a possible federal lawsuit challenging the new rules. Jim Cicconi, AT&T’s head of public policy, wrote a blog post following Thursday’s vote in which he hinted that the FCC has a fight on its hand. He noted that the commission’s 3-2 decision — with three Democrats defeating two Republicans — “is an invitation to revisiting the decision, over and over and over.”

Cicconi wrote about a likely court battle as well as the possibility that the FCC could vote against the new rules in the future, should the political makeup of the commission change. “Partisan decisions taken on 3-2 votes can be undone on similarly partisan 3-2 votes only two years hence,” Cicconi wrote. “And FCC decisions made without clear authorization by Congress (and who can honestly argue Congress intended this?) can be undone quickly by Congress or the courts.”

Verizon (VZ), which could join AT&T’s legal fight against the new FCC rules, also weighed in following the vote, though the company adopted more of a mocking tone. The telecom giant actually went through the trouble of issuing a statement written in Morse code and titled “FCC’s ‘Throwback Thursday’ Move Imposes 1930s Rules on the Internet.” In a translated version of Verizon’s statement, the company chided the FCC for deciding “to change the way the commercial Internet has operated since its creation.”

In its own statement, Comcast said it supports the principles of an open Internet, but disagrees with the FCC’s decision to reclassify ISPs under Title II of the Communications Act — a move that allows for stricter government regulation of the Internet. A post written by Comcast (CMCSA) executive vice president David Cohen reads: “We fully embrace the open Internet principles that have been laid out by President Obama and Chairman Wheeler and that now have been adopted by the FCC. We just don’t believe statutory provisions designed for the telephone industry and adopted when Franklin D. Roosevelt was president should be stretched to govern the 21stcentury Internet.”

Various groups representing the telecommunications and cable industries also voiced their disapproval, including the National Cable & Telecommunications Association, Broadband for America, and CTIA – The Wireless Association. The U.S. Telecom Association also agreed with the FCC’s adoption of open Internet standards, but lashed out at the commission for its reclassification of ISPs. The association said in a statement that it “will now turn to the courts for review,” while also promising to work with Congress in the hopes of finding a bipartisan solution.

Republican politicians also spoke out against the FCC decision Thursday. In a letter signed by more than 20 Republican members of Congress, the lawmakers claimed that the new FCC rules “threaten the future viability of the Internet and America’s ability to compete in the global technology marketplace.” The lawmakers also promised to “not stand by idly.”

President Obama, who came out in full support of strict new net neutrality rules last fall, applauded the FCC for voting in the new standards Thursday. The president tweeted to express support for the FCC’s decision:

The @FCC just voted to keep the internet open & free. That's the power of millions making their voices heard. Thank you! #NetNeutrality -bo

Obama later issued a statement thanking the more than 4 million people who participated in an open comments period last year to voice their support of “a free and fair Internet.”

Meanwhile, Netflix, which has also been a vocal proponent of stronger net neutrality rules, issued a statement calling today’s vote a win for consumers. “The net neutrality debate is about who picks winners and losers online: Internet service providers or consumers. Today, the FCC settled it: Consumers win,” Netflix said. “Today’s order is a meaningful step towards ensuring ISPs cannot shift bad conduct upstream to where they interconnect with content providers like Netflix. Net neutrality rules are only as strong as their weakest link, and it’s incumbent on the FCC to ensure these interconnection points aren’t used to end-run the principles of an open Internet.”

In a blog post, Reddit cofounder Alexis Ohanian praised his social websites users, whom he said helped to raise public awareness around net neutrality through a campaign to comment on the FCC’s proposed Internet rules. In this case, he wrote, “the Internet rallied to create something that would protect our open Internet.”

Other Democratic politicians also took to Twitter (TWTR) their support for the FCC’s new rules:

I support the FCC’s decision to adopt strong net neutrality rules, and I'll work to preserve them.

An #OpenInternet spurs innovation, communication & economic growth. FCC's vote for #NetNeutrality is a victory for all of us.

Today’s #NetNeutrality ruling marks a huge victory for free speech. Thank you to everyone that stood up to keep the Internet open & free -Al