Despite complaints, Apple users are still listening to that free U2 album 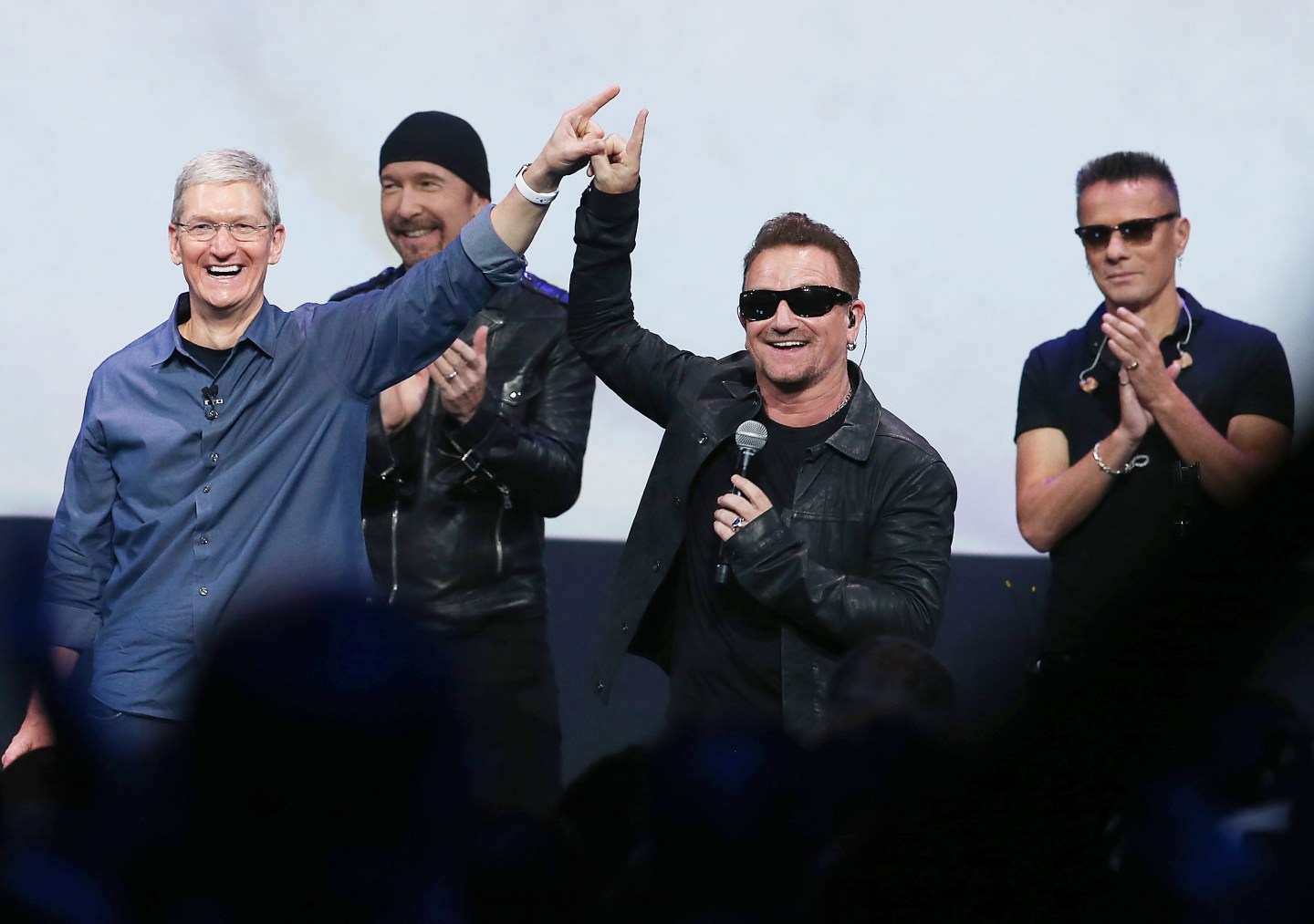 CUPERTINO, CA - SEPTEMBER 09: Apple CEO Tim Cook (L) greets the crowd with U2 singer Bono (2nd R) as The Edge (2nd L) and Larry Mullen Jr look on during an Apple special event at the Flint Center for the Performing Arts on September 9, 2014 in Cupertino, California. Apple unveiled the Apple Watch wearable tech and two new iPhones, the iPhone 6 and iPhone 6 Plus. (Photo by Justin Sullivan/Getty Images)
Photograph by Justin Sullivan—Getty Images

When Apple used its September iPhone launch event to announce it was giving away the latest U2 album for free, not everyone thought it was a “Beautiful Day.”

In fact, enough people complained about the album’s surprise appearance on their Apple devices that the company quickly cranked out a software fix to make it easier to delete the Irish rockers’ album, “Songs of Innocence.” The band itself even issued an apology for the creative marketing ploy, but that was after the company had already automatically uploaded the album to devices owned by its almost 500 million music customers across the globe.

Despite Apple (AAPL) customers’ consternation at the free — though, to be fair, unrequested — tunes, the gambit at least seems to have resulted in a lot of people listening to the new U2 album. Last October, Apple said that roughly 81 million people had listened to the album to some extent at that point. That’s about 16% of the company’s total music customers. Roughly 5% of Apple’s customers went ahead and fully downloaded the album.

Nearly five months later, though, are folks still cueing up the U2 album on their respective Apple devices and iTunes accounts? In a study released Monday, British market research group Kantar said the giveaway experiment helped U2 outpace all other artists when it came to the music Apple customers listened to in January.

Roughly 23% of all Apple music customers surveyed by Kantar listened to at least one U2 song last month and nearly all of those people — 95% — cued up at least one track from the new album that Apple gave away last fall. Of course, Bono’s bunch has been putting out music for a few decades, and U2 is typically regarded as one of the more popular rock groups ever, so it may not come as a huge surprise that the band has a spot in so many iTunes shuffle rotations. (It’s also worth noting that the September giveaway spurred a rise in sales for the band’s older songs, as well.)
[fortune-brightcove videoid=4065610230001]

However, U2 didn’t just eke ahead of its rival popular artists in January. The percentage of Apple customers who heard some U2 last month was more than double the percentage that listened to Taylor Swift. About 11% of people in Kantar’s survey heard a song last month by Swift, whose most recent album “1989” finished 2014 as the best-selling album of the year. Behind Swift was fellow pop singer Katy Perry — this year’s Super Bowl half-time show performer — who had 8% of Apple customers tuning in to her songs.

Kantar’s study looked at more than 2,500 iOS users who listened to music in January.