6 ways to tell whether you actually care about your privacy 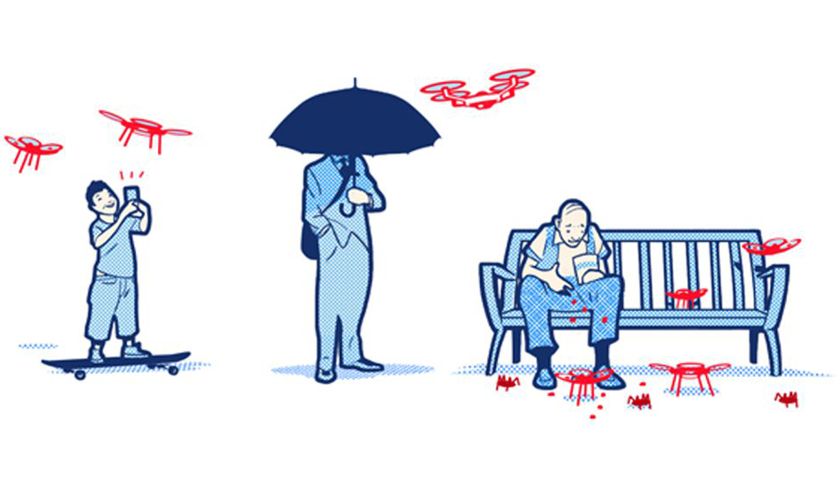 I was at a very businessy party in the San Francisco area the other night, filled mostly with people who ride the bubble to work every day. All anybody wanted to talk about was drones. “You should see the cameras on those things!” said my friend Woodley. “They could get a zit on the end of your nose at 600 feet up!” This upset me. I asked him: “You want somebody over your backyard like that?” “Hey, man,” he said, gazing at me as if I had just questioned the market value of Alibaba. “They’re here. You can’t stop them.”

I found his sang-froid interesting. It seems there are people who care about privacy and those who, after all is said and done, don’t. I wondered if there was a pattern, so I -commissioned my friends at the National Association for Serious Studies® to perform a Serious Study on this issue. I now report their findings.

Finding No.1: The primary determinant is age. The Level of Concern about Personal Privacy (LCPP) may be expressed as a traditional bell curve, with a fat bulge in the 25 to 54 demographic and near zero at the edges. The tentative conclusion here is that people attain a level of propriety in their middle years after a long period of heedless gestation, and that this period of maturity lasts for a while and then lapses.

Finding No.2: Financial status is a strong indicator of an individual’s LCPP. The curve starts low and goes off the chart as people have more to protect, and peaks around 3 a.m. when an iPhone alert informs you that your bank or health provider has been hacked into by idiots in Romania.

Finding No.3: The highest level of concern is among businesspeople who conduct work online, because …

• The business day is long and tedious, and email and IMs are always at hand.

• Everybody uses email and messaging systems for personal and at times intimate purposes, from blowing off steam and making jokes to setting up inappropriate, immoral, or, sometimes, marginally legal assignations and plans.

• People take and store photos that they really shouldn’t.

• There’s no way to really erase anything, really.

• The Corporation knows every keystroke you make, including those in pursuit of stupid things that shall remain nameless in this report.

Finding No.4: Nobody cares about Other People’s Privacy. Ancillary points to be noted in this startling finding are …

• Disregard is greatest among the young and/or greedy. The same teens who will wander into your room without knocking have no problem snooping into your database when they go into either hacking or marketing.

• Equal levels of contempt for your privacy are registered by all vampires who make their living feeding off big data. When asked whether they believe they have the right to suck off the personal information they just gleaned from an individual who just made a transaction, they will look at you as if you just arrived on a shuttle from Planet Mambo.

• The media will print anything that comes out about you, no matter how it was obtained, and people will have no problem consuming it with glee. This is true about little people as well as big ones.

Finding No.5: There is a strong inverse proportion between addiction to sharing and concern about privacy. That is, the more an individual tweets, Facebooks, and Snapchats, the less his own or anybody else’s privacy matters to him. Personal privacy is a casualty of social media. As long as the latter thrives, we’re all a few keystrokes away from the invasion of the body snatchers.

Finding No.6: There is a camera looking at you right now.

Those are the findings. Documentation, charts, and underlying data for this study are proprietary. You know what that means? Look it up.