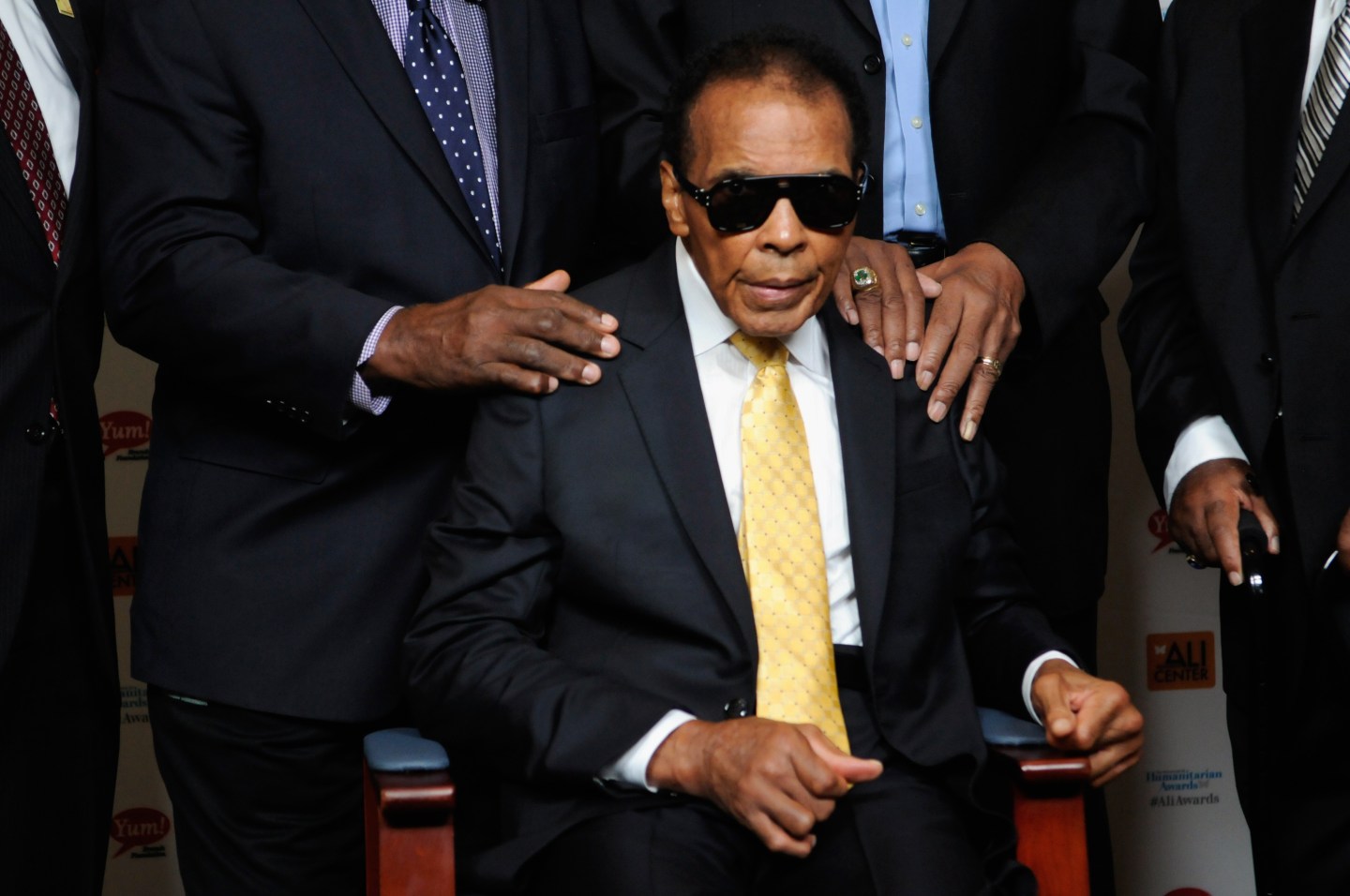 Under Armour — already one of the leading activewear brands in the country — just announced a major new celebrity endorsement deal.

Is it an big time NBA Star? An up-and-coming quarterback? A contender to win the 100 yard dash in the 2016 Rio Olympics?

Nope, none of the above. It’s Muhammad Ali, the legendary boxer known in the 1960s and 70s for his over-the-top personality, his crafty moves in the ring and his outspoken politics. Ali’s brand will appear on UA gear starting later this year as part of a deal between Under Armour and the company that owns Ali’s licensing rights, ESPN reports.

Ali, though, hasn’t fought professionally since 1981. He’s 73 years old. Lets face it, a lot of millennials probably picture Will Smith — who starred in a biopic about the pugilist — when they hear Ali’s name.

But Ali is far from the only aging athlete still cashing checks on endorsement deals. Here’s five others who still make bank on long ago accomplishments.

NEW YORK, NY - JULY 31: Pele attends an event where he is named the newest addition to the Subway famous fan roster at Chelsea Piers Field House on July 31, 2013 in New York City. Pele Edson Arantes do Nascimento, better known as Pele, a retired Brazilian footballer regarded by many experts, football critics, former players, current players and football fans in general as the best player of all time. (Photo by Slaven Vlasic/Getty Images)

The Brazilian futbol wizard, who became famous stateside playing for the legendary New York Cosmos in the 1970s, is still raking in big money to lend his name and face to products. Who could forget his awkward commercial, aired during last summer's world cup in his native country, featuring Pelé and Olympian Michael Phelps?

Jack Nicklaus lines up a putt on the third hole during the first round of the Big Cedar Lodge Legends of Golf presented by Bass Pro Shops at Top of the Rock on June 6, 2014 in Ridgedale, Missouri.

With Tiger Woods' recent decline in performance, The Golden Bear's record number of major wins may be safe. His bank account is also safe. The retired golfer still brings in big bucks in endorsements, including an endorsement for pet health company VetIQ (Nicklaus and his wife are big dog lovers.)

You can't include Jack without talking about Arnie. Palmer, Nicklaus' long-time rival, still has big money endorsements even as an octogenarian. Among other products, Palmer endorses Callaway Gold Clubs and Ketel One Vodka, the two things most people need to have fun on the golf course.

LONDON, UNITED KINGDOM - OCTOBER 20: Former world heavyweight boxing champion George Foreman poses with his trademark grill on October 20, 2006 in London, England. He is in London to celebrate the tenth anniversary of his iconic brand and to officially launch a new fundraising partnership between George Foreman Grills and the British Heart Foundation - with the aim of raising GBP300,000 for the charity. (Photo by Jeremy O'Donnell/Getty Images)

Ali is joined on this list by one-time nemesis George Forman, perhaps the most famous athlete endorser of all time. Since the mid-90s, Forman has been hawking his "Lean, Mean, Fat-Reducing Grilling Machine."

OK, so this is a bit of a stretch on the word "old," but Jordan has so many endorsements more than a decade after he left the court you can't not include him. His Airness still endorses Nike, Hanes and other brands.