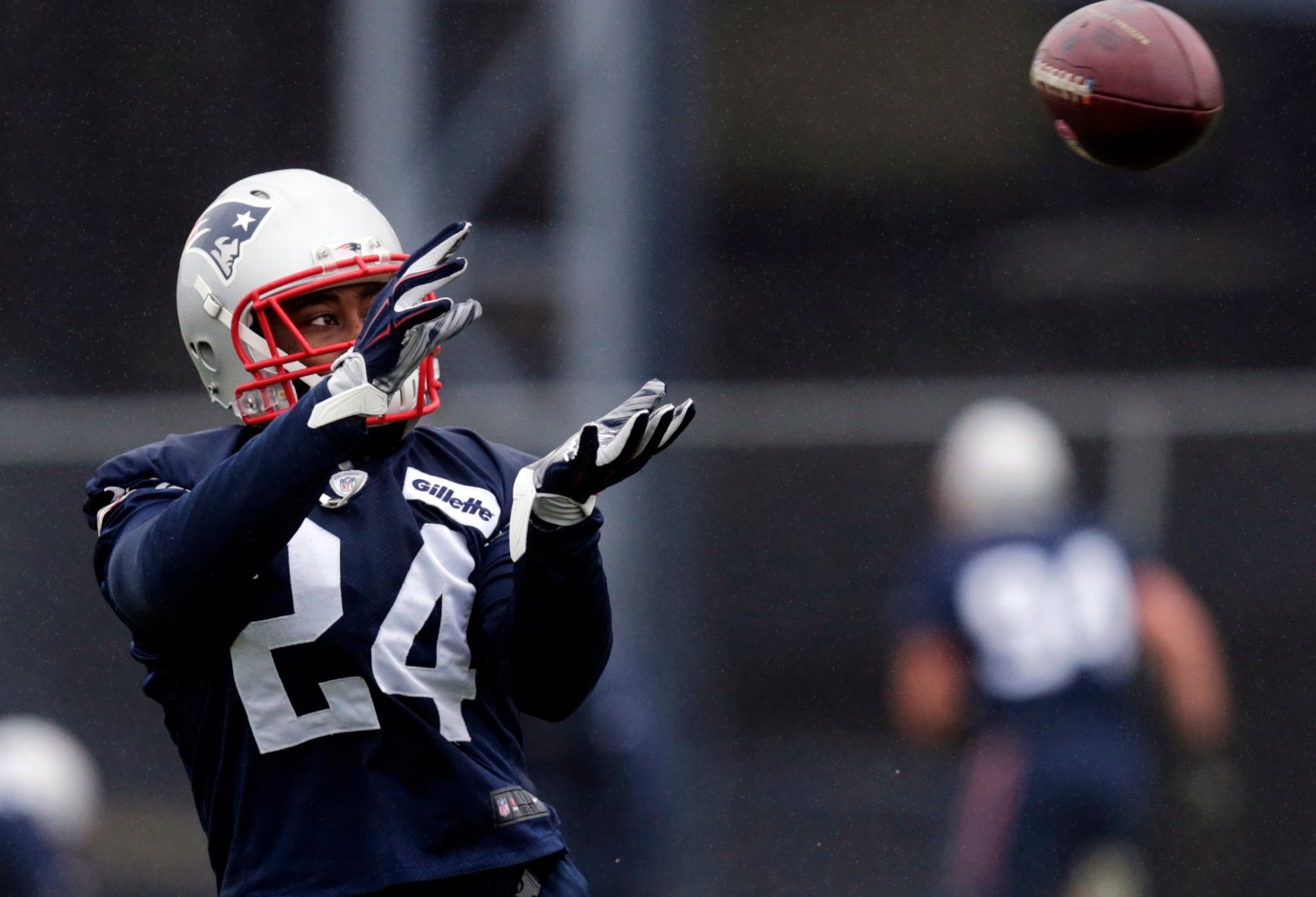 Hand it to the folks at Steaz, an organic iced tea, for savvy timing with its latest sports endorsement deal.

The brand announced that it had signed New England Patriots cornerback Darrelle Revis as a new “brand ambassador” on January 17, the day before the Patriots played in the AFC Championship Game against the Indianapolis Colts. The Patriots, with Revis on the field, went on to win that football game and also win, in suspenseful fashion, Super Bowl XLIX against the Seattle Seahawks.

Revis made a name for himself during his time with the New York Jets, when he earned the nickname “Revis Island” for his ability to defend the endzone and keep opposing receivers from scoring. He is a big name in the National Football League—Nike (NKE) even makes the Zoom Revis, a football-inspired sneaker—but off the field, it has long been difficult for players in defensive positions to become highly marketable the way that a quarterback can. (With some exceptions: Green Bay Packers linebacker Clay Matthews and Houston Texans defensive end J.J. Watt have each appeared in television commercials and hawked various products.)

Now, a few weeks after his team’s big Super Bowl win, Revis took a moment to speak to Fortune about his deal with Steaz, how he approaches off-the-field deals in general, how his teammates approach them, and how much branding potential an NFL cornerback has these days.

Fortune: How did the Steaz deal come about?

Darrelle Revis: I’ve been drinking it for three years, in all honesty, and then one day I was just sitting there, and I thought, I should partner up with them. I made the call.

What other endorsements do you have and what’s your approach with things like this? Do you make as many deals as you can?

I’m a Nike athlete, and in the past I’ve been endorsed by Range Rover, and Bose right now. I think it’s about tying yourself to great organizations that believe in you. Organizations like Nike, that have respect.

[Author’s note: Bose is the official headphone partner of the NFL, but a number of players have endorsement deals with Beats By Dre, which is effectively banned on the field by nature of the Bose deal. See: Benched: Beats by Dre and the other brands banned in the NFL.]

Do you discuss endorsement deals with your teammates, or is that something everyone keeps to themselves?

Well, Tom [Brady] has a bunch of brands he’s attached to. I talk to him about that. It’s like, you get a package at your locker and everybody huddles around and wants to see what’s in the box. So I had a bunch of Steaz sent to me at my locker and everyone was asking about it, making jokes. You have to explain what it is, like, ‘Well, it’s green tea, it’s all natural, it tastes good…’ And my teammates, all the time, as soon as I get a package, they’re like, ‘gimme some of that.’

Do you think often about your brand off the field, and try to expand it? Is there anyone in the league you ask for advice about how to do it?

That’s one of the biggest questions to look for a great answer on, from guys who’ve been there. Tom, he’s fifteen years in, he’s been at the top of his game for so many years, so having those guys in the locker room who’ve been there and done it is a good resource. Sitting down and talking to those guys, like Tom, or even just looking at them—Eli Manning or Drew Brees—at how they stay professional and how they carry themselves, you definitely take a look at what they’re doing, how they’re branding themselves and how they’re making money off the field.

You do have to brand yourself. And do it the right way. Those guys, straight down the line… Eli, Peyton Manning, Tom, Andrew Luck, Russell Wilson, [Colin] Kaepernick, they’re all doing it right.

But they’re all quarterbacks.

(He laughs.) That’s right. I’m a defensive player and I’m just trying to find my own way. Things are working well for me in a lot of ways. I’m not a quarterback, but I do look at those guys for ideas.

It’s always been hard for guys in defensive positions to establish big brands. But is the cornerback position getting more recognition lately? Richard Sherman, for example, you see all over television now.

Absolutely. Richard is one of the best in the league and he’s continued to make a name for himself, which is awesome. And we’re in the same position. We’re all DBs [defensive backs], and it’s a DB family. Richard is helping everybody out.

[Author’s note: On the field, the two certainly have a rivalry going. During this year’s Super Bowl, after a third-quarter Seahawks touchdown by Doug Baldwin, Richard Sherman appeared to taunt Revis by holding up a “24,” Revis’s jersey number, suggesting the touchdown was his fault.]

I do feel like after Deion [Sanders], there kind of was a drop-off for a long time. And then you have Champ Bailey come along, and Charles Woodson, and it really brought back that “shutdown corner” feel to the game. So you know, the guys in the league today, Richard Sherman, Patrick Peterson, Joe Haden… [Aqib] Talib… guys who are making a name for being shutdown corners, it’s pretty awesome. Everybody plays the game differently, but at the same time, overall, it’s shining a light on the DB group of guys and what we do every Sunday. It means more business opportunities.

As you build your brand more and get more visibility, are there risks of that spotlight? I’ve heard a lot of athletes talk about constantly being approached by old friends, or even family, looking for them to invest in their business idea.

The real world is pretty crazy. There are a lot of vultures out here and you have to be careful who you do business with. I’m a laid back guy, I’m easygoing, and I get approached all the time about business ideas or endorsements, but you have to weed out the bad ones and figure out what’s really genuine and organic for you. You just try to be careful. You have to know what’s a good deal and what’s a bad deal for you and go from there.

Do you think about life after football, and consider getting involved in business?

That’s always been up in the air. What do I want to do outside football? I’ve got a couple small business ventures already, but in general I look at people who’ve done it well, I look at Drew Brees, I look at the guys who are very successful on and off the field. I’m trying to follow the same lane.