We must stop meeting like this: hopes low as time runs out for Greece 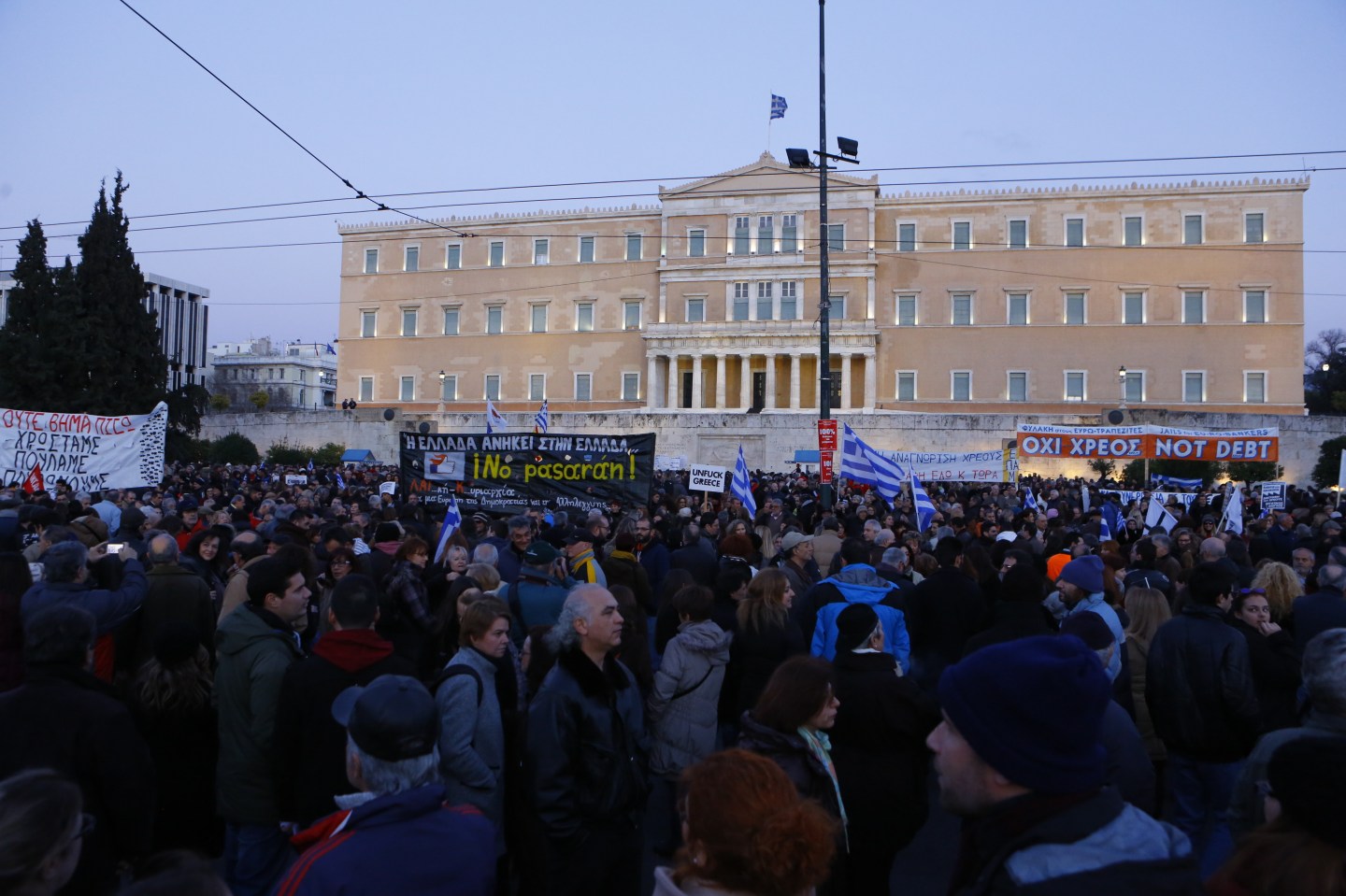 SYNTAGMA SQUARE, ATHENS, ATTICA, GREECE - 2015/02/15: Tens of thousands of people have assembled in Syntagma Square. Tens of thousands Greeks came to the third pro government protest in Athens within a week. They were showing their support in the Greek anti-austerity policies ahead of the Eurogroup meeting next week. (Photo by Michael Debets/Pacific Press/LightRocket via Getty Images)
Photograph by Michael Debets — Pacific Press LightRocket via Getty Images

The countdown to default and Eurozone breakup is on.

Finance ministers from around the Eurozone are meeting in Brussels Monday for what will be the third session of fraught talks in less than a week on how to talk Greece’s new government off the window ledge and persuade it to carry on servicing its crushing debt burden with a deal that would keep it from defaulting and leaving the currency union.

Negotiators have been at work over the weekend trying to find some kind of face-saving formula that will allow all sides to claim a victory, but comments out of Berlin Monday morning suggested that a deal will be hard to achieve this evening.

“Judging by what I’ve heard from the technical talks at the weekend, I’m very skeptical, but we’ll get a report today and then we’ll see,” German finance minister Wolfgang Schaeuble told the radio station Deutschlandfunk in an interview.

Greece’s bailout program is due to expire at the end of the month. From that moment, it will lose access to the final €7.2 billion earmarked for it that haven’t been paid out yet because the previous government failed to meet all of the conditions for disbursement. Greece’s new government, led by the left-wing Syriza party, needs that money to make a big debt repayment in March, but refuses to accept the conditions for getting it. It also wants to reverse many of the structural reforms made by the last government as part of the bailout.

Greece’s Finance Minister Yanis Varoufakis repeated Monday, in an op-ed for the New York Times, that his country is essentially bankrupt and that there is no point in asking for more loans to cover that up.

“The ‘extend and pretend’ game that began after Greece’s public debt became unserviceable in 2010 will end,” he wrote. “No more loans — not until we have a credible plan for growing the economy in order to repay those loans, help the middle class get back on its feet and address the hideous humanitarian crisis.”

Financial markets had rallied last week in the hope that the two sides were getting closer to some kind of deal as Syriza officials dropped their insistence on having half of Greece’s bailout loans written off. But the Athens stock market fell over 4% Monday as the gap between the two sides continued to look unbridgeable.

In the absence of a broader agreement on debt forgiveness, the breathing space that Varoufakis is seeking can only be bought by allowing the Greek government to borrow more from its banks on a short-term basis, something that the creditors (especially the European Central Bank) refuse to countenance.

The weakness of Greece’s negotiating position is becoming increasingly clear. Data published last week showed the economy started to shrink again in the final quarter of last year after three straight quarters of growth, while anecdotal reports suggest that the outflow of deposits from the country’s banks accelerated this month. And other figures out Friday showed a sharp drop in government tax receipts in December, leaving the ‘primary’ budget surplus (i.e. before interest payments) well short of target. With a primary surplus, a government can theoretically ‘afford’ to stop servicing its debts because it can still pay the day-to-day costs of public services. However, December’s figures show how difficult it will be to sustain a primary surplus amid the economic disruption that a default would bring with it.