Your Valentine’s Day flowers’ journey from farm to vase, in 9 steps 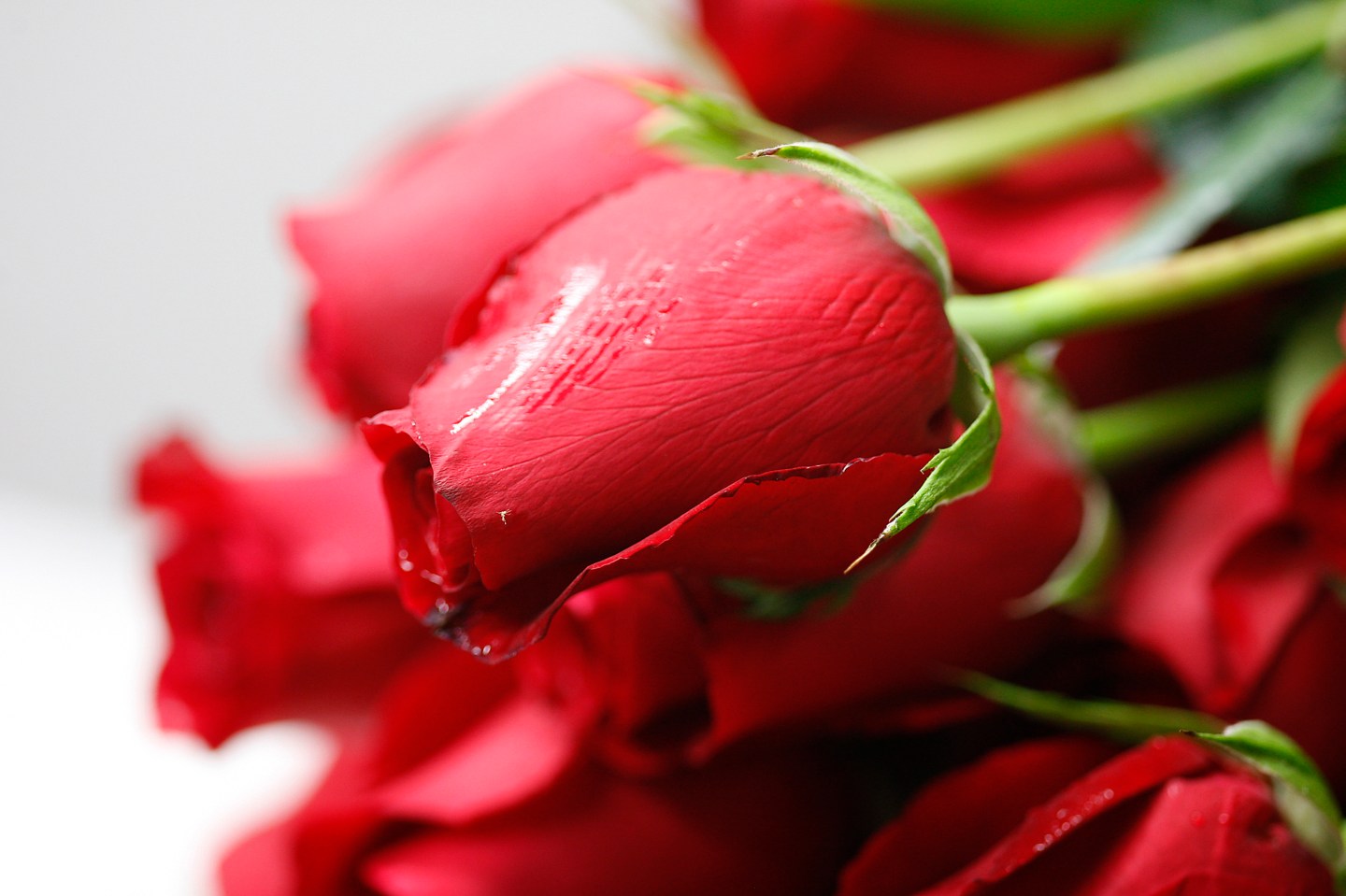 LOS ANGELES, CA - MAY 7: Roses, imported from Ecuador for Mother's Day, sit to be inspected by US Customs and Border Protection (CBP) agriculture specialists for pests and diseases on May 7, 2012 in Los Angeles, California. On a typical day, the CBP seizes about 4,436 prohibited plant, meat and animal byproducts and finds 570 agricultural pests from abroad that could harm US agriculture. (Photo by David McNew/Getty Images)
Photograph by David McNew — Getty Images

What’s behind that bouquet of roses you receive on Valentine’s Day? Love? Sure. Lust? Maybe. But beyond all that mushy stuff are the practical wheels of business, turning just so to ensure that the flowers you receive are bright, fresh, and—most importantly—on time. 1-800-Flowers gave Fortune a peak at how they manage to deliver 5 million Valentine’s Day roses in the dead of winter.

A Colombian flower grower picks up roses ahead of Valentine's Day in Facatativa, Colombia.

If you really love your roses, thank the sender—such a sweet gesture!—and then express gratitude to the Republic of Colombia because that’s probably where they came from. Chris McCann, president of 1-800-Flowers.com, says that 65% of his company’s Valentine’s Day flowers come from South America—Colombia, primarily. Twenty-five percent are produced domestically, mainly in California, and the other 10% come from various locations around the world.

2. No country for free range flowers

ATTENTION EDITORS - IMAGE 3 OF 40 FOR PICTURE PACKAGE 'THE VOYAGE OF THE ROSES' A worker prepares roses for export before the upcoming Valentine's Day at Rio Roses greenhouse in Cayambe, Ecuador February 8, 2012. Ninety percent of the flowers Americans will give to their sweethearts on February 14 are imported, and nearly all of those imports originate in Colombia and Ecuador. Plus, they must get from the fields to the flower shop to the recipient's vase at precisely the right moment: Late flowers aren't exactly the height of romance. Picture taken February 8, 2012. REUTERS/Guillermo Granja (ECUADOR - Tags: BUSINESS SOCIETY) - RTR2XRRN

The bush from which your roses came is at least two years old. It takes that long for the plant to mature enough to produce a harvest worthy of Valentine's Day. 1-800-Flowers works with just three or four key growers every year, though some of them operate large networks of as many as 25 farms that range from 10 hectares (two-and-a-half acres) to 400-plus. And if you’re imagining open fields of row after row of roses bushes—free-range roses, if you will—that rustle in the wind and soak up the sunshine, stop. These flowers are grown in controlled greenhouses—some in soil, some in hydroponics.

A customer selects roses at a flower shop ahead of Valentine's Day in southwestern China's Chongqing municipality February 13, 2007. In a sign of the increasing influence of Western customs on Chinese culture, the celebration of love has become a hugely popular festival in China in recent years. Picture taken February 13, 2007. REUTERS/Stringer (CHINA) - RTR1MDFV

A worker selects roses for export before Valentine's Day at Elite Flowers in Facatativa February 6, 2013. Valentine's Day is marked on February 14, with many people giving loved ones flowers as a token of their affection. But a troubled global economy has some growers in Colombia worried about this year's crop. REUTERS/John Vizcaino (COLOMBIA - Tags: BUSINESS ENVIRONMENT) - RTR3DEV3

1-800-Flowers takes its first step toward meeting Valentine's Day demand a few weeks after Valentine's Day the previous year, when it sends growers its “stem guidance,” or projections of how many flowers of which varieties it expects to need next year. 1-800-Flowers has to predict not just who will want flowers and how many flowers they’ll order, but also to whom those flowers will be sent. “Demand is one side of the equation,” says Tom Hartnett, president of the company’s consumer floral brand. “You might live in New York, but you're delivering something to California.” What’s the best predictor of that? History. That’s “one thing we have on our side,” Hartnett says. “We’ve been in business for almost 40 years, so we have a lot of rich data,” says Mark Smith, vice president of operations.

Roses can be easy-or difficult-to nuture, depending on the types you buy. An example of a proper cut on a rose bush. (Dave Bowman/Newport News Daily Press.KRT)

Another critical step is something called “pinching,” when the grower cuts back a rose bush to ensure that it will bloom in time for Valentine's Day. This year’s roses were pinched in late summer. They then bloomed in time for a Christmas harvest and will bloom again for Valentine’s Day. A harvest in February means they’ll bloom a third time—rather conveniently—around Mother’s Day. A pro-tip from McCann: there are lots of rose sales in the summer because the bushes will bloom a fourth time. “Roses are abundant and the demand is lower.”

Red roses packed for despatch wait for transportation at the International Flower Auction Bangalore (IFAB) Limited on the eve of Valentine's Day in Bangalore on February 13, 2012.

If there’s one key to 1-800-Flowers’ supply chain for Valentine’s Day roses, it’s what McCann calls the “cold chain.” Once farm workers pluck roses from the bush, they’re placed in a wagon or a sack like a mail carrier’s. Then the flowers are trimmed for stem and head size and piled into what the industry calls a half box, a 12-inch by 10-inch by 30-inch container that’s pre-cooled with cold air pumped into one side of it and heat absorbed from the other. "Once that flower is cut, we want to get it down to a 34-degree temperature, which basically suspends life until it gets into the flower shop. That provides our customers with the longest [flower] life," McCann says. Once farm workers place the flowers in these boxes, they're hauled to the airport where a plane takes them into Miami International Airport.

Customs agents check in-coming flowers at the Miami airport Thursday, Feb. 3, 2011. Amid the peak Valentine's Day flower season, U.S. agents in Miami are working overtime to make sure pretty love bouquets are not used as transportation by exotic South American pests or cocaine traffickers. More than eight out of every 10 cut flowers imported to the U.S. come through Miami International Airport. Customs and Border Protection officials on Thursday were checking thousands of boxes of roses, carnations and other varieties for insects that could damage American agriculture. Officials find around 90 such pests every day. Colombia and Ecuador are the main sources of imported flowers, with Colombia also a leading cocaine producer. Immigration and Customs Enforcement officials are, also, using X-rays and metal probes to check for drug shipments.(AP Photo/J Pat Carter)

More cut flowers are cleared through Miami International than any other airport in the United States. Why? Because the airport is in close proximity to South America and because “it’s just what has developed over the years,” McCann says. The airport’s floral customs area is refrigerated, which ensures that the flowers will stay fresh. “That didn’t used to be the case, ya know, 25 years ago. You would run into problems where if it was a real hot day or customs was moving too slowly the boxes would be sitting out on the heated tarmac,” he says. “It’s gotten more sophisticated.”

8. On the road again

From there, the flowers are loaded onto trucks on contract with 1-800-Flowers that specialize in transporting cold goods. (The company uses trucks because it’s harder to ensure that flowers stay cold on rail or air transport.) “The trucking companies that we use are pretty much dedicated to the floral industry,” says McCann. Their containers are—of course—refrigerated, plus they do things like add granular ethylene gas prohibitors to the back of the truck. Here's a botany refresher: once you cut any plant, it effectively starts to decompose, which produces ethylene gas, says McCann. “The greens on a stem could start producing ethylene gas that could hurt the flower.”

NEW YORK - FEBRUARY 13: Men load roses into a van for delivery on the day before Valentines day in the flower district on February 13, 2009 in the Manhattan borough of New York City. The sluggish economy has dampened flower sales for Valentines Day. (Photo by Rick Gershon/Getty Images)

1-800-Flower’s fleet of trucks hauls the flowers to the 7,000 independent florists in the United States that fulfill and deliver 1-800-Flowers orders to homes and offices.

Always have a contingency plan. Always.

The company’s dependence on truck transport means that bad weather could knock steps 7 through 9 entirely out of whack. See under: Winter Storm Pax, February 2014. The blizzard carpeted parts of the Northeast U.S. with between one and three feet of snow. “We had frozen country throughout the Southeast and up though part of the Northeast and Midwest,” McCann says. “It caused major disruption to our normal holiday.” As the company saw the storm coming, they deployed what they referred to internally as “Lovestorm,” which required making deliveries one or two days early to ensure recipients got their products before the storm hit. “We notified customers that because of impending weather we’re delivering your product a day early,” he says. “Those audibles are being called constantly.”

Catering to a class of slow-pokes

CHONGQING, CHINA - FEBRUARY 13: (CHINA OUT) A vendor clips a rose at a flower shop on February 13, 2007 in Chongqing Municipality, China. As the Valentines Day festival draws near, sales of flowers are booming and businessmen are making promotions focused on the day. (Photo by China Photos/Getty Images)

It should be noted that with this supply chain, “a flower cut today [can] be available for sale tomorrow,” McCann. Flower arrangements that are delivered this Valentine’s Day will likely be harvested on Thursday, since things move a bit slower on the weekend. After Saturday, the process will soon start all over again, as 1-800-Flowers’ preps for Valentine’s Day 2016. It’s ironic that the company plans so far in advance for customers who are proven procrastinators. Seventy percent of its Valentine’s Day orders are placed within five days of the holiday and 50% are placed for same-day delivery. “We try to get our male customers to plan ahead," McCann says, "but you know what that’s like.”