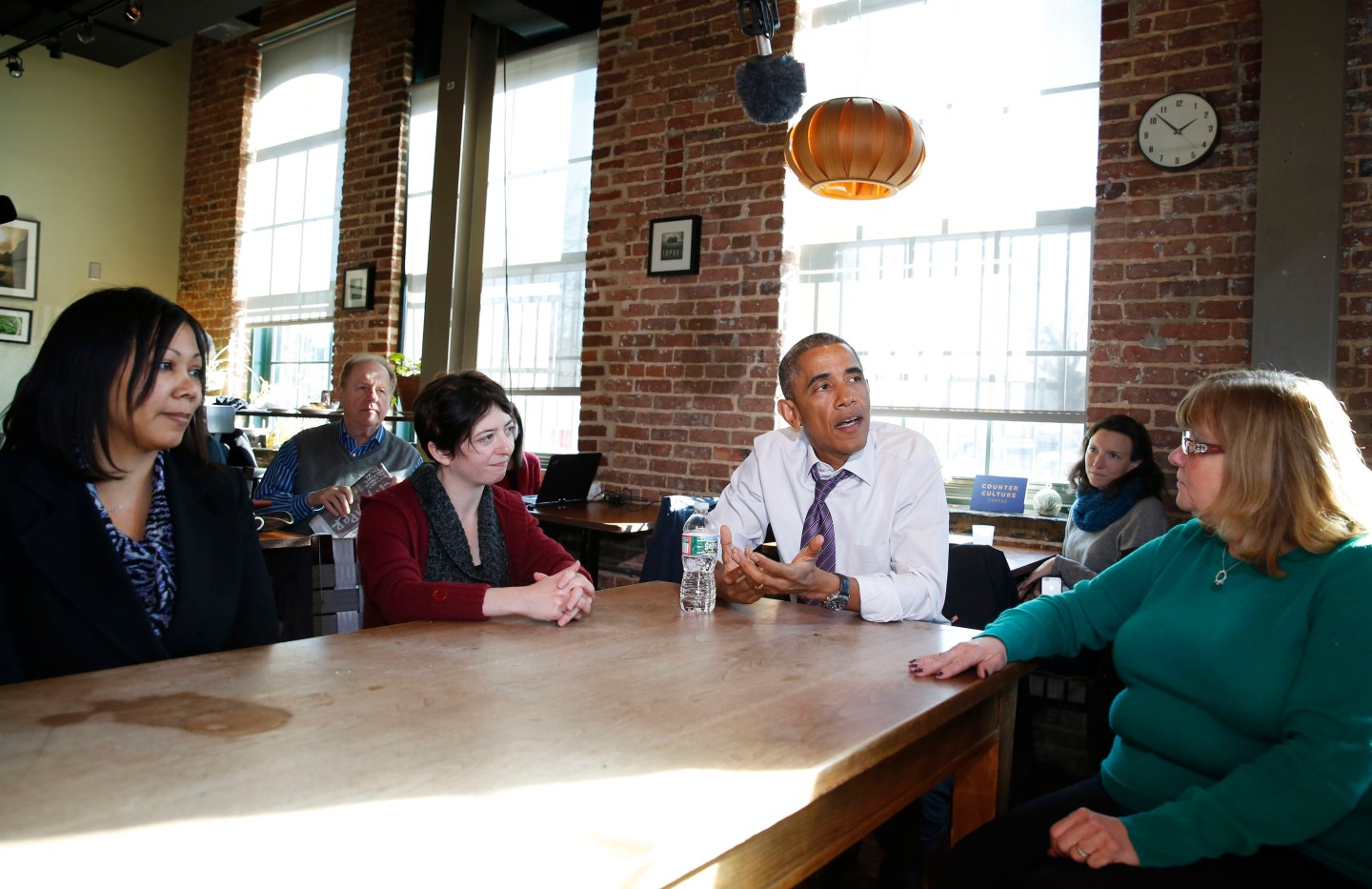 There’s no doubt about it, the paid sick leave movement is on a roll.

When residents of Massachusetts; Oakland, Calif.; and Trenton and Montclair, N.J. were asked if they wanted their local governments to require employers to offer workers paid sick leave on ballots in November, they voted yes in every instance.

President Barack Obama presented his proposal for universal paid sick days building on that momentum: “Let’s put it to a vote right here in Washington,” he said. “It’s the right thing to do.”

This year, paid sick leave laws seem primed to extend that winning streak. In late January, Tacoma, Wash. passed legislation that requires employers to give workers at least three days of paid sick leave. Washington State is considering a statewide sick leave bill, as is Maryland. Chicago voters are set to vote for paid sick days in a non-binding referendum later this month, and lawmakers in Philadelphia are currently debating the issue.

But as the wave of legislative and ballot initiative wins continues, there’s a counter trend spreading across the country that aims to kick the legs out from under future victories: statewide laws preempting local governments from instituting their own paid sick day mandates.

Eleven states have passed measures that ban municipalities from passing paid sick leave laws, according to Ellen Bravo executive director of Family Values @ Work, which advocates for family-friendly workplaces. Missouri could be the 12th state to do so. Last week, State Representative Caleb Rowden, a Republican, introduced legislation that would institute a state-wide ban on local laws that raise the minimum wage, require employers to offer paid sick leave, and prohibit employers from inquiring about candidates’ criminal convictions early in the application process. (Missouri Governor Jay Nixon is a Democrat, but Republicans’ dominance in the legislature is enough to override his veto power.)

Rowden did not return requests for comment, but he when announcing the bill, he said it would ensure that businesses don’t have to deal with confusing and complex regulations that vary across the state and will protect businesses from activists on local city councils who want to attack job creators and hurt the middle class. On Twitter, he said that the legislation was intended to “protect small businesses from overreaching and unbalanced regulation.”

Eliminating the hodgepodge of local laws is a common refrain for advocates of statewide preemption laws, says Gordon Lafer, an associate professor at the University of Oregon’s Labor Education and Research Center. That was the rationale for a law that Florida Governor Rick Scott signed in June 2013. The bill, which had the support of Walt Disney World, Darden Restaurants, and the Florida Chamber of Commerce, “fosters statewide uniformity, consistency, and predictability in Florida’s employer-employee relationships,” Scott said in a statement at the time.

“What gets said is, ‘We shouldn’t have this mish-mosh of different laws; we want a state standard, and the state standard should be nothing,’” Lafer says.

Arguably, the most notable preemption law was passed in Wisconsin in 2011, when legislators approved legislation that repealed Milwaukee’s sick leave law—even though it had passed by ballot initiative in 2008 with 69% support—and prohibited local ordinances from requiring businesses to provide paid sick leave to employees. Wisconsin Governor Scott Walker said the law would guarantee regulatory consistency. “Patchwork government mandates stifle job creation and economic opportunity,” he said. “This law gives employers the flexibility they need to put people back to work and that makes Wisconsin a more attractive place to do business.”

Lafer says that a lack of public awareness might have helped states push sick leave preemption bills through the legislative process—workers may know less about paid sick day benefits than they do about something like the minimum wage.

President Obama’s spotlight on paid sick leave in his State of the Union address may have pulled the issue out of the shadows. At the same time, Americans were not blind to the issue beforehand. The Public Religion Research Institute found that 81% of its respondents to a survey last year were in favor of the type of sick leave legislation that Obama is proposing, including 70% of Republicans.

The debate over sick leave this year may turn into a race to see if advocates can build enough awareness and support such laws before legislatures that oppose the benefit act to ban them.