Is Putin on the verge of victory in Ukraine? 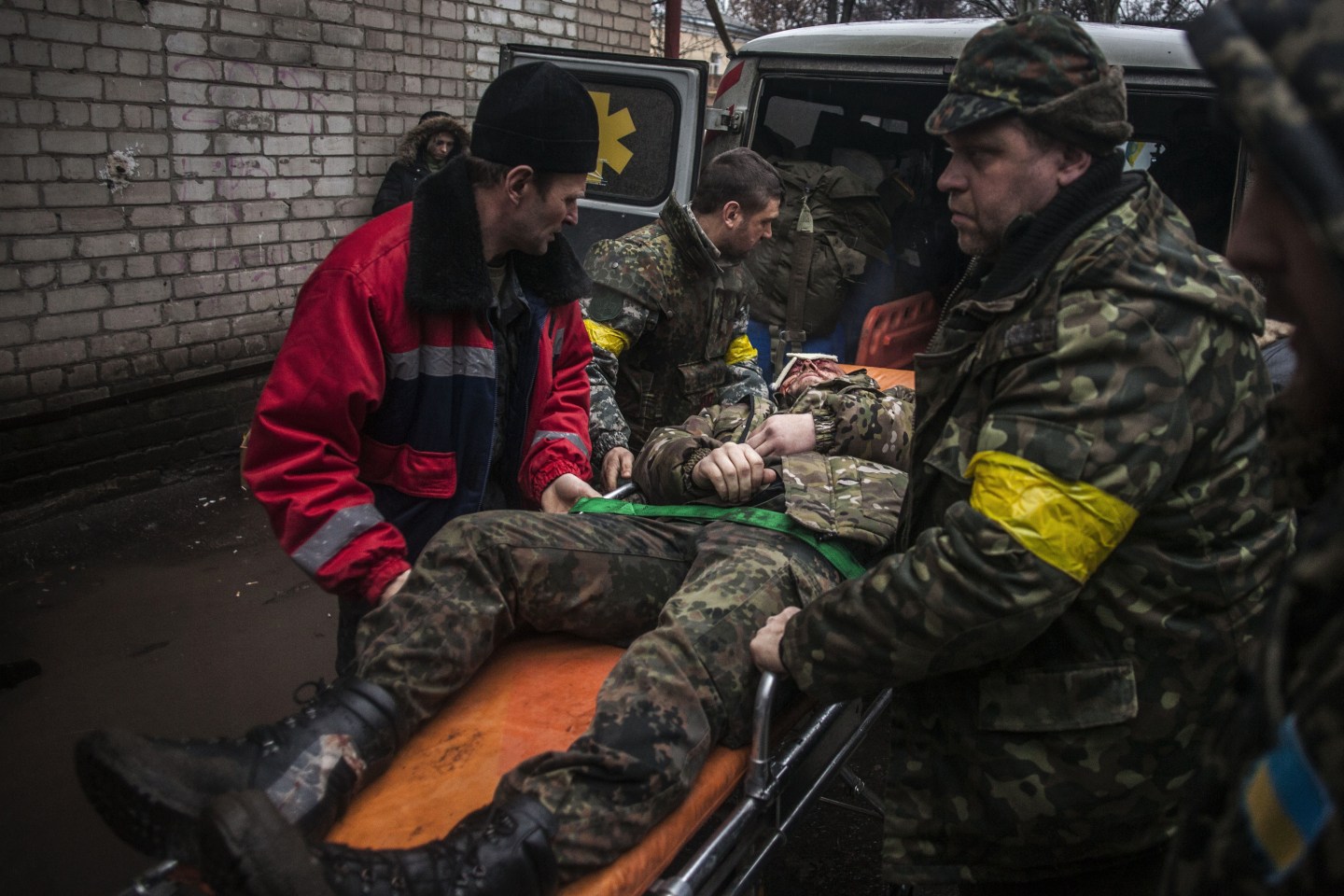 Ukrainian soldiers assist another soldier, wounded during clashes with pro-Russian separatists near Debaltseve, on a stretcher out of an ambulance at the hospital in the Ukrainian-controlled town of Artemivsk, in the Donetsk region, on February 2, 2015. Pro-Russian separatists vowed on February 2 to mobilise up to 100,000 fighters for their latest east Ukraine offensive as the United States mulled sending weapons to Kiev's outgunned forces after the latest truce bid collapsed. AFP PHOTO / MANU BRABO (Photo credit should read MANU BRABO/AFP/Getty Images)
Photograph by Manu Brabo — AFP/Getty Images

The optimists would call it another iteration of the Good Cop-Bad Cop strategy that the U.S. and European Union have sometimes tries to use to contain Russian President Vladimir Putin’s ambitions in Ukraine.

But the reality is much harsher. As Chancellor Angela Merkel and French President François Hollande fly into Moscow for peace talks Friday, the weakness of their hand is clear: the only thing collapsing faster than the front line in Ukraine’s disputed eastern provinces is its economy, and Europe’s major powers are in no rush to prop up either.

Neither France nor Germany wants to send arms to Kyiv to help it defend itself, and neither wants to send money to prop up an administration that has done little to tackle endemic corruption since it came to power last year.

That means that the only way they can influence Russia to stop supporting the separatists’ war is by threatening further sanctions, a policy hamstrung by internal divisions within the E.U.. Leaked documents suggest that the next round of “restrictive measures” planned by the E.U. only adds a few mid-ranking officials and state-owned companies to the sanctions list–hardly an effective deterrent to a full-scale offensive that began with an artillery bombardment of the city of Mariupol at the end of January.

White House press spokesman Josh Evans admitted at a press conference Thursday that sanctions “(haven’t) resulted in the kind of decision-making we’d like to see from the Putin regime.”

Although U.S. diplomats say the Merkel-Hollande trip has the U.S.’s blessing, the differences in approach is unmistakeable. Both a Republican-controlled Congress and President Barack Obama’s nominee for Defense Secretary, Ashton Carter, are more than open to sending weapons to Ukraine to rebalance the military conflict and impose a higher cost in human lives on Russia for its support for the rebels.

“We need to support the Ukrainians in defending themselves,” Carter said at his nomination hearing earlier this week.

Secretary of State John Kerry, meanwhile, said that “We want a diplomatic solution but we cannot close our eyes to tanks crossing the border from Russia…into Ukraine.”

Merkel is bitterly opposed to military escalation, something she impressed upon Ukrainian President Petro Poroshenko at a meeting in Kyiv lasting several hours Thursday.

Merkel’s spokesman, Steffen Seibert, said she and Hollande would base their talks with Putin Friday on the nine-point memorandum that was the basis for the now-defunct ceasefire in September last year, albeit in a context that gave the separatists more local powers. However, that would still require them to give up ground they have conquered since then, at a time when they are still advancing. It would also, of course, leave Russia in possession of Crimea, which it annexed last year.

Meanwhile, the hryvnia, Ukraine’s currency, lost nearly half its value against the dollar Thursday as the central bank was forced to stop supporting it, having nearly exhausted its foreign reserves.

Ukraine’s economy shrunk by 6.7% last year, due largely to the loss of Crimea and the devastation of the Donetsk region, home to much of the country’s industry. It’s forecast to shrink another 4% this year, and the International Monetary Fund reckons it needs at least $15 billion to avoid bankruptcy. That funding gap makes a nonsense of the IMF’s existing $17 billion program.

By contrast, Russia’s economy and financial markets are starting to sense that the worst may be over for them, encouraged by the rebound in crude oil prices and by an enthusiastic reception from foreign investors for a $150 million stock offering by supermarket chain OAO Magnit earlier in the week. Domestic political support for Putin has also stayed strong, despite the face that inflation rose to 15.9% in January, its highest level in 16 years.

The ruble has stabilized over the last week, and the benchmark RTS stock index was up 2.4% Friday as hopes for a favorable deal rose.