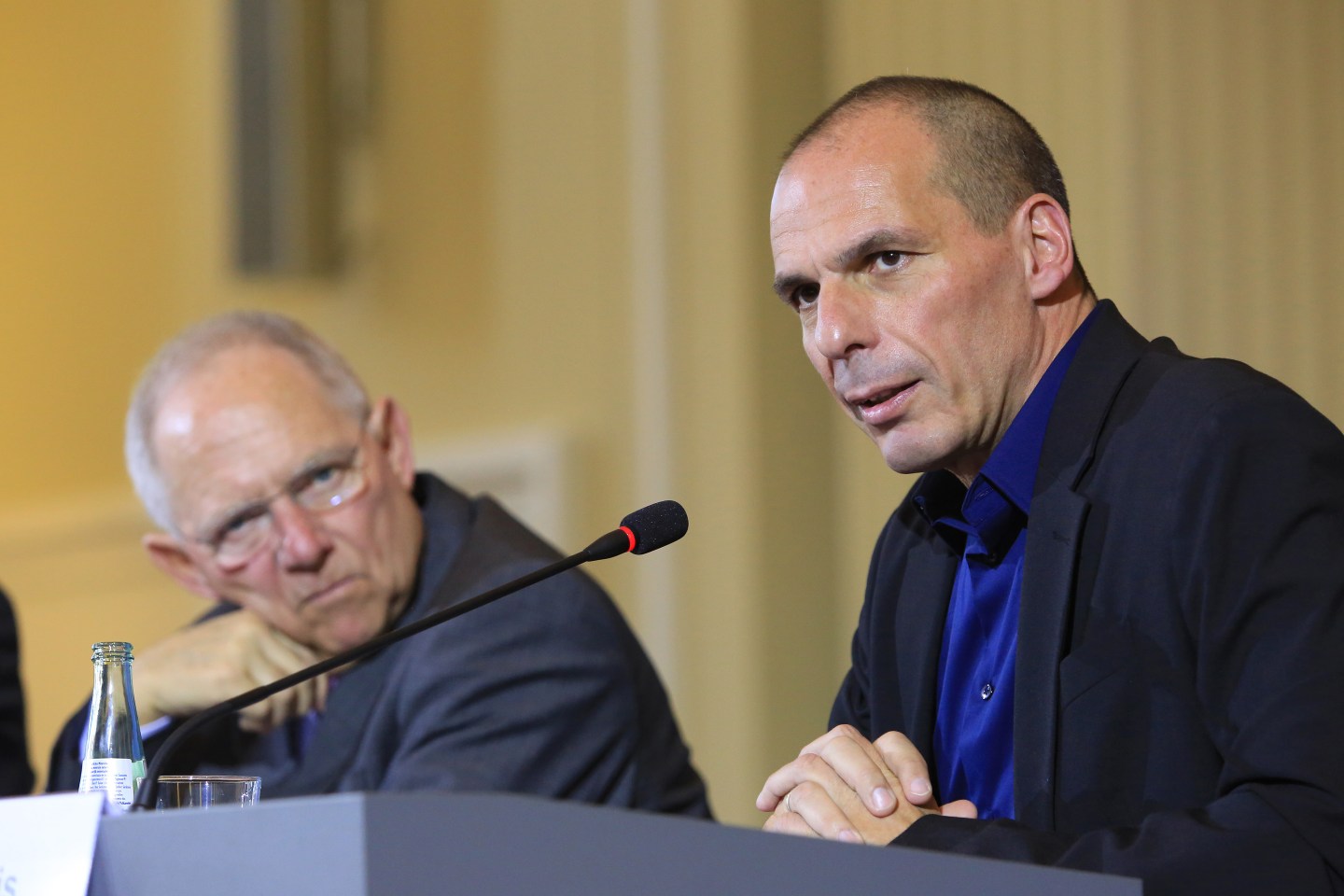 Germany is only hurting itself by dialing up the pressure on Greece. And the European Central Bank has made it more expensive for Greek banks to fund themselves, which only reinforces the notion that the eurozone is an economic mess unworthy of foreign investment.

If Germany and the “core” eurozone members want to keep the euro going, they will need to work out a more viable solution to the debt problems plaguing not just Greece but the entire eurozone periphery. While debt forgiveness may not be politically possible at this time, some sort of debt relief is needed to boost confidence in the euro. Any further delay will prolong the economic misery that has plagued the eurozone for years.

German leaders met with representatives of Greece’s new left-wing government on Friday to discuss what, if any, action should be taken in regards to the new government’s demands for debt relief. At issue is the 240 billion euros Greece received in 2010 from its eurozone partners, led by Germany, as
well as other stakeholders, such as the IMF. The money was used to pay off Greece’s huge cache of sovereign bonds, much of which was held by investors; namely, other European banks.

Unfortunately, the talks didn’t go very well on Friday. Yanis Varoufakis, Greece’s new finance minister, urged Germany to help end what he says is the “gross indignity” of the Greek debt crisis. His plea was left largely unanswered. The two sides will continue to discuss the situation in the coming week.

But the debt issue is just one economic problem facing the new Greek government. A bank run, perpetuated by the uncertainty surrounding the election, was made worse this week after the ECB voted to stop making cheap loans to struggling Greek banks. The credit line, which was part of the 2010 bailout plan,
allowed Greek banks to use junk sovereign debt as collateral with the ECB to borrow cash at a low interest rate of 0.05%. Now, the Greek banks need to borrow from the Bank of Greece, which, through its own credit line with the ECB, can make the loans at a rate of around 1.55%, or around 31 times higher than the original rate.

So, why did the ECB go ahead with this plan at a time when Greek banks are facing a run on their deposits? The ECB, most likely, wanted to send a message to the new Greek government that they have the upper hand in the negotiations and that the Greeks would be wise to quickly to accept any terms that they are offered.

The new Greek government was voted into power on a platform of change. That included making changes to the terms of the 2010 bailout agreement. Since being sworn in last weekend, Greece’s new leaders have been flying around Europe trying to gain support for their agenda, which is to ultimately reduce the nation’s debt burden so that the country could one day achieve some modicum of economic growth.

The ECB may be led by an Italian and run by a multi-ethnic board of governors, but Germany really pulls the strings in Frankfurt. Conservative Germans are appalled by the Greek government’s desire to change the terms of the bailout, and they want the Greeks to “live up” to their commitments. They believe that if they “give in” to Greek demands, then other eurozone nations on the periphery, such as Portugal and Ireland, will try to renegotiate the terms of their bailouts as well, creating some sort of bailout moral hazard in which the German taxpayer will end up footing the bill. So, they have adopted a “hard-line” stance to the Greek question and have nudged the ECB to send a warning shot.

The trouble with Germany’s logic is that it is predicated on the notion that Greece voluntarily accepted the bailout agreement. Instead, the Greeks were pretty much forced to sign on. If they had refused, the euro could have come tumbling down. That was thought to be a far worse outcome for Greece than agreeing to the terms of the bailout.

To be sure, not all the bailout provisions were bad; indeed, many were quite reasonable, such as those forcing Greece to reform its crushingly expensive bureaucracy, as well as those calling for tax reform and the privatization of state-controlled companies. But the repayment terms in the bailout left Greece with an unimaginable amount of debt, even after a 100 billion euro haircut. Greece’s economy, even if it grew like gangbusters, could never be large enough to adequately fund the state and service the debt at the same time.

The Greeks knew at the time that the numbers didn’t add up, but they went ahead with it anyway for the sake of the euro. But it wasn’t just the Greeks who knew, so did the Germans, as well as everyone who could add, including the IMF and the ECB.

You could consider the 2010 Greek bailout as nothing more than a stopgap measure put in place to calm the markets and restore confidence. It was understood that one day it would need to be renegotiated. That day has arrived.

Just consider a few facts about Greece’s economic situation. The Greek economy has shrunk 25% since the start of the eurozone crisis and currently has an unemployment rate of 25%. The Greeks have cut government spending to the bone, and yet the nation’s debt-to-GDP ratio has actually increased by 35% in the last five years and currently tops 175%.

It is time for Germany, the ECB, the IMF, and Greece to sit down and draft a workable solution to the debt dilemma once and for all. That includes solutions for Ireland and Portugal as well, as their debt-to-GDP ratios, both around 120%, remain largely unchanged from where they were when they were first bailed out.

The euro has lost 15% of its value in the last few months, due in part to the unanswered questions over sovereign debt. Any more uncertainty will continue to eat away at the euro’s value, which could end up devastating investors and savers, especially those in Germany, as they tend to sock their cash away in low-interest bearing investments.

What’s the solution? The Greek government has dropped their calls for debt relief and are instead advocated for tying their debt payments to GDP. The nation is proposing to swap the European rescue loans they received in their bailout with “GDP-linked bonds” where repayment is connected to how well Greece’s economy performs. If it does well, Greece will pay more; if it does poorly, it will pay less. It will probably fall to the ECB to fill in the gaps if and when Greece ends up paying less than required.

The only way this scheme could work is if the GDP trigger is set high enough such that Greece would pay little to nothing in the first few years of the deal, if ever. But this doesn’t mean Greece can return to its freewheeling debt days. The country will still have to live within its means, as all that debt would stay on their books, which should prevent it from being able to borrow excessively. Greece had a budget surplus last year, so it doesn’t need lots of debt to fuel a decent recovery. A few medium-size bond offerings may be all that is needed to stimulate the economy.

Germany has been hesitant to accept Greece’s plan, but they haven’t outright said no to it, either. That means there may be some room for optimism here. Let’s just hope the Greek banks are able to hold on long enough.