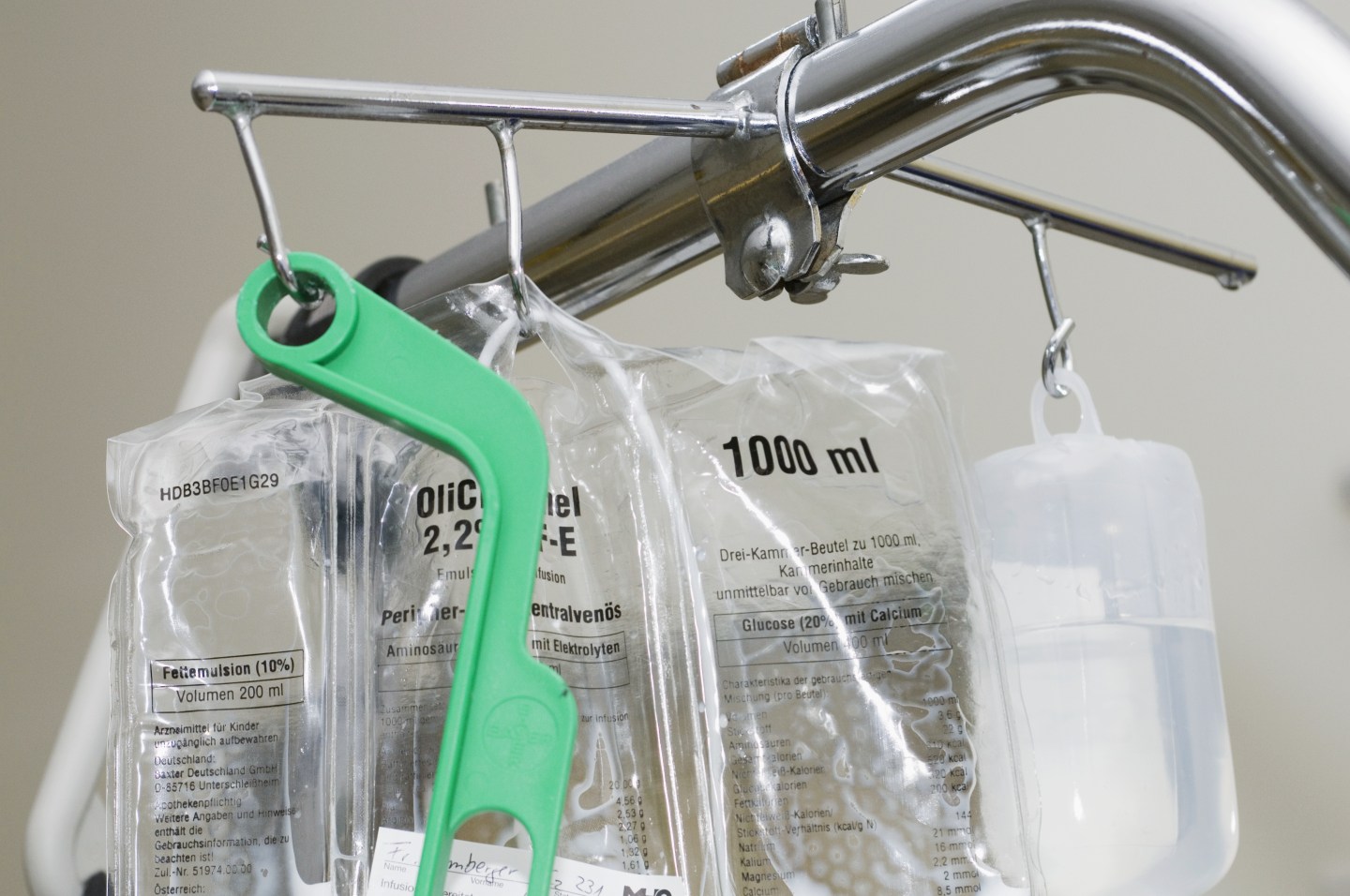 There are few drugs as useful and as widely used in healthcare as normal saline. The clear, restorative intravenous fluid is used to rehydrate patients with flu, and food poisoning, and Ebola, and countless dozens of other conditions. It’s used in dialysis and surgery, to clean wounds, and to inject patients with medication from antibiotics to chemotherapy. According to Baxter, one of the country’s leading producers of the solution, 740 units of normal saline and other sterile solutions are used each minute across the U.S. Baxter ships more than a million units per day.

Normal saline is also a medical treatment of beautiful and inexpensive simplicity. It’s sodium chloride. That’s salt water for you folks who slept through sixth grade chemistry. Bags of the fluid cost about a buck, says Erin Fox, Director of the University of Utah’s Drug Information Service.

Given its basic composition and the steady demand, you may assume that America—poised as it is to embark on an era of “precision medicine”—would have a robust and ready supply of normal saline (and let us repeat: that’s salt water). In fact, the fluid has been on the Food and Drug Administration’s drug shortage list since late 2013. The agency has worked to shore up supply since then by importing saline solution from Norway, Spain and Germany.

For the time being, The American Society of Health-System Pharmacists which issued guidance in March 2014, advises clinicians, among other things, to conserve IV solution by “using oral hydration whenever possible” and to “consider flushing central venous access devices 1-3 times per week rather than daily.” Nurses and physicians talk about having to improvise with what they’ve got—smaller bags, or alternative fluids. Pharmacists talk about bartering medical supplies among one another, and spending an unprecedented number of hours tracking down supply and scrambling together substitutes. The Veterans Health Administration, the largest healthcare system in the country, told Fortune it considers the normal saline shortage a “serious concern” that has led it to implement operational changes in order to manage care with a limited supply.

What’s going on here? America actually has many drug shortages. The issue has been a growing concern for healthcare providers since 2006—the FDA’s list of drugs in short supply is now 74 medications long; the Drug Information Service puts the number at around 300. The majority of them, like IV fluid—which was first sold commercially back in 1931 (back when Herbert Hoover was in the White House)—are common generic drugs that have been used for decades. Epinephrine, for example, also makes the list.

It’s hard to pin down exactly why this is the case, but the shortage of normal saline—and of its close, cheap kin dextrose solution (essentially sugar water)—can be especially hard to wrap one’s head around. Explanations vary.

Valerie Jensen, Associate Director of the FDA’s Drug Shortages program, says the nation’s lack of saline solution has a different cause than most. While manufacturing issues can be blamed for most medicine supply problems, Jensen says that with normal saline, there’s simply been an increase in demand. Need for the fluid reportedly spiked during the 2013–2014 flu season, and hasn’t let up since.

Adding to the problem, there have also been periodic, small-scale recalls of saline solution. Last week, for example, Hospira issued a recall after finding a human hair in an IV bag.

You might think manufacturers, then, could just make more of the stuff. But it’s not nearly so simple. The country’s three normal saline manufacturers—Baxter, Hospira and the much smaller B. Braun—are already operating 24/7, says Jensen. “They’re producing and shipping as much as they can possibly produce.”

To cope with the situation, Deborah Spak, the Global Communications at Baxter, says the company has, among other things, implemented an allocation program to help distribute the limited supply according to clinical need. Baxter, which is the VA’s contract supplier, currently delivers only 85% of the amount of product the health system has historically used, says Genevieve Billia, of the VA. The company primarily supplies hospitals through contracts with Group Purchasing Organizations (GPOs) and monitors customer purchasing data to protect against hoarding or other diversions of IV fluid.

So why don’t saline makers just add capacity? The FDA has also been working with the country’s three manufacturers to do this, but as straightforward as it would seem, it’s not so easy to ramp up production of salt water. Jensen, of the FDA, says it’s “complicated” because of the need to ensure the solution is sterile. Baxter notes the manufacturing process is “complex and time-intensive,” and consists of 29 steps—conducted over 10 days—to produce each batch of sterile solution. There are also 350 regulatory checks along the way.

Even so, Baxter has invested in additional manufacturing capacity; it will come online later this year, though Deborah Spak, the company’s Global Communications Director says “it is difficult to estimate how much it will benefit supply.”

Cathy Denning, a senior vice president of sourcing at Novation, a Texas-based GPO—a contracting organization that operates as a middleman between drug wholesalers and healthcare providers—says it’s the demands of the production process, not from the market, that have actually led to the saline shortage. She says the problem began two or so years ago, when the FDA increased scrutiny of IV fluid manufacturers. Particulate matter was found in products, which she says “threw us into this rolling back order situation.”

Some, however, suspect a more fundamental economic problem when it comes to the Great Saline Shortage of 2013–2015. Robert Campbell, president of the Pennsylvania Society of Anesthesiologists and Chairman of Physicians Against Drug Shortages (PADS), concludes—and has previously argued on Fortune.com—that the scarcity of saline solution (and other drugs) is due to the simple fact that there is no free market for saline. The five biggest GPOs have outsize control over the drug supply. Campbell contends that these organizations, which collect fees from vendors and manufacturers, have trimmed the already thin margins of generic drug makers, eroding their ability to invest, and in some cases, continue production. In 2014, the Government Accountability Office identified this as an underlying cause of the drug shortages as well. Novation’s Denning dismisses such talk and says the reality is far more complicated. GPOs like Novation, she says, have worked on behalf of hospitals for 30 years to help them “access the products they need to treat patients in a manner that helps lower overall health care cost.”

For now, healthcare providers are left scratching their heads and making do with the supply of saline they have. The shortage “is an odd one,” says Cindy Mitman, Assistant Director of Pharmacy Operations at Lehigh Valley Health Network in Pennsylvania.

Interestingly, amid this scarcity, there’s a small, but burgeoning business in providing IV therapy for people suffering from a, perhaps, less deadly ailment: hangovers. Companies like the Las Vegas-based Hangover Heaven and New York-based Hangover Club make house calls, or provide services from mobile units—usually a bus. Customers suffering from a long night out are hooked up to IV drips that contain saline solution and often a vitamin cocktail. (Some of those cocktails make the drug shortage list, too.)

The I.V. Doc, which opened a little over a year ago in New York City, has 200 employees and expanded to the Hamptons, Chicago, LA, and San Francisco (they provided service to Sundance-goers in Park City, Utah, last week as well). Adam Nadelson, the company’s CEO and Chief Medical Officer, says while its early customers often sought drinking-related relief, he now gets calls, just as often, from people with the flu, who would rather be treated at home than at the hospital. He emphasizes the company has nothing do to with saline solution shortage.

Hangover Club founder Asa Kitfield says the saline shortfall has made business a little tougher in terms of finding the sterile salt water, but not impossible. “There’s definitely excess supply. You just have to pay extra for it.”