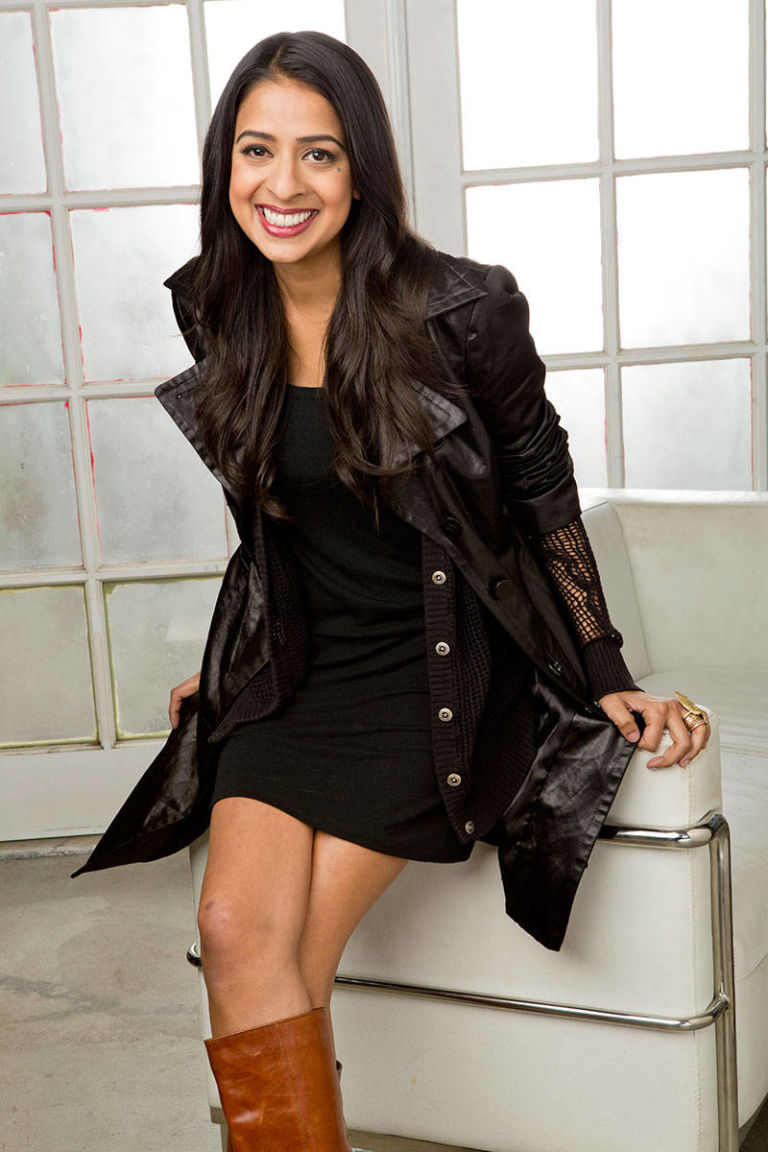 About 30 minutes into our stroll through the Alameda Point Antique Faire—the fancy name for the monthly, gargantuan flea market that puts this former Naval Base on the map for many Northern California lovers of vintage everything—Deepa Sood tells me I’ve become her flea market talisman.

In relatively short order, she has found a wide silver mesh bracelet and the mechanical innards of a hand-cranked, 19th century Thorens gramophone.

“It’s kind of exactly what I was looking for,” she says about the bracelet, which she’ll use to inspire her next line of sensor-enabled jewelry. Sood launched her startup, Cuff, in 2013 after observing her husband and his friends geeking out over a fitness-tracking bracelet he’d recently acquired. “The first thing I did when I tried it on was hide it behind my jewelry,” she says. An idea was born.

Cuff puts a feminine spin on wearable technology—a single sensor, which contains an accelerometer to track activity and is paired wirelessly with the user’s smartphone using Bluetooth—that fits into a range of bracelets and pendants, allowing the wearer to change her look day to day. The sensor also powers some handy applications, such as alerting the wearer when she receives a call or text from an important contact, thereby helping her kick the constant-phone-checking habit. It also has a safety alert function, which, through a push of a bottom, sends a call-for-help text and her GPS coordinates to selected friends or family.

We’ve come to the flea market because it’s where Sood’s path to Cuff began a decade ago. A longtime tinkerer, she liked to repurpose her vintage finds into furniture—”Anything can be turned into a table!” she exclaims—and sell them in a friend’s eclectic home furnishing shop. (Her day job, by the by, was lawyering at the San Francisco firm Latham & Watkins.) One fateful day, Gary Freidman, the CEO of Restoration Hardware, wandered in and spotted one of Sood’s creations. He hounded her until she agreed to join the home furnishing retailer, where she served as vice president of product development. When she decided to leave RH and launch Cuff, her experience “presenting stuff in a way that people find appealing” came in quite handy, she says.

As we walk through the expansive open-air bazaar, Sood deftly divvies her attention between our shop-talk and the stalls. Outfitted in a sleek faux fur vest, black sweater, black slacks, and brown wedge boots—and, of course, a healthy dose of rings and bracelets—Sood hardly looks the part of a flea market rat, but she knows what to look for and how to negotiate. She is stymied only once, when a vendor refuses to go lower than $5 a piece for three large key-rings laden with rusting skeleton keys. We move on.

Sood started out tweaking the concept of jewelry and its purpose but ended up, almost accidentally, running a technology platform. While she certainly does not shy away from technology—she made the first Cuff prototypes using a 3D printer in her garage, with her kids—she finds Silicon Valley’s embrace of technology for its own sake off-putting. “Technology and fashion make strange bedfellows,” she says.

But that amalgam has not only led to strong demand for Cuff products (they’ll start shipping early this year) but it has thrust the young company into product co-development talks with a range of major accessory brands, including Kate Spade and Montblanc. At this year’s Consumer Electronics Show in Las Vegas, Richline Brands, a maker of branded jewelry sold in department stores nationwide, announced an exclusive distribution deal with Cuff.

As we saddle up to a table with a hodgepodge of old musical devices and the vendors shows how to wind up the spring that powers the Thorens, Soods’ eyes light up. The turntable will serve as a merchandising platform in the new product shots. Later, she and I talk about how the seller, after explaining in detail how the mechanism works, balks at our talk about modern digital devices. “Nothing I’m doing now would be possible” without early strides in analog technology, she says.

It’s not just the contrast of old and new that draws out Sood’s creativity. “I’m into juxtapositions. I love clean lines, but I also love some things that are incredibly embellished,” she says.

We’re both fiends for a flea market, but as we try to extract ourselves from aisles of vintage ephemera, we have to cop to the downside of the collecting compulsion. “I have more chairs in my garage,” Sood deadpans, “than I have friends.”