The new Greek crisis: here’s what you missed while watching the Superbowl 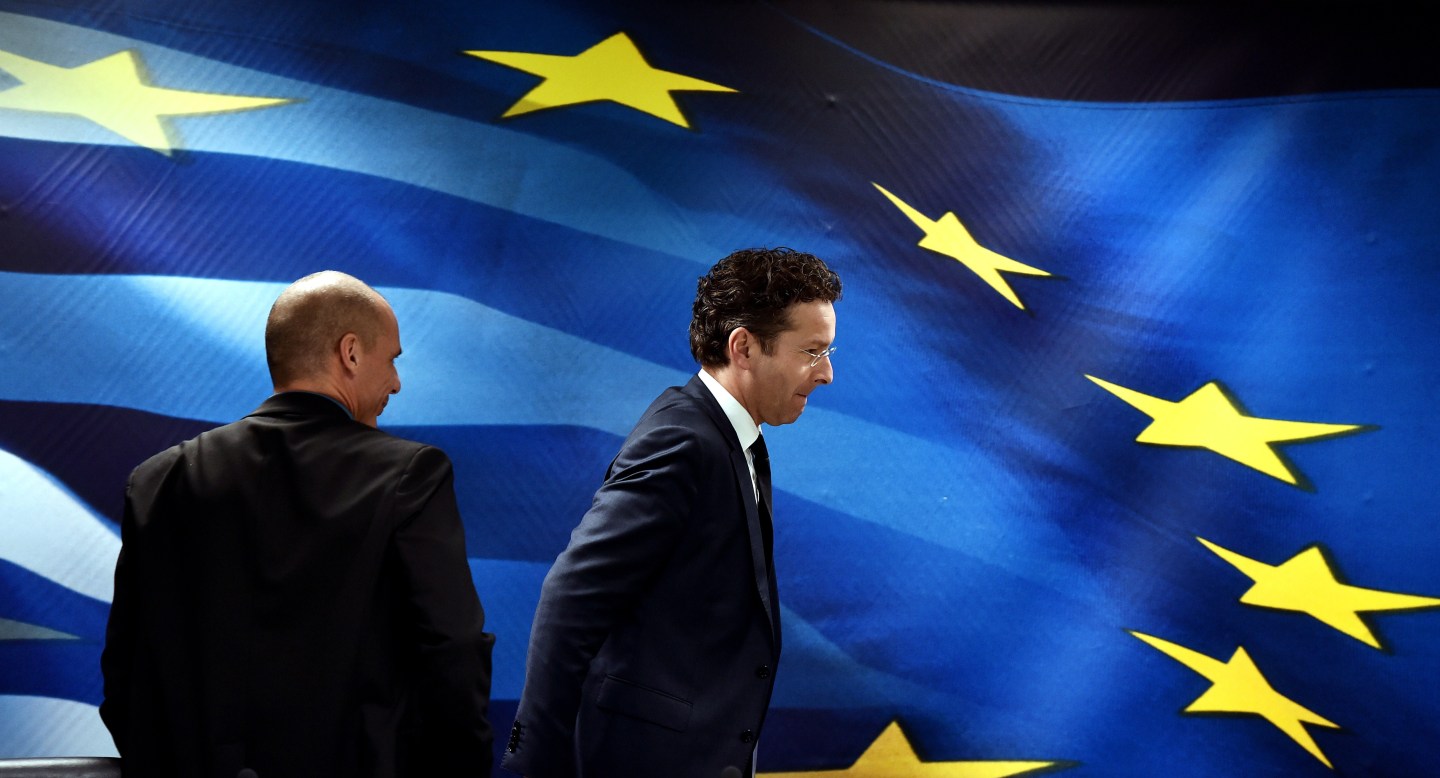 Week two of the Eurozone’s new Greek drama has opened with the country’s openly atheistic Prime Minister meeting his second Archbishop in a week, its Finance Minister in (non-Eurozone) London in an effort to find friends to support the government’s anti-austerity stance, and a sulky silence from Berlin reminiscent of a weary parent waiting for a two year-old’s tantrum to subside before starting disciplinary action.

Here’s a round-up of the weekend’s action and some key pointers for the week ahead.

1. Finance Minister Yanis Varoufakis told a press conference in France that the country would rather go cold turkey than accept any more loans from the detested “Troika” that oversees its bailout program (that’s the European Commission, the European Central Bank and the International Monetary Fund). The Eurozone and IMF held back the last €7 billion payment in December saying that Greece still hadn’t fulfilled all the conditions for aid. At the moment, the government is just about covering its day-to-day expenses, but analysts say that won’t last long if a new crisis of confidence tips the country back into recession.

2. Varoufakis started a whistle-stop tour of European capitals in an attempt to rally support. He started in France, whose President Francois Hollande made the most supportive comments for Syriza’s program of any European leader following their election win. However, even in Paris, Varoufakis found no support for Syriza’s key demand for a writedown of some of Greece’s debts. His French counterpart Michel Sapin told him that while they can be extended, the debts can’t be written off.

3. Being told that the debt’s can’t be written off hasn’t stopped the Greek government from hiring investment bank Lazard to advise it on restructuring them. The last time Athens hired Lazard was in 2012, just before the second Greek bail-out agreement. Prime Minister Alexis Tsipras continues to insist that they won’t take any “unilateral actions” like defaulting.

4. The ECB dropped its clearest hint yet that it won’t cut the Greek banking system any more slack if the government doesn’t renew the bail-out program at the end of February, when it’s due to expire. At the moment, the banks can borrow from the against Greek government collateral because the country is deemed to be making efforts to keep itself creditworthy in the long term. If the government rips up the program, as it seems to want to do, then that special deal is over, ECB vice-president Vitor Manual Constancio said at the weekend. When the ATMs run out of the ECB’s euros, Greece is going to need another currency that it can use.

5. U.S. President Barack Obama weighed in from the sidelines, in a sign that Washington’s patience with German-led fiscal rigor is pretty much exhausted. “You cannot keep squeezing countries that are in the midst of depression,” Obama told CNN. “At some point there has to be a growth strategy…The best way to reduce deficits is to grow.”

6. But what of Germany? Reportedly, Varoufakis isn’t including Berlin on his current tour, and it looks unlikely there will be any face-to-face contact before a summit meeting in Riga, Latvia, next week. Chancellor Angela Merkel said in a newspaper interview Saturday that “I do not envisage fresh debt cancellation. There has already been voluntary debt forgiveness by private creditors and banks have cut billions off what Greece owes them.”

6. So the game of chicken continues, and financial markets look like they’re getting used to the new situation. The Athens Stock Market has bounced 4.6% this morning after falling 14% last week, while the yields on Greece’s government bonds are steady. It’s an uneasy peace though.