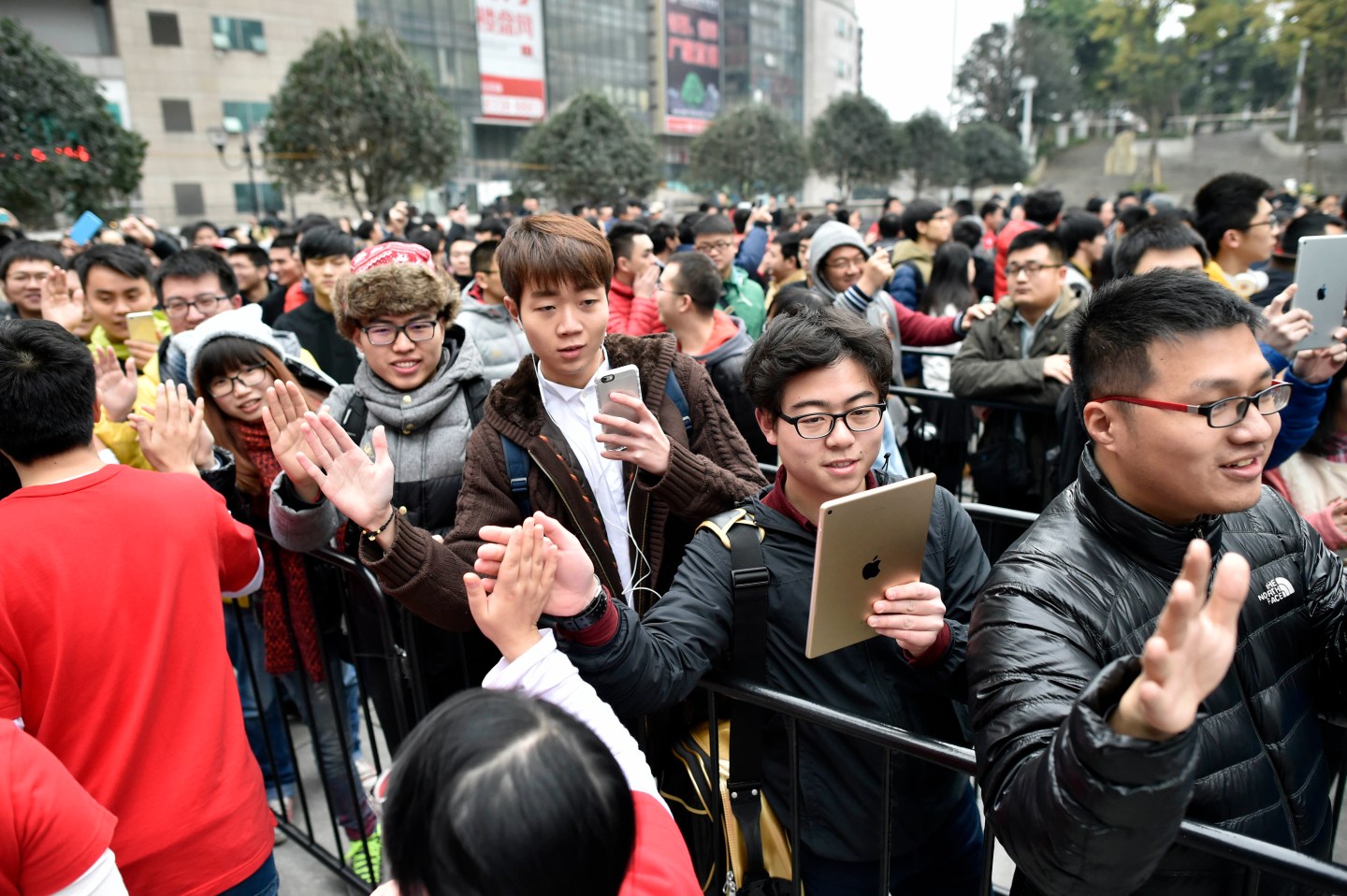 CHONGQING, CHINA - JANUARY 31: Apple Store employees greet customers during the grand opening of an Apple Store in Jiefangbei, Yuzhong District on January 31, 2015 in Chongqing, Sichuan province of China. The Jiefangbei store is the fifth Apple Store in China. Apple CEO Tim Cook announced in October that the company plans to open 25 more stores in China over the next two years. (Photo by ChinaFotoPress/Getty Images)
Photograph by ChinaFotoPress/Getty Images

China’s manufacturing sector started the new year in the same downbeat way that it ended the old one, according to a new report out Monday.

The monthly Purchasing Managers’ Index compiled by HSBC and research firm Markit signalled another month of contraction, marked by a 15th straight month of job-shedding and more evidence of deflation as the country feels the effects of past over-investment.

The PMI edged up to 49.7 from 49.6 in December, still below the 50 level that normally signifies expansion. That was because output managed to eke out its first small increase in three months. New orders and exports also just managed to stay in positive territory.

It’s the manufacturing sector that has borne the brunt of the slowdown in China over the last year, a result of the authorities’ efforts to divert more activity to consumption, and to clamp down on local governments trying to juice growth by debt-fueled property development.

That shift in emphasis is having an impact all around the world, as commodity producers from Australia to Zambia have woken up to the fact that Chinese demand for commodities is, after all, finite. Prices for commodities such as oil and iron ore have collapsed in the last 12 months, prolonging and deepening a deflationary cycle that started three years ago. Average input prices to Chinese factories fell at their fastest rate since 2009, according to Markit. Official Chinese data suggest profits at the country’s oil and fuel sector fell 79% last year, while those in the coal sector fell 46%.

“More aggressive monetary and fiscal easing measures will be needed to prevent another sharp slowdown in growth,” said Hongbin Qu, chief economist for Asia at HSBC.

Such calls have been falling on deaf ears for the last six months at least. In the second half of 2014, the authorities had restricted themselves to the bare minimum of measures needed to keep the banking system stable.

Beijing took in its stride the fact that China’s growth slowed to ‘only’ 7.3% in 2014, the slowest rate in 24 years. However, analysts at ANZ in Hong Kong note that policy is driven increasingly by employment concerns, and point to recent comments by Premier Ki Keqiang that the country still needs decent growth to hit its target of creating 100 million jobs a year.

ANZ expects the People’s Bank of China to cut its deposit rate and its reserve requirements on local banks within the next two months.

Elsewhere, Markit’s PMIs for Europe showed a slight slowdown in Germany and France, offset by strong gains in Spain and Italy. But in a warning to the new government in Athens, the PMI for Greece fell to its lowest level in 15 months, due to fears over the country’s future direction after the victory of the left-wing Syriza party in snap elections. The Eurozone PMI rose to 51.0 from 50.6 in December.