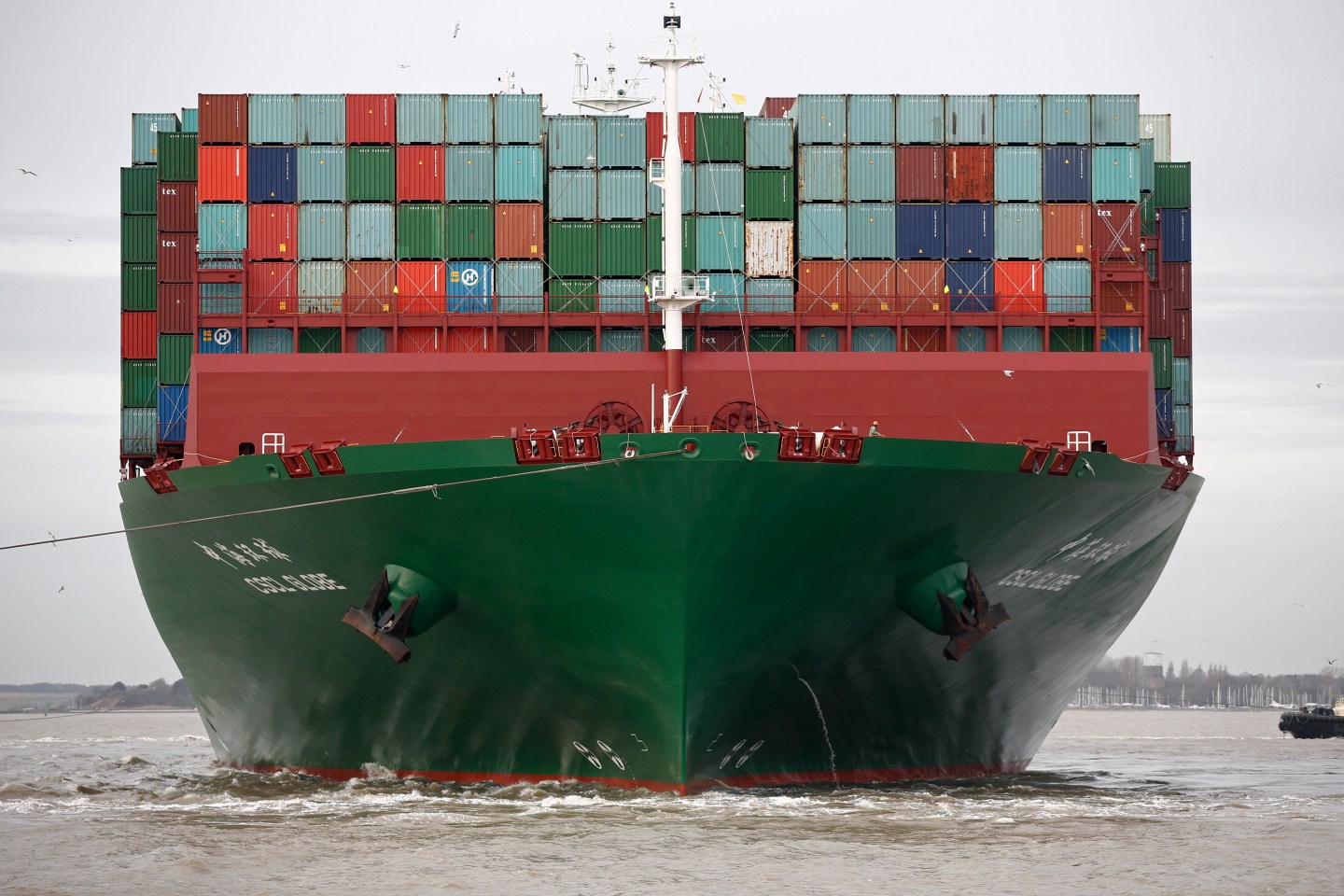 Freight containers sit on the deck of the world's largest container ship, the CSCL Globe, operated by China Shipping Container Lines Co., as it prepares to dock at the Port of Felixstowe, a subsidiary of Hutchison Whampoa Ltd., in Felixstowe, U.K., on Wednesday, Jan. 7, 2015. The inflation rate in the euro area fell below zero for the first time in more than five years, bolstering the case for more European Central Bank stimulus. Photographer: Simon Dawson/Bloomberg via Getty Images
Photograph by Simon Dawson — Bloomberg/Getty Images

On Monday, December 8, the newly-christened CSCL Globe left port in Shanghai en route to Europe on its maiden voyage. Capable of carrying 19,100 twenty-foot shipping containers—19,100 TEU, as they say in the industry—the Globe, constructed by Hyundai Heavy Industries and owned by the state-run China Shipping Company, is now the world’s largest container ship by volume. It is also among the largest ships in operation by raw size, at 400 meters long and 59 meters wide. If you cut the antenna tower off the Empire State Building, it would be 20 meters shorter than the Globe is long.

But the CSCL Globe is more than just a really, really big ship. Its massive size reflects equally massive changes that have reshaped the ocean shipping industry over the past decade as carriers build ever-bigger ships to capture economies of scale in fuel and crew costs. The capital-intensive strategy is squeezing out smaller players and triggering consolidation across an industry that has long resisted it, while putting new demands on global shipping infrastructure.

So-called megaships have come to dominate container shipping with astonishing rapidity over the past decade. The industry was bowled over in 2003 by the arrival of the then-massive OOCL Shenzhen—but its 8,063 TEU capacity is unremarkable by today’s standards.

The shift to larger ships was pushed along by the global financial crisis and rising fuel costs. After rates for container shipping hit record highs in the 1990s and early 2000s, prices collapsed along with global trade in 2008 and 2009. Orders to shipbuilders around the world were cancelled in droves.

When orders picked up again, they were almost all for megaships. Hyundai Heavy Industries, for instance, reports that since 2010 it has built 82 ships of more than 10,000 TEU but has received orders for only five ships in the 5,000 TEU range.

These capital-intensive larger ships have, predictably, concentrated in the hands of the largest carriers. “To play with the big boys now, you have to be putting a huge amount of money out,” says Sam Chambers, editorial director of the trade journal SinoShip. According to a Drewry Maritime Research report from July 2014, MSC operates 696 ships above 10,000 TEU, Maersk operates 433, and CMA CGM Group has 363.

The efficiencies of the larger ships are a boon for individual shippers, and for the global environment. They consume as little as 50% of the fuel per container moved as older ships, while also more than halving insurance and staffing costs. A megaship requires the same 20-odd crew as a smaller ship but can carry three times the cargo.

The effect on the industry as a whole is less sanguine. “In terms of supply and demand, the industry is blighted by what we describe as structural overcapacity,” says Simon Heaney, Drewry’s senior manager of supply chain research. Large carriers have mitigated that oversupply to a degree through a practice known as “slow-steaming”—intentionally operating ships at as little as half their normal speed, which both reins in capacity and offers further fuel savings.

With less access to efficiencies of scale or speed, smaller carriers are losing ground fast. Carriers outside of the global top 10 operate only dozens or, in some cases, zero megaships. Some have been forced into mergers, such as the acquisition of CSAV by Hapag-Lloyd in April. Further consolidation has taken the form of cargo-sharing agreements. By early 2015, the Asia-Europe container trade will be entirely controlled by just four major alliances.

Infrastructure limitations have kept the largest of the megaships confined to those Asia-Europe routes. Ships the size of the CSCL Globe are too large to fit through the Panama Canal, and neither East nor West Coast U.S. ports are equipped to handle them anyway. The expansion of the Panama Canal to accommodate megaships is underway, and the Hong Kong-based investment group HKND is currently exploring the construction of a large canal across Nicaragua. But the megaships are having ripple effects around the world by pushing older, smaller ships out of service on Asia-Europe routes, inflating capacity and pushing down prices everywhere.

Industry watchers say the CSCL Globe is unlikely to retain its world’s-biggest title for long. Sam Chambers of SinoShip expects to see a 20,000 TEU ship ordered by early 2015, and ships of up to 24,000 TEU would be viable with current Asia-Europe infrastructure. That would mean continued chronic overcapacity, and even more pressure on smaller shippers worldwide.