The Reincarnation of Bell Labs 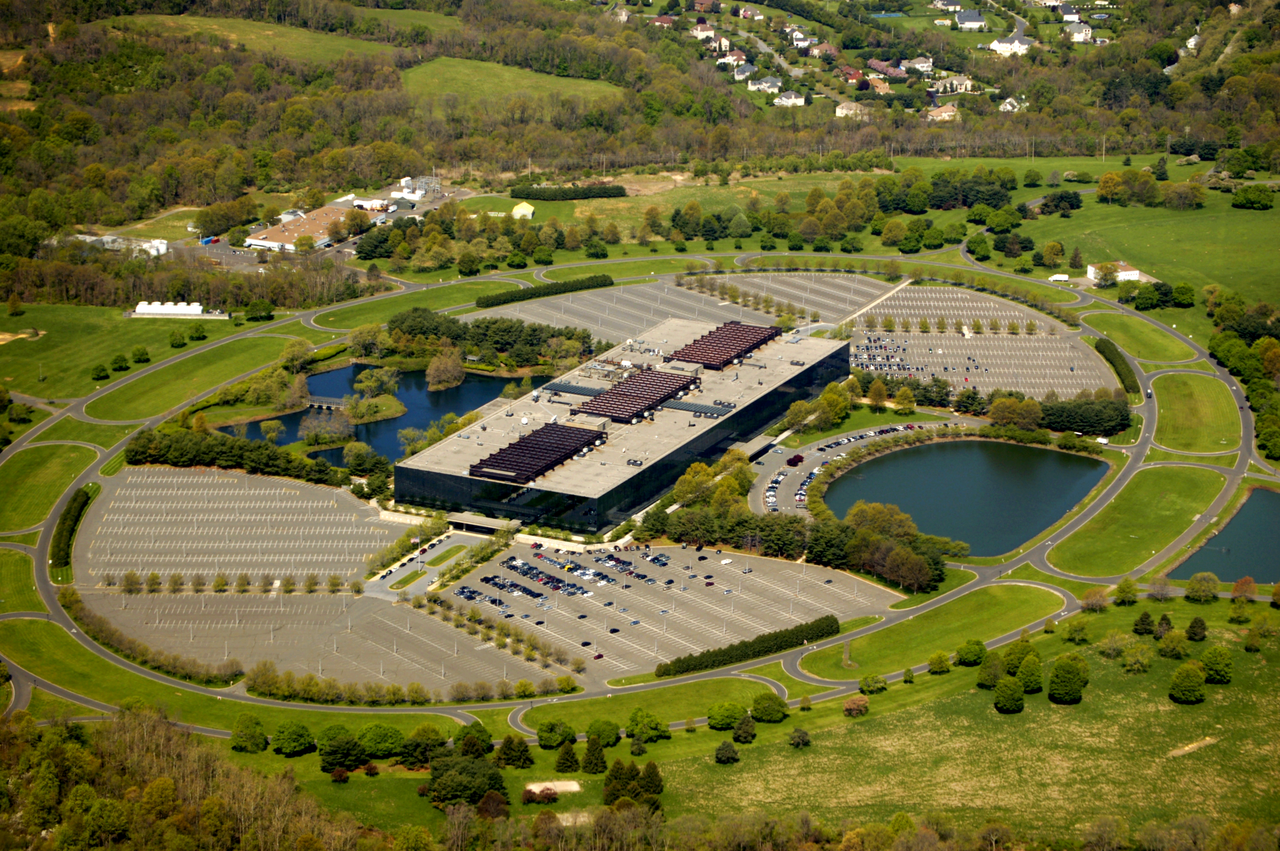 Take one look at the former Bell Labs headquarters in Holmdel, N.J., and you realize that this was a place built for people who dream big.

As you approach the building on Bell Laboratory Road, arising out of nowhere is a 60-foot sculpture of a transistor, an invention born at Bell Labs that launched a computer revolution that is still underway.

Then you see it: a 2 million square-foot behemoth of steel and glass, designed by famed Finnish-American Eero Sarineen, known best for his Gateway Arch in St. Louis. It’s a box that spans three football fields, built in 1962 in the mid-century modernist style, sleek and glistening in stark contrast to the leafy flora of suburban New Jersey.

Bell Labs was the best-funded and most successful corporate research laboratory the world has ever seen. At the Holmdel site alone, Bell researchers invented the cell phone and discovered background radiation, a critical step in the development of the Big Bang hypothesis. In its decades-long prime, beginning in the 1930s and extending until the end of the AT&T (T) monopoly, the lab produced eight Nobel Prize-winning discoveries and even helped the United States win World War II.

But the breakup of Ma Bell was the beginning of the end for Bell Labs. The organization exists today as a subsidiary of Alcatel-Lucent (ALU), but it is a shell of its former self. The Holmdel location was put on the market in 2005, a few years following the dot-com crash that sent Lucent’s stock price tumbling and destroyed whatever dreams the company had of returning Bell Labs to its glorious past.

Ralph Zucker, president of Somerset Development, soon got wind that the historic site would be put up for sale. Lucent initially held talks with Preferred Real Estate Investments, which planned to knock the building down. But when the deal crumbled amid protests from the scientific community, Somerset swooped in.

Watching that deal fall apart, Zucker saw an opportunity. “Lucent was in a bit of a conundrum,” says Zucker. There isn’t much demand for 2 million-square-foot buildings these days, in an era when companies are radically reducing the amount of work space they devote to individual employees.

Zucker wasn’t interested in turning the Bell Labs site into a museum. But he did feel he could turn a profit and still protect the building’s history. He planned to turn the structure into a town center, open 24-7, filled with restaurants, shops, and offices that would function as an “urban oasis in the middle of the suburbs, as well as a monument to American ingenuity,” Zucker says.

Zucker isn’t the only developer trying to find new uses for outdated, sprawling suburban corporate campuses. As companies downsize their office space, they have also moved closer to cities, where they can attract the best young talent.(The latest example is logging giant Weyerhauser (WY), which will vacate its 1 million-plus square foot suburban campus and set up a new headquarters in downtown Seattle). According to commercial real estate analytics firm Reis, the vacancy rate for office space in the suburbs is 18.4%, compared to 13.4% in urban areas. Northern New Jersey’s vacancy rate is even higher than the national suburban average—close to 20%. Experts call these empty office spaces “white elephants.” Figuring out what to do with them is a huge concern for both property developers and municipalities, which depend on the property taxes paid by large corporations to fund basic services.

Fifty-three-year-old Zucker speaks in rapid-fire sentences. Short, with dark eyes and hair, the Baltimore-born developer has a palpable fondness for beautiful architecture and simple, elegant design. Zucker got his start as what he calls a “typical suburban sprawl developer.” He looked for massive tracts of land where he could build large lots with big garages and backyards.

But in the 1990s, Zucker became drawn to the new-urbanist movement, a school of thought in the planning and architectural community that argues for mixed-use zoning and walkable communities rather than the car-centric suburbs that spread across the nation in the decades following World War II.

Zucker tells the story of one community he built with a small park in the center. Though each home came with an acre or half acre backyard, the park was so popular that he had to install extra benches. “Everyone just wanted to hang out in this 100-by-100 strip of space,” he recalls.

Zucker was convinced. Developers weren’t building the kind of homes people really wanted. Sure, large homes and space for automobiles are great, but most people “don’t want to spend 25% of their lives in their cars,” he argues. Zucker isn’t the first person to realize this. The Congress for New Urbanism has been around since 1993, while the first development widely thought to adopt new urbanist principles, Seaside, Florida, was constructed in 1981.

Since that time, the new urbanist movement has had many successes. Communities like those in Kentlands, Md. and NorthWest Crossing in Oregon are cropping up all over the U.S. Such dense, walkable developments are in high demand, with several studies showing that home prices in new urbanist communities weathered the housing bubble much better than the median home. Rob Steuteville, editor of the online publication Better Cities & Towns, estimates that there are nearly 600 new urbanist communities either built or under construction in the country, and that interest in these developments is only growing.

But building new urbanist projects isn’t just a matter of demand. Steuteville says that outside of the cities, developers often come up against regulations that are hostile to mixed use facilities and dense living. “It’s sometimes tough to get through those layers of bureaucracy, and developers don’t want to go through that battle because time is money,” he says.

If that weren’t enough, homeowners in many suburbs across the country are averse to radical change in their neighborhoods. The residents of Holmdel in particular weren’t about to welcome just anything into their community. Homes in the township sell, on average, for nearly $900,000 and the area has some of the best schools in the country. Homeowners want to protect both their investment as well as the amenities in their neighborhood. Patrick Impreveduto, who is a Holmdel resident and served as mayor of the township until January of 2015, says that people “were most concerned about the impact on schools” when Somerset first began to pitch ideas for Bell Labs.

No wonder Zucker’s initial plan went over so poorly with residents. His first idea, designed with legendary urbanist Jeff Speck, was to encircle the Bell Labs building with more than 700 townhouses. “We still think it was genius,” says Zucker, but the people hated the mid-century modern architectural style and the number of homes planned for the site. “This isn’t Philadelphia,” Zucker recalls one townsperson saying at a community meeting.

That first meeting, which was held in 2008, was a major setback for what is now called the “Bell Works” project. According to Impreveduto, much of Holmdel was divided on what should go on the site. Many wanted the town to attract a single tenant, like a Google, to take over the entire space. Others just wanted the building razed. What kept town officials interested in Somerset’s vision was the promise of a return of the kind of tax revenue that had once come from Lucent. “The building was 10%, almost 20%, of Holmdel’s tax base in its heyday, or roughly $4 million,” says Impreveduto. “By 2008, we were bringing in less than $400,000,” annually.

If residents didn’t want to cut back on services or see their taxes go up, they would have to get on board with some kind of development on the site. But that doesn’t mean Holmdel was about to jump into bed with Somerset. “Developers aren’t very trusted in New Jersey,” says Zucker.

It took Somerset almost another 12 months, and an assist from New Jersey Lieutenant Governor Kim Guadagno, to make it back to the negotiating table. Zucker called Guadagno up and asked for her to arrange a sit-down with the town leaders and officials from the state, who had become increasingly eager to turn the site into a jobs engine—it was now 2009 and the effects of the recession were rippling across the U.S.—while preserving the history of the building.

The meeting got the town and Somerset talking again. Holmdel allowed Somerset to set up a mock “town center” for one night in September 2009, where they decked out the Bell Labs building to give residents a feel for what the finished product would look like. They set up mock store fronts showing where the restaurants, cafe, and wine bar would be located, as well as well as a space for a public library. Nearly 2,000 people showed up that night, and the event “was a game changer,” says Zucker.

The residential component of the plan was still up in the air. Many Holmdel residents felt that the fewer homes put on the site, the better. They didn’t want the kind of sewer infrastructure that would allow residential properties to be built out of fear that it would harm the aquifer. Others were worried about the strain that an influx of new residents would put on the school system. But without houses, Zucker’s dream of a dense town center would be unrealized. It would also mean that Zucker would have to develop the site without the protective cushion of income from residential real estate in an attractive location like Holmdel.

The residential piece was a big prize for any builder, and Zucker was approached by several homebuilders to be a part of the project. Though it wasn’t the highest bidder, Zucker signed a deal with Toll Brothers (TOL) in 2013 in part because Chris Gaffney, who oversees the firm’s operations in suburban New York and New Jersey, grew up in Holmdel and was someone the town leaders felt they could trust. Through months of negotiations, the three parties agreed that they would build a total of 225 homes: 40 single-family properties and another 185 “active-adult” homes that would be open to residents aged 55 and older. All of these homes will be a short walk away from the Bell Works building.

The adult homes were a key ingredient, as they are a booming part of the real estate market—Gaffney estimates that these homes represent roughly 10% of Toll Brothers’ revenue right now—but also because these properties wouldn’t put extra strain on the school system. Toll Brothers hopes to start marketing the properties soon and signing contracts in September.

The main Bell Works building will house restaurants and shops, offices, the town library, and private offices. The first commercial tenant has yet to be announced, but Tara Keating, vice president at Garibaldi, which is handling office leasing, says that the building will be rented out in portions as small as 1,000 square feet to 250,000 square feet, and that they have received interest from technology, legal, and marketing firms. They expect the first tenant to move in this summer at the earliest.

Bell Works will be open all hours of the day for pedestrians to peruse and gather. The building will be accessible by a shuttle bus that will pick up riders from the nearby New Jersey transit commuter line 10 minutes after trains arrive.

The site might not be quite the urban oasis that Zucker originally imagined, but by the end of 2015, Holmdel will be a little less suburban.