This chart explains why stocks have more room to fall 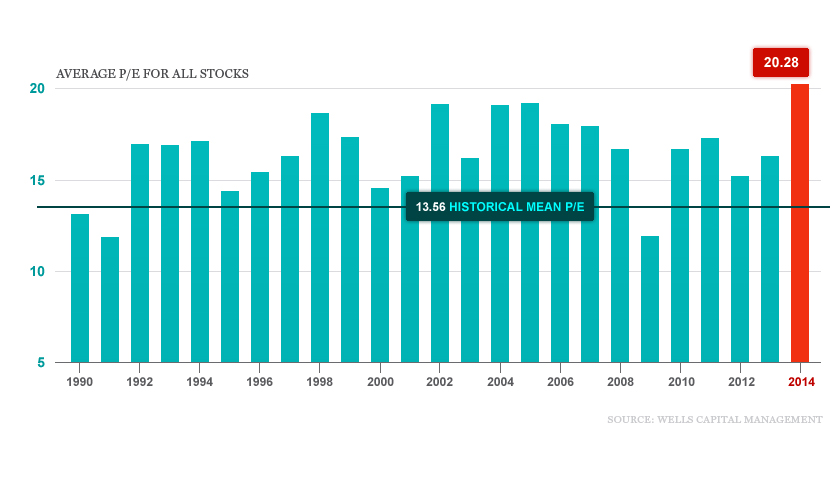 The market may be more expensive than it looks.

In the past year, a number of prominent stock observers, from Nobel Prize winner Robert Shiller to Carl Icahn, have warned that we are in a bubble. Their evidence: the price-earnings ratio of the S&P 500, which is a measure of how expensive stocks are, is higher than average. It currently has a so-called forward multiple, which compares the index’s price to what the companies will earn in the next year, of 16.6. That’s higher than it has been at any point in the past 10 years, including the past market peak in 2008, according to market data firm FactSet.

But the valuation of the S&P 500 is still far lower than it has ever been, when the same ratio was 26 in the early 2000s. So we may still be in the clear.

The problem is the S&P 500 might be making the market appear cheaper than it is. The S&P 500 is a market cap-weighted index, so it overweights big stocks versus small stocks, and it is only looking at the shares of 500 of the thousands of stocks that trade.

Wells Capital’s James Paulsen took a look at the non-weighted mean price-to-earnings (p/e) ratio of all the stocks in the market, not just the S&P 500. Based on that, the p/e of the market is just over 20, which is the most expensive it has been since at least 1951 and probably ever, higher than it was in 2000 or 2008, the last two times the market crashed.

Does this mean the stock market will crash? Paulsen doesn’t think so. He says we just need corporate earnings to catch up. And with a better economy, that may be happening. Paulsen also notes that the gap between the two ratios may simply mean that the S&P 500, meaning big stocks, are cheap right now. So maybe its a good time to buy stocks, or at least into an S&P index fund.

So Paulsen says he’s not bearish on the market right now. “Of course, if the market were to fall a lot from here, we’ll look back at this chart and say we probably should have known,” he says.