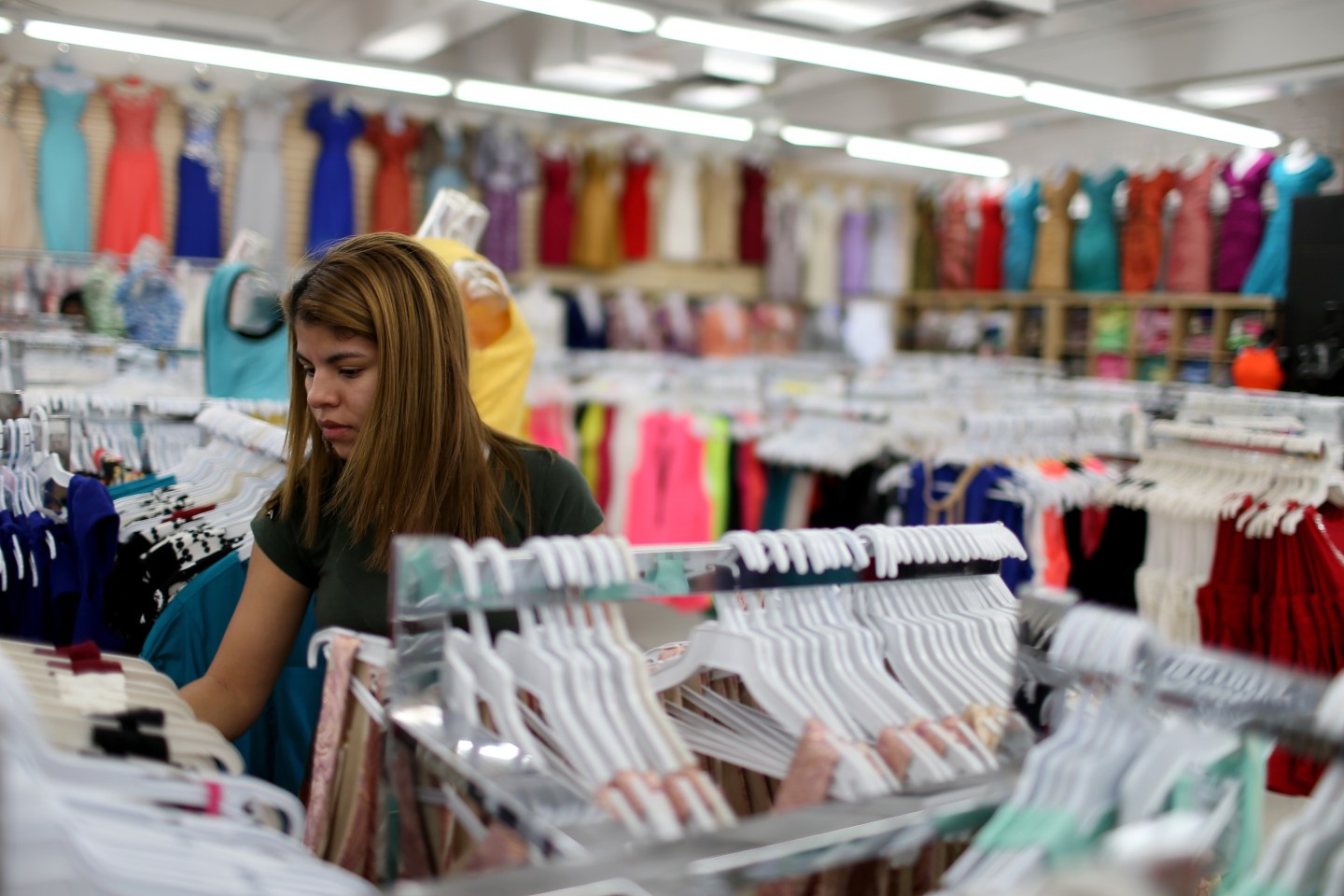 MIAMI, FL - DECEMBER 23: Deymi Torrez shops in the Victoria Fashion store as reports indicate that the 3rd quarter GDP was 5.0%, revised up from last month's estimate of 3.9% and a large part of that was due to consumer spending on December 23, 2014 in Miami, Florida. The GDP growth is the most since the 3rd quarter of 2003. (Photo by Joe Raedle/Getty Images)
Photograph by Joe Raedle — Getty Images

The Commerce Department’s advance estimate of GDP growth in the fourth quarter of 2014, released Friday morning, shows the economy grew at a 2.6% pace in the October-to-December period, a steep fall from third quarter growth of 5%, and below economists expectations of 3%.

The Labor Department also released the Employment Cost Index Friday morning, a measure of total worker compensation. It showed that worker pay grew a seasonally-adjusted 0.6% in the fourth quarter of 2014, and that compensation grew 2.2% during all of 2014. That’s a small increase over 2013’s 2% growth, but still only just enough to stay ahead of inflation. These reports give little indication that the trend of stagnant wage growth is reversing, even as the unemployment rate drops and the labor market gets ever closer to what the Federal Reserve now estimates is “full employment.”

The Fed will be watching both of these reports closely. This week, the central bank announced that it was committed to keeping interest rates at near-zero for now, but many analysts suspect that it will look to start raising rates again this summer. However, these numbers, plus economic turmoil abroad, might give the central bank pause. With no evidence of wage growth, some Fed governors are likely to question whether its estimate that the long-run rate of full employment will sit at somewhere between 5.2% and 5.5%. Since the unemployment rate is now at 5.6%, that would mean the economy has just about reached its potential, and any further job gains would begin causing inflation.

But today’s numbers, which show a growing but not overheating economy and wage growth more or less in line with what we’ve seen in recent months, might call the Fed’s estimates into question. Many economists argue that given the unique nature of today’s economy, namely that a large chunk of the population is increasingly of retirement age, the natural rate of unemployment will actually be much lower than we’ve seen over the past two generations. As Jared Bernstein, former Chief Economist for Vice President Biden writes:

So, you want to know why wages aren’t rising yet? It’s because there’s still too much slack in the job market. Yes, there are more jobs, but there are still either too many workers chasing them or waiting in the wings to do so that employers don’t have to bid wages up to get the workforce they need.

The takeaway, then, from today’s numbers is twofold: First, while the U.S. economy is still getting healthier, it has probably not yet reached the sort of escape velocity that would require the Federal Reserve to quickly remove its stimulus. Second, economists at the Fed are paying close attention, and the chances that a rate hike is coming in June just got a little smaller.