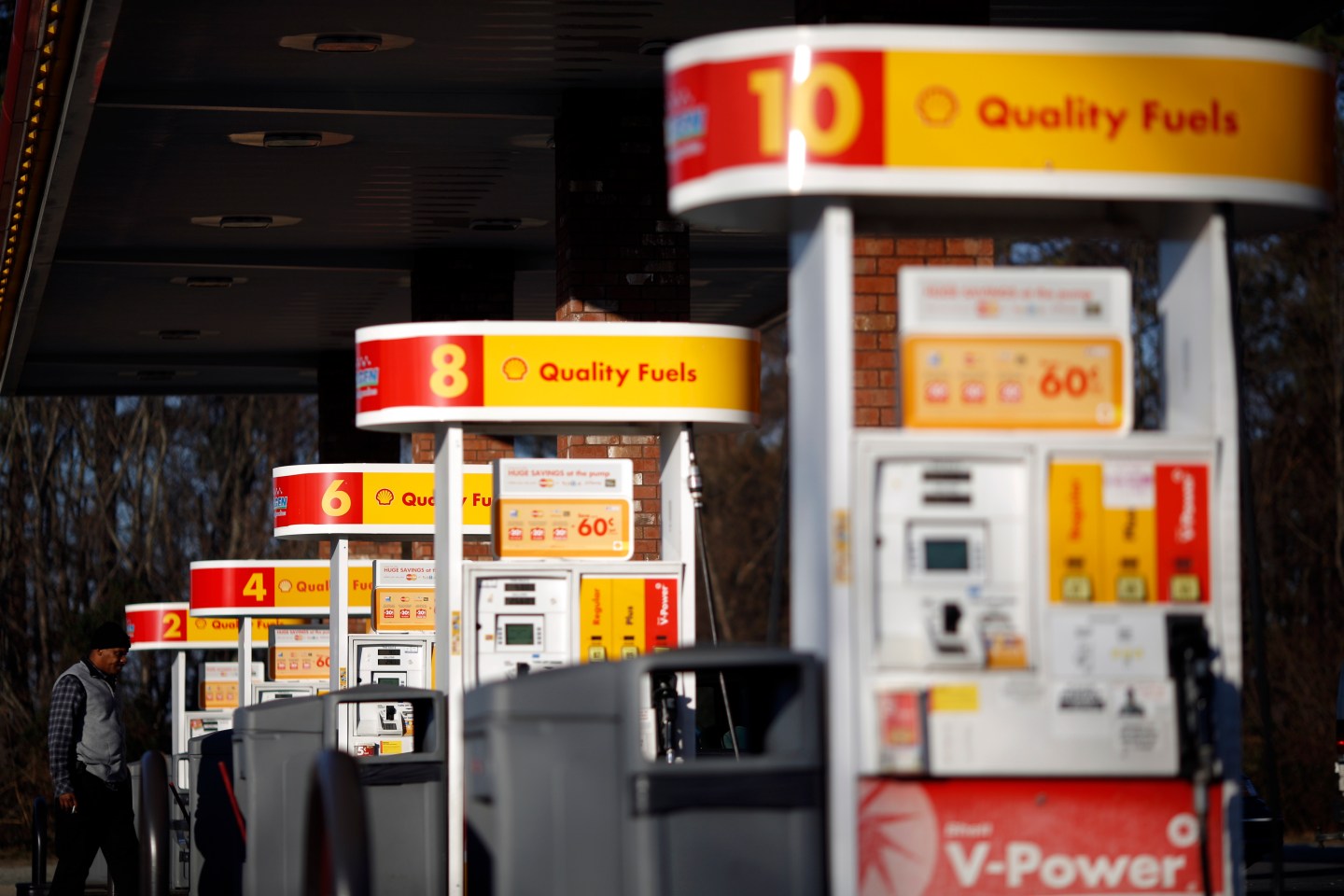 A motorist waits for his car to fill up with gasoline at a Royal Dutch Shell Plc gas station in Portland, Tennessee, U.S., on Friday, Jan. 16, 2015. Trips to the pump that are costing less and less and job gains that have accelerated are helping Americans feel more optimistic about the economic recovery, now in its sixth year. Photographer: Luke Sharrett/Bloomberg via Getty Images
Photograph by Luke Sharrett — Bloomberg via Getty Images

Another day, another swing of the axe in the oil industry.

Anglo-Dutch major Royal Dutch Shell Plc (RDSA) said Thursday it will slash spending by $15 billion over the next three years, in an effort to adjust to a new world of lower oil prices.

The 43% drop in crude in the final quarter of last year meant that Shell’s profits for the period fell 45% from the previous three months to $3.26 billion on a current-cost-of-supplies basis. That missed consensus forecasts by nearly 20%. Net profit fell 83% from the third quarter to $773 million.

Reuters reported chief financial officer Simon Henry as saying that profits were also dented by write-offs on exploration in North America, and by foreign exchange losses (notably in Australia).

Shell’s announcement follows similar grim news from its biggest U.K. rival BP Plc (BP), which has frozen pay worldwide and which said Wednesday it would sell down its stake in two big fields in the Gulf of Mexico, including the Tiber field where the Deepwater Horizon disaster took place in 2010.

However, Shell’s capex cuts were smaller than analysts had expected. At $5 billion a year, they’re ‘only’ 14% of last year’s total capex of $35 billion.

The company struck a cautiously optimistic tone suggesting it sees a recovery as possible before too long. While it said it was “considering further reductions to capital spending” if market conditions demanded it, Shell said it’s “not over-reacting to current low oil prices and keeping (its) best opportunities on the table.”

Those “best opportunities” may include an $11 billion petrochemicals plant in the Iraqi port of Basra, according to an Iraqi government statement Wednesday. That announcement comes only two weeks after the company abandoned a “commercially unfeasible” plan for a plant in Qatar.

Shell had already embarked on a major slimming-down program before the prices collapsed, selling $15 billion of non-core assets in 2014.

CEO Ben van Beurden acknowledged that lower oil prices and divestments would probably mean that Shell will generate less cash this year, but the company said it would expect to keep its quarterly dividend at 47 cents a share (or 94 cents per American Depositary Share).

Crude oil prices fell to as low as $44.25 a barrel overnight as concerns about a global glut continued to weigh. Oil hasn’t traded above $50/bbl in over three weeks, and most analysts don’t expect the price to bottom until the second quarter of this year.