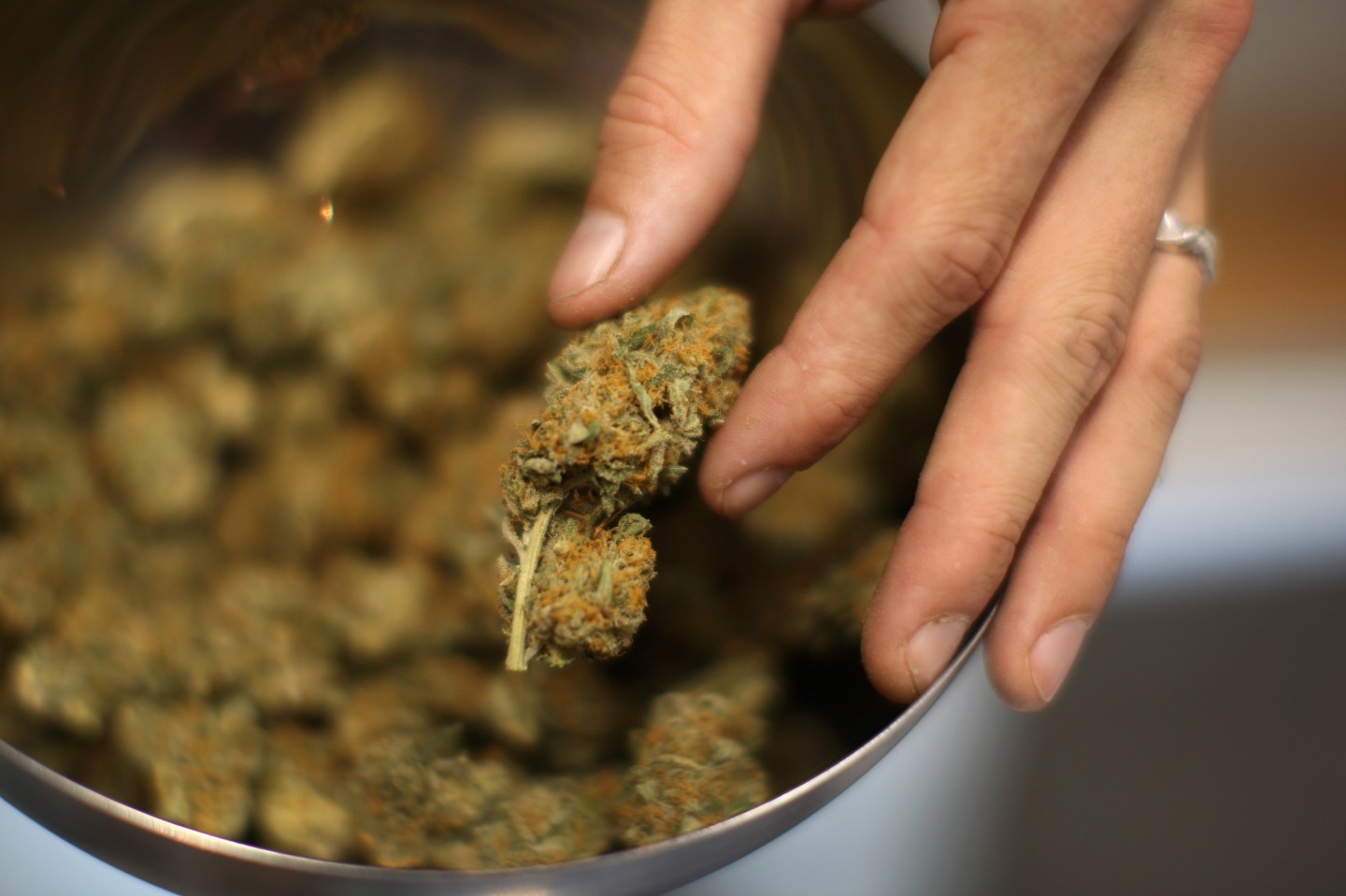 Entrepreneurs across the U.S. are flocking to the burgeoning cannabis industry as more and more states pass legislation legalizing the sale of marijuana in some form. That proliferation of pot-related businesses means that business-owners are scrambling for ways to make their brand stand out in the minds of consumers. Cue the celebrities, who have been popping up across the marijuana industry recently with product endorsements as well as their own pot-related brands.

When you think of celebrities and pot, a host of well-known weed advocates likely spring to mind. Music icon Willie Nelson is an outspoken supporter of marijuana legalization who often throws his support behind political candidates with similar views. Meanwhile, actress and co-host of The View Whoopi Goldberg penned a column last year that details her love of her vaporizer pen — a tool for inhaling weed and other herbs — and comedian Sarah Silverman even showed off her own “vape” pen on the red carpet before attending last year’s Emmy awards.

In other words, there seems to be no shortage of celebrities who would surprise no one by jumping into the legal pot business. Here’s a look at several famous names who are already looking to cash in on the “green rush”:

Sure, the reggae legend has been dead for more than three decades, but he’s still a household name and his fondness for marijuana was no secret. At the end of 2014, Marley’s family teamed up with pot-focused venture capital firm Privateer Holdings to announce a series of cannabis strains inspired by the legendary singer as part of a brand called Marley Natural. Fans could be enjoying the Marley-branded pot later this year in areas where marijuana is legal in some form.

Billionaire investor and PayPal cofounder Peter Thiel appears to be a believer. Thiel’s investment firm, Founders Fund, recently committed “multi-millions” of dollars to a $75 million funding round for Privateer, which also counts a medical marijuana growing facility and a Yelp-like website for marijuana among its holdings.

The reality television star cashed in when she sold her Skinnygirl line of low-calorie alcoholic drinks — margaritas, vodka, wine, etc. — to Beam Inc. for more than $100 million in 2011. Now, Frankel, who still partners with Beam for the Skinnygirl line, is apparently trying to expand the brand into the cannabis industry by developing a line of marijuana strains. The kicker? Skinnygirl marijuana will reportedly be engineered to eliminate the munchies.

Meanwhile, musician Melissa Etheridge wants to cater to pot enthusiasts who want to feel the effects of marijuana without having to smoke it. The Grammy-winning singer-songwriter is developing her own cannabis-infused wine. Etheridge is a vocal proponent of the medical benefits of marijuana, which she used during her battle with breast cancer. "I believe this is a huge opportunity," the musician recently told Bloomberg. "A huge business and a huge market."

Rapper Wiz Khalifa smokes a marijuana cigarette at a special screening of "Jimi: All Is by My Side" at the ArcLight theatre in Los Angeles, California September 22, 2014. The movie opens in the U.S. on September 26. REUTERS/Mario Anzuoni (UNITED STATES - Tags: ENTERTAINMENT) - RTR47B39

The "Black and Yellow" rapper told talk show host Chelsea Handler last year that he's lined up a marijuana sponsorship through a San Francisco-based medical dispensary that sells the Khalifa Kush cannabis strain. One perk for Khalifa? He said the agreement ensures that he gets all of his (legal) weed for free.

Another reason for celebs to seek out a pot sponsorship? Marketing!

Last year, A24, the distributor for director Kevin Smith's bizarre horror film Tusk, helped forge a partnership with a Los Angeles medical dispensary to create two branded cannabis strains named for the movie: Mr. Tusk and White Walrus. "This movie was born in a blaze, and will be released in a blaze," Smith joked when The New York Times asked about his film's branded weed tie-in.

The rapper — also known as Snoop Lion — has never been bashful about his marijuana-smoking habit, even going so far as claiming that he smoked pot in a bathroom at the White House. So it came as no surprise when Snoop Dogg teamed with a vaporizer company, Grenco Science, to create his own series of vaporizer products, called The Double G Series. For about $85, fans of both vaporized herbs and West Coast hip hop can buy a Snoop Dogg-branded vaporizer complete with a design featuring a roadmap of the rapper's hometown, Long Beach, Calif.

And, Snoop Dogg isn't the only rapper branching out into pot accessories. Rapper The Game has also designed a vaporizer and Lil Wayne has a line of cigars — called Bogey Cigars, formerly Bogey Blunts — targeted at marijuana smokers.

Tommy Chong got a case of the giggles as he demonstrated his special invention to "remove the smell of pot from clothes". Recently kicked off "Dancing with the Stars," the "Cheech and Chong" comedian has just launched "Tommy Chongs Smoke Swipes" which are designed to "wipe away" the stink of weed from smokers attire. "I could have used these 10 years ago to save me from a lot of headache," said the actor/comic who well is known for his advocacy of marijuana use. "While our culture is rapidly accepting cannabis consumption as a way of life, its fair to acknowledge that smelling like cannabis in many public settings may not be cool," said the Far Out Man, 76. "Now, those who partake in it can keep it to themselves," added Chong who also starred in That 70s Show as the lovable weed-head hippie Leo. The reusable Smoke Swipes, which are rubbed across clothing to neutralise odors, cost $10.99 USD per 3-pack. . .Pictured: Tommy Chong. Ref: SPL896363 211114 .Picture by: ReviverClothingSwipes/Splash . . Splash News and Pictures .Los Angeles .New York .London . . .Splash News and Picture Agency does not claim any Copyright or License in the attached material. Any downloading fees charged by Splash are for Splashs services only, and do not, nor are they intended to, convey to the user any Copyright or License in the material. By publishing this material , the user expressly agrees to indemnify and to hold Splash harmless from any claims, demands, or causes of action arising out of or connected in any way with users publication of the material.. . (Newscom TagID: spnphotosfive754191.jpg) [Photo via Newscom]

As one half of the comedy duo Cheech & Chong (with fellow actor Cheech Marin), Tommy Chong lampooned countless stoner stereotypes in a series of successful films and comedy albums. He also spent some time in prison more than a decade ago for selling marijuana pipes and bongs online. Now, Chong — who recently competed on the reality show Dancing with the Stars — is back in the pot business with Tommy Chong's Smoke Swipe, a line of dry clothing wipes meant to eliminate the odor of marijuana or tobacco smoke from smokers' clothes.

And, there could be more coming from Chong, who is reportedly developing his own branded cannabis strain. Chong also recently told The Wall Street Journal that he and his longtime comedy partner, Marin, have been negotiating with "some hedge-fund people" about further potential branding opportunities, so stay tuned.