One shot to cure them all: The quest for the universal flu shot 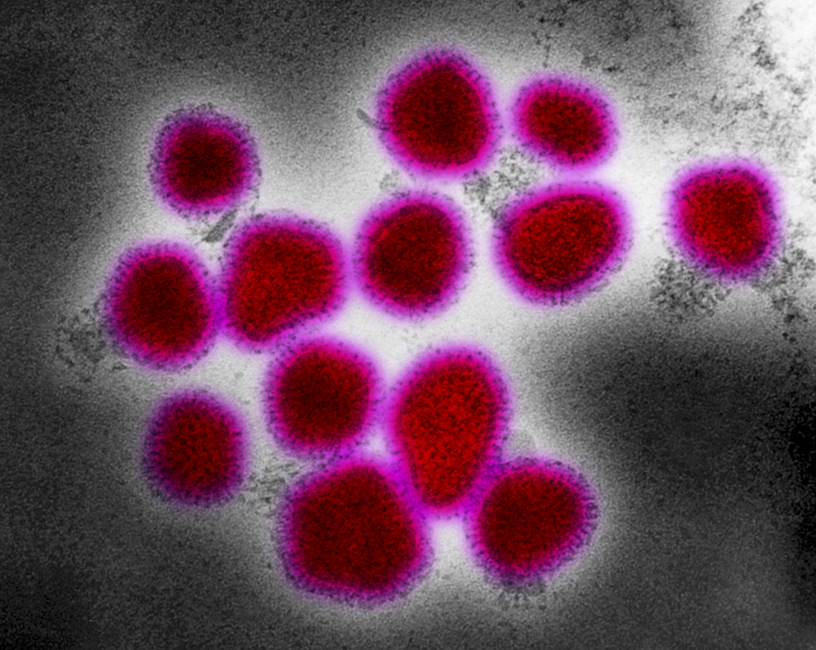 29 Sep 2011 --- Negatively-stained Hong Kong Flu Virus, the H3N2 subtype of Influeza A Virus, Orthomyxoviridae. It was responsible for the flu pandemic of 1968-1969 which infected an estimated 50,000,000 people in the United States, killing 33,000. Note the proteinaceous coat or capsid that surrounds each virion, and the hemagglutinin-neuraminidase spikes, which differ in terms of their molecular make-up from strain to strain. TEM --- Image by © Kallista Images/Visuals Unlimited/Corbis
Kallista Images/Visuals Unlim

It was just another flu virus. In February 2014, when public health officials gathered for the World Health Organization’s annual Northern Hemisphere influenza vaccine summit, most thought the Switzerland strain would be less pernicious this winter than a different strain from Texas. So when the group recommended which three strains of flu to include in the 2014–15 vaccine, this one didn’t make the cut.

Its omission is the main reason America is in the midst of a particularly nasty flu season, which in a typical year hospitalizes 200,000 people and costs the nation an estimated $87 billion in medical expenses and productivity losses. This year the lion’s share of U.S. flu cases is due to that seemingly irrelevant Switzerland strain. In fact, the Centers for Disease Control and Prevention estimated in January that this year’s vaccine is only 23% effective in preventing the flu, and even less so in people over 50. This is not bad science—it’s bad luck. It takes much of the year to test and manufacture a flu vaccine — to protect residents of the U.S. alone requires some 150 million doses. And when planning starts, it’s almost impossible to know exactly which strains will be prevalent a year hence. To complicate matters further, the flu is an especially wily virus: Its various strains mutate in a near-constant flux.


Hover over each image to see more information. (Interactive by Analee Kasudia)

“With influenza, every year it’s a crapshoot what will show up,” says Michael Osterholm, director of the University of Minnesota’s Center for Infectious Disease Research and Policy. But the flu’s potentially catastrophic cost—it kills between 250,000 and 500,000 globally each year, compared with, say, the 8,500 who have died from Ebola since 2013—makes relying on educated guesses a less-than-ideal public health policy. Osterholm says we desperately need a more broadly protective solution.

In the not-too-distant future, there could be a better way: a “universal” flu vaccine—one that would stave off all (or at least most) strains of the virus, for perhaps years at a time. The idea is to target parts of the flu virus that don’t mutate and are consistent across different strains. A handful of labs and biotech firms focusing on these common antigens have vaccines in pre-clinical and early clinical testing.

When such a universal flu vaccine will actually materialize remains a matter of conjecture. National Institutes of Health director Francis Collins, once optimistic that we could see a shot in 2016, has since pushed back that estimate several years. Andrin Oswald, who heads the vaccine division at pharma giant Novartis, predicts we won’t reach the goal for another decade. “We haven’t seen an approach that makes us confident enough to invest,” he says.

And investment here is the key. In an age of $100,000 specialty meds, flu vaccines—which can be as cheap as $2 when demand is low—are not exactly a plum business. Even as the market has grown—in 2010, the CDC expanded its recommendation for a flu vaccination to everyone over the age of 6 months—the margins are thin. While Sanofi is exploring several universal flu vaccine strategies, Novartis is in the process of selling its money-losing flu vaccine unit—and a brand new $1 billion facility—to an Australian company for $275 million.

Accordingly, most innovation has been limited to incremental improvements to the annual flu vaccine—which can now be administered through a nasal spray or a skin patch and inoculate against four strains rather than three.