The winners of Cuba’s ‘new’ economy 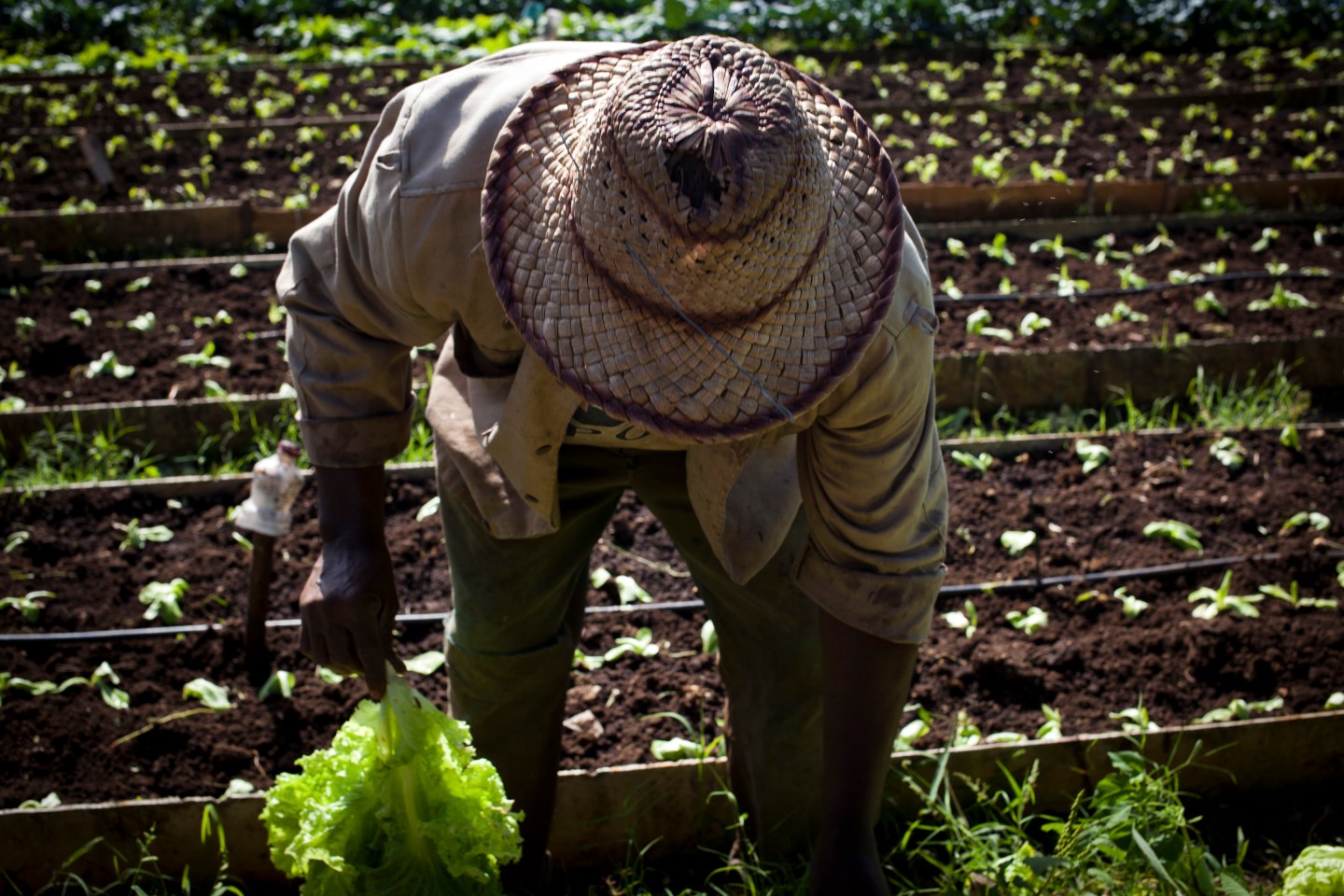 A farmer collects lettuce at a small organic cooperative farm in Bejucal, Cuba, on Saturday, Dec. 27, 2014. Cuba, which had been pushing to attract more foreign investment in agriculture even before U.S. President Obama's announcement normalizing relations, could become a significant market for companies like Caterpillar Inc. Photographer: Bloomberg
Photograph by Bloomberg via Getty Images

U.S. President Barack Obama’s recent move to normalize relations with Cuba has been called ‘historic,’ ‘courageous’ and ‘a moral victory.’ Surely any deal so hailed must carry economic consequences of similar magnitude. But that’s unlikely — and for the same reasons that America’s economic embargo against Cuba has for decades found slim policy justification and even slimmer odds of removal.

Poorly designed sanctions tend to be easily circumvented: even with the embargo in place, the U.S. is Cuba’s fifth largest trading partner, a position it has held since 2007 (helped by the decision of U.S. President George W. Bush to authorize the sale of agricultural products in 2003). Further, the fact that Europe and Asia have not joined America’s embargo means that any U.S. firm with the right finance and transport infrastructure can easily navigate around the restrictions.

And easily circumvented bans, in turn, tend to be the most difficult to remove. With such little discomfort felt by American industry, few, if any, have lobbied to end it (stacked up, of course, against a highly vocal Cuban expatriate community that, on balance, still falls reliably in favor of maintaining, if not strengthening the ban).

That is not to say there aren’t real economic stakes to the recent announcement. The current embargo policy inflicts billions in annual losses on both the U.S. (by conservative estimates, around $1.2 billion a year) and Cuban ($685 million a year) economies. The new policy will reduce these costs substantially. More important than these headline sums, however, are the sorts of winners created by the new measures.

For the U.S., most of the gains will be concentrated in agricultural and telecommunications exports. The largest winners will be farmers in the Southeastern United states, whose proximity to Cuba make their poultry, fish, rice, and corn exports to Cuba especially competitive. As of 2006, a full quarter of Alabama’s agricultural revenue came from exports to Cuba, including sales of catfish, soybeans and poultry. The largest relative gains may go to U.S. wheat and rice farmers: both trades have slumped to zero in the past five years, as financing costs made U.S. suppliers far more expensive than South American or Asian alternatives. But with the new measures, “[w]e believe our market share [in Cuba] could grow from its current level of zero to around 80% to 90%,” said Alan Tracy, president of the U.S. Wheat Associates.

All told, it could result in 6,000 new U.S. jobs. And, underscoring the irony that has characterized so much of the embargo and its consequences, Florida— home to most of the vocal and fervent opposition to the new changes— is likely to benefit economically more than any other U.S. state.

The term “state” is used advisedly here. That is because the single-biggest U.S. winner may be the nation’s capital. Indeed, the largest source of benefits are likely to come in the form of reduced federal enforcement costs of these sanctions: at least 10 different agencies are responsible for enforcing different provisions of the embargo, and according to the Government Accountability Office, the U.S. government devotes hundreds of millions of dollars and tens of thousands of man hours to administering the embargo each year. Over 70% of U.S. Treasury Department inspections each year are centered on smuggled Cuban goods, even though the agency administers more than 20 other trade bans.

For Cuba, the most significant aspects of normalizing relations with the U.S. are changes to remittance allowances and travel restrictions. The new measures build on earlier 2009 reforms—when President Obama ushered in new rules allowing unlimited family visits to Cuba—extending the categories of general licenses to a broader array of political, humanitarian, educational, and commercial purposes. The new measures also allow larger remittances— general donative remittances will now be capped at $2000 per quarter, up from $500, while remittances “for humanitarian projects, support for the Cuban people, and support for the development of private businesses in Cuba will no longer require a specific license,” according to the White House. Nor will remittance forwarders require a specific license any longer.

All of this matters because, at roughly $5.1 billion, annual remittance flows into Cuba overwhelmingly come from the U.S. In fact, remittances total more than the four fastest growing sectors of the Cuban economy combined. This differential is actually larger when one takes into account that unlike substantial costs that go into processing sugar, manufacturing drugs, and importing food, remittances do not cost the Cuban government or its broader economy anything to produce. As a measure of just how critical U.S. remittances have become for the Cuban economy, the Cuban government has begun estimating the costs of the embargo primarily in terms of how it impacts remittance.

It seems there is nothing quite so powerful as scarcity to turn communists into market-watching capitalists. The whole thing recalls another episode of Cold War sanctions when, in the early 1960s at the height of tensions, Soviet leader Nikita Khruschev found himself inexplicably more capitalist than the United States. At the time, the Soviet Union was working to develop its oil industry for strategic reasons and in hope of selling oil and gas to the West for hard currency.

One of the production weaknesses involved wide-diameter steel pipes needed to move oil from the wellhead to refineries and on to the point of sale. Rather than selling large quantities of piping, the U.S. orchestrated concerted opposition through its European and Asian alliance systems. American capitalism was abandoning its own market principles—“denying its own essential character by forgoing the possibility of trade and profit-making,” historian Alan Dobson explained. For the Soviets, this violated the order of things. Exasperated, Khrushchev reportedly burst out to his advisors, “who the hell do these capitalists think they are, to believe that they can go around and not act like capitalists?”

There are other beneficiaries to the deal beyond the negotiating parties. In Mexico, one of the two largest economies in Latin America, economists are forecasting a favorable impact on businesses that have been reluctant to invest in Cuba for fear of risking their ties to the U.S. market. They also expect more Mexican tourists to travel to Cuba. And a more economically integrated Cuba is a Cuba better able to contribute its considerable talents to some of the world’s most important fights: Cuba has sent large teams of doctors to Africa to fight Ebola and has helped to mediate the decades-long conflict in Colombia between the government and the FARC rebels. News of a deal emerged in Colombia around the same time as news of the U.S- Cuba breakthrough, as the FARC announced their cease-fire would last indefinitely unless their guerrillas were attacked by security forces.

But again, the sums and individual winners, be they American, Cuban, or otherwise, pale in comparison to what is arguably the deal’s largest victory: which, to paraphrase Mr. Khruschev, is to help all of the good capitalists act like capitalists — even, or perhaps especially, the most ardent of last century’s communists.

Jennifer M. Harris is a senior fellow at the Council on Foreign Relations. Prior to joining the council, Jennifer was a member of the policy planning staff at the U.S. Department of State responsible for global markets, geo-economic issues, and energy security. Jennifer is currently writing a book on the modern use of economic and financial instruments as tools of statecraft.