The American manufacturing renaissance that never was 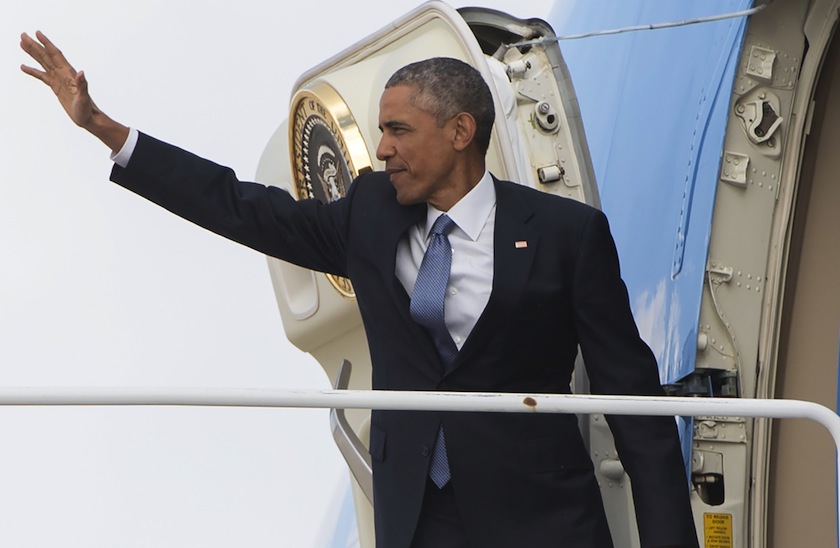 US President Barack Obama waves from Air Force One prior to departing from Andrews Air Force Base in Maryland, January 7, 2015. Obama is traveling on a 2-day trip to Detroit, Michigan to speak about the economy before traveling to Phoenix, Arizona to speak about housing. AFP PHOTO / SAUL LOEB (Photo credit should read SAUL LOEB/AFP/Getty Images)
Photograph by Saul Loeb—AFP/Getty Images

President Obama is spending Wednesday in the Detroit area, visiting a Ford assembly plant and touting his auto-industry bailout and other efforts to spur a comeback in American manufacturing.

Manufacturing has long been a top priority of the Obama Administration. Beginning with the auto bailout, which the administration now claims cost taxpayers $9.3 billion but saved more than a million jobs, Obama doubled down on his commitment to manufacturing, setting a goal of doubling American exports between 2009 and 2014.

But according to Robert Scott of the Economic Policy Institute, the U.S. economy will fall well short of that goal, as exports only increased by 48.4% over that five-year span. Not only did the U.S. economy fail to meet that goal, but the rise in exports between 2009 and 2014 was actually smaller in percentage terms than it was in the five years following the 2001 recession. Sure, declines in manufacturing employment have reversed, but total manufacturing employment remains far below levels seen ten or fifteen years ago:

US Manufacturing Employees data by YCharts

While the president might deserve credit for preventing the liquidation of General Motors (GM) and Chrysler (FCAU), there’s little evidence that his policies have helped spawn a manufacturing renaissance in America.

But with the country growing ever closer to full employment and the economy finally seeing the kind of economic growth that suggests a strong recovery, should we focus on the manufacturing sector at all?

First, there is a positive correlation between a healthy manufacturing sector and export growth. Sure, you can export services, and foreign tourists spending money stateside can help narrow the trade deficit as well. But without a robust manufacturing sector, a country will not be able to export a ton of goods. And while trade isn’t a zero-sum game—Americans aren’t necessarily worse off because they have access to cheap foreign products—importing more than you export leads to a gradual erosion of wealth.

Policy makers favor the manufacturing sector because it has historically provided good paying jobs for middle-skill workers, or those folks who have more than a high school education but not a four-year college degree. The single biggest problem facing the American economy today is stagnant wages for the median worker, and, the thinking goes, a resurgent manufacturing sector could allow a greater share of the population to enjoy the country’s economic gains.

The above chart, excerpted from a study on the American manufacturing sector by economists Martin Baily and Barry Bosworth, shows that manufacturing is going through the same transformation that agriculture underwent a century ago. At the beginning of the 20th century, roughly 40% of Americans worked on farms. Today, less than 2% do. But it’s not like we’ve stopped growing massive amounts of food; it’s just that we’ve figured out how to do it with far fewer workers.

The manufacturing growth that the U.S. is experiencing, according to Baily and Bosworth, is overwhelmingly concentrated in the computer and electronics industry. At the same time, the manufacturing jobs that we have added in recent years aren’t the kind of middle-skilled, high paying jobs that politicians covet. According to a recent study by the Brookings Institution, wages for workers in the manufacturing sector fell faster than wages in the private sector overall from 2009 to 2011, and wage growth in the sector has remained just as stagnant as overall wages since that time.

Even manufacturing powerhouses like China are shedding jobs in that sector. Even as millions of Chinese citizens leave the farm and flock to cities looking for work, there are fewer manufacturing jobs in China than there were 20 years ago. And so, even if the president could force through changes like lower corporate tax rates for manufacturers, the global trend in manufacturing is all about doing more with fewer workers. Even if you set the issue of employment aside, the U.S. trade deficit over the past five years increased, meaning that the rest of the world was more successful at selling us more stuff than vice versa.

To make matters worse, economists cannot agree on what has caused America’s manufacturing malaise or why the trade deficit is so persistently large. Some argue that we should blame large government deficits, which have pushed up the value of the dollar and made U.S. manufacturers uncompetitive. Others point the finger at China’s efforts to keep its currency artificially low. But without a consensus from the economic community, it would be unwise to risk stamping out the economic recovery by sparking a trade war with China over currency disputes or drastically reducing the budget deficit.

So, while politicians might enjoy scoring cheap political points by making speeches at manufacturing plants, the data show that there are no easy solutions to the country’s persistent trade deficit or its stagnant wages.