The weirdest gadgets of CES 2015 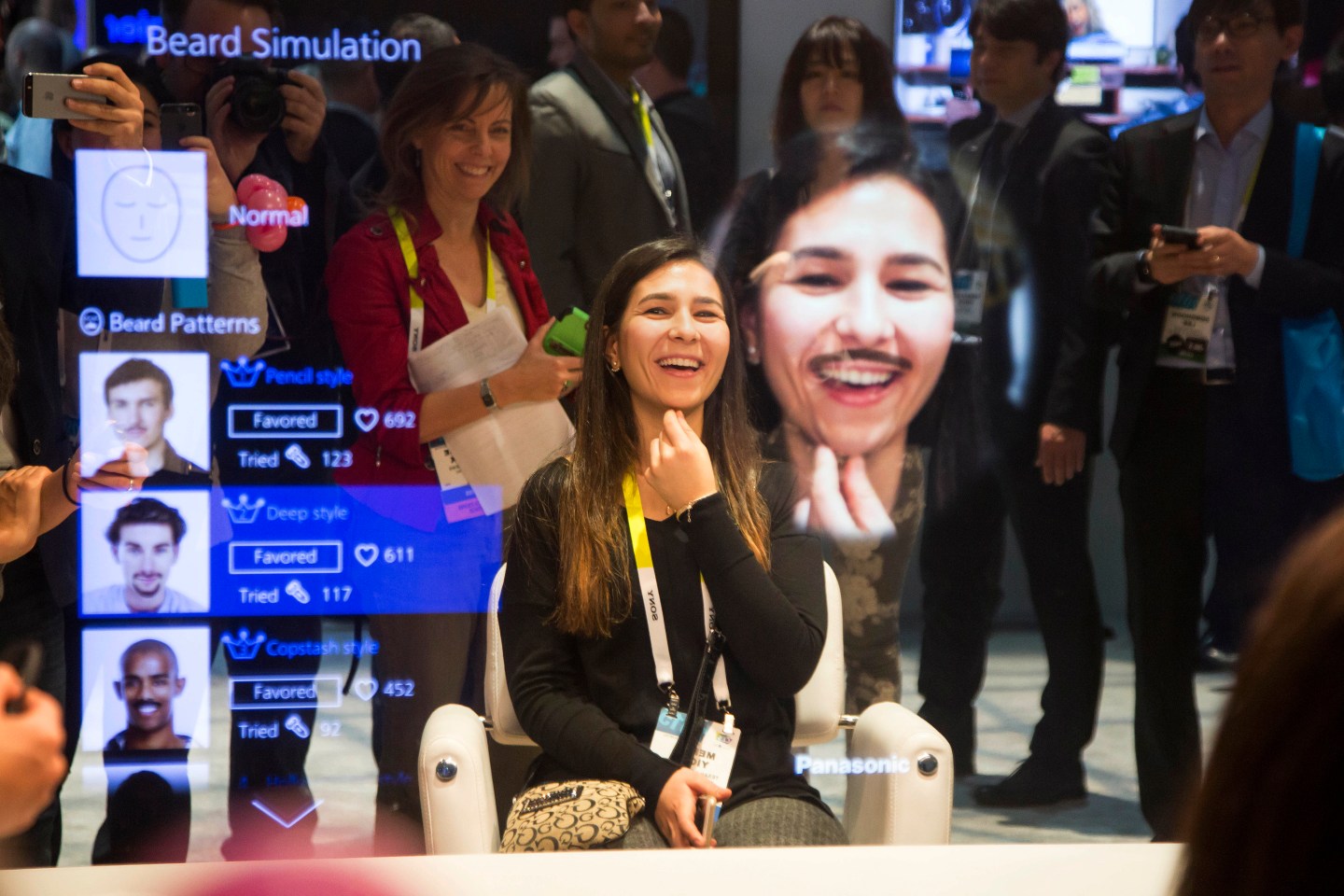 An attendee tries out the beard simulation effect on a Panasonic Corp. Smart Mirror during the 2015 Consumer Electronics Show (CES) in Las Vegas, Nevada, U.S., on Tuesday, Jan. 6, 2015. This year's CES will be packed with a wide array of gadgets such as drones, connected cars, a range of smart home technology designed to make everyday life more convenient and quantum dot televisions, which promise better color and lower electricity use in giant screens. Photographer: Michael Nagle/Bloomberg via Getty Images
Photograph by Michael Nagle — Bloomberg/Getty Images

There’s never a shortage of unusual gadgets at CES. But while items like virtual reality headsets and 4K/Ultra High Definition television sets capture the spotlight, there are just as many oddball items as well.

These gadgets may never be a big sales success – and may not even reach store shelves – but they’re often the talk of show attendees, if only because they’re so bizarrely curious.

In years past, items like the SmartFork and iPotty turned heads. Here’s this year’s crop of CES strangeness.

The Emiota smart belt is demonstrated at the CES Unveiled press event ahead of the 2015 Consumer Electronics Show in Las Vegas, on January 4, 2015.

There are plenty of gadgets at CES to help you track your fitness – and weight – but arguably none as unusual as Belty. This prototype motorized “smart belt” from Paris-based startup Emiota isn’t just ugly – and it’s certainly ugly – it also constricts and relaxes itself based on whether you’re sitting or standing. It will even send a warning to your smartphone when it thinks you’re getting lazy. Will it actually make it out of prototype? Who knows? But it’s certainly the strangest thing at CES – and one of the most talked-about items as well.

An attendee holds an Procter & Gamble Co. Oral-B SmartSeries electric toothbrush alongside an Apple Inc. iPhone during the 2015 Consumer Electronics Show (CES) in Las Vegas, Nevada, U.S., on Tuesday, Jan. 6, 2015. This year's CES will be packed with a wide array of gadgets such as drones, connected cars, a range of smart home technology designed to make everyday life more convenient and quantum dot televisions, which promise better color and lower electricity use in giant screens. Photographer: Patrick T. Fallon/Bloomberg via Getty Images

Brushing your teeth has slowly become more of a high tech affair since the invention of the electric toothbrush in 1954. But Oral-B is taking things to the next level with this Bluetooth 4.0-equipped brush that records your brushing activity - letting you chart it yourself or share it with your dentist. It will even tell you if you’re brushing too hard and when you’ve brushed long enough. And it keeps track of your brushing habits, encouraging you if they improve.

The rubber duck may be a bath time favorite for young kids, but pi labs thinks there's room to improve on the classic. This waterfowl is app-enhanced and meant to stay with your child from bath time through story time, and then be tucked in with him or her at bedtime. He's also a waterproof speaker and, in a novel twist, is temperature sensitive, alerting parents if the bath water is too hot.

Proving that just about everything is part of the Internet of Things these days, BlueMaestro has come up with pacifier that's Bluetooth-enabled. As odd as it sounds, though, there's actually a viable upside to this one. The pacifier doubles as a thermometer -- and broadcasts the child's temperature to the parent's smartphone, even tracking it if the little one has a cold. Lose the passy and your kid's having a meltdown? It also has a buzzer alarm to help you quickly locate it.

Wearable devices have so far been focused on tracking fitness activities. And the next frontier, led by the Apple Watch, seems to be using them as mobile payment devices. Thync explores a different path, though, with a wearable device that's designed to change your mood. Using waveforms that target specific neural pathways, you'll be able to enter an energized, relaxed or focused state, say Thync's creators (who have raised $13 million in venture capital funding since launch.)

Your kid's heelies have nothing on these. Rocketskates are equipped with a pair of motors on each skate, letting you reach speeds of 10 miles per hour. Strap 'em onto your existing footwear and your can zip as far as 10 miles, keeping track of your route through your smartphone (of course). Yeah, you'll look all kinds of awkward when you're walking around in 'em, but if someone gives you a hard time, you can quickly zoom away.

The company that helped make drones popular among enthusiasts wants to give you a green thumb. The Parrot Pot is, well, a pot for your houseplants that holds two liters of water and two liters of soil. Every 15 minutes, the pot will measure the soil moisture, along with the ambient temperature and light level. A quick analysis of that data lets it know how much, if any, to water your plant. And when the water in the storage unit runs low, you’ll get a warning on your cell phone.

At the 'Unveiled-event' a young man presents 'Baby Glgl' appliance for baby bottles by 'Slow Control' at the CES electronics and consumer technology tradeshow in Las Vegas, US, 4 January 2015. The show runs from 6 to 9 January 2015. Photo by: Britta Pedersen/picture-alliance/dpa/AP Images

Slow Control is a regular on the “Weird CES” list. Two years ago, it introduced the SmartFork – and this year, it’s back with a smart baby bottle monitor. Just put any bottle into the sleeve and, working in conjunction with an app, it will let you know how much your child has consumed. (It also offers feedback on holding the bottle at an angle to prevent the child from consuming air and alerts when there’s a blockage.) The device will go on sale this summer for about $100 – or you could just look at the bottle and figure out how much junior has consumed. But where’s the fun in that?

When the Coolest cooler collected over $13 million on Kickstarter, it showed there was tremendous demand for coolers that did more than keep drinks cold. The Kube seems to be riding on those coattails, but may have missed a beat. It’s a waterproof cooler and a bluetooth speaker system, but instead of expected $299 retail price of the Coolest, the Kube (which boasts fewer features) will cost an eye-popping $1,099 when it goes on sale this summer.

Weird doesn’t always mean useless. Roost batteries are designed for items like smoke detectors – which often are low on people’s priority list for checking. The wi-fi enabled batteries fire off a notification to your smart phone if the smoke alarm goes off when you’re away and alert you if they’re close to losing their charge. They’re due this summer.