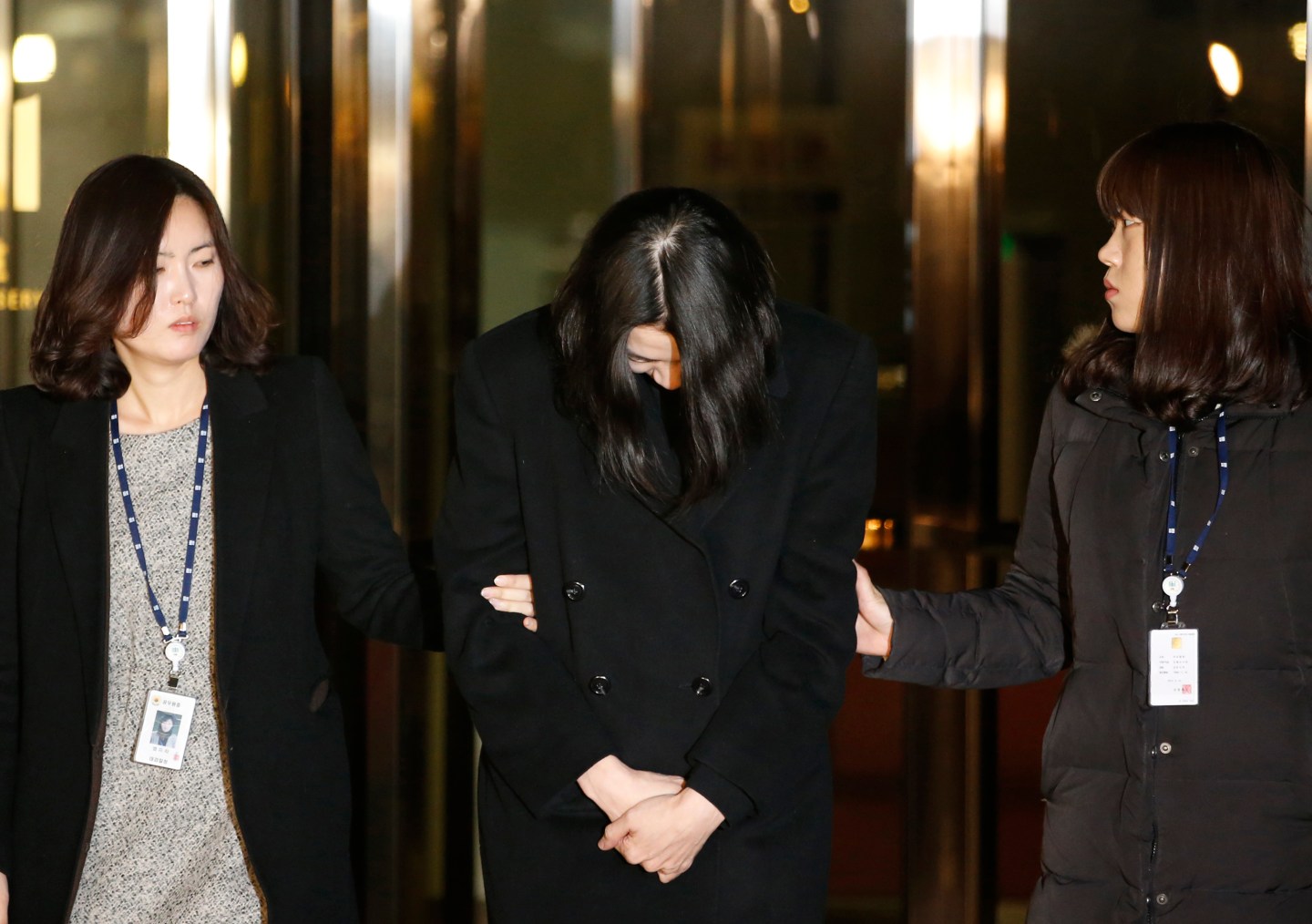 Cho Hyun-ah (C), also known as Heather Cho, daughter of chairman of Korean Air Lines, Cho Yang-ho, leaves for a detention facility after a Korean court ordered her to be detained, at the Seoul Western District Prosecutor?s office December 30, 2014. South Korean prosecutors requested on Wednesday a detention warrant for a former Korean Air Lines executive who delayed a flight because she was unhappy about how she was served nuts in first class. REUTERS/Kim Hong-Ji (SOUTH KOREA - Tags: CRIME LAW BUSINESS TRANSPORT TPX IMAGES OF THE DAY) - RTR4JN85
Photograph by Kim Hong-Ji — Reuters

A former Korean Air Lines executive who forced a plane to return to the gate because she was unhappy with how she was served macadamia nuts was detained in Seoul on Tuesday, according to news reports.

Cho Hyun-ah, the former executive vice president of Korean Air and the eldest daughter of the company’s chairman, is being charged by Korean prosecutors with violating air safety laws and keeping the crew from performing their duties.

In an infamous case known as “nut rage” or “nut gate,” Cho ordered the pilot of a Korean Air jet on the runway at New York’s John F. Kennedy airport to return to the terminal after a first class cabin steward handed her an unopened bag of nuts instead of serving them on a plate. She launched into an abusive tirade and ordered the crew member off the plane.

The incident, which took place on a Dec. 5 and ended with the flight arriving in Incheon 11 minutes late, immediately gained global attention as an example of privilege run amok. It also served as an embarrassment to Korean Air Lines, which initially issued a half-hearted defense of her behavior.

South Korea’s Transport Ministry eventually concluded that Cho, who also uses the first name Heather, had abused flight attendants during the incident. But the inquiry also exposed the cozy relationship between the airline and regulators, many of whom are former Korean Air managers.

Cho eventually apologized and stepped down from her job overseeing in-flight service along with executive posts at other subsidiaries.

While on her way to the detention facility Tuesday, Cho, escorted by officials from the prosecutor’s office, declined to respond to questions from the media other than to repeatedly say “sorry,” with head bowed, according to Reuters. Her detention came a week after local prosecutors sought an arrest warrant.

In addition to Cho’s arrest, authorities detained another Korean Air Lines manager with the last name of Yeo who is accused of pressuring two fellow employees to keep quiet about the incident to Korean investigators.