It’s not just “The Interview”: 10 other banned, withdrawn and censored movies 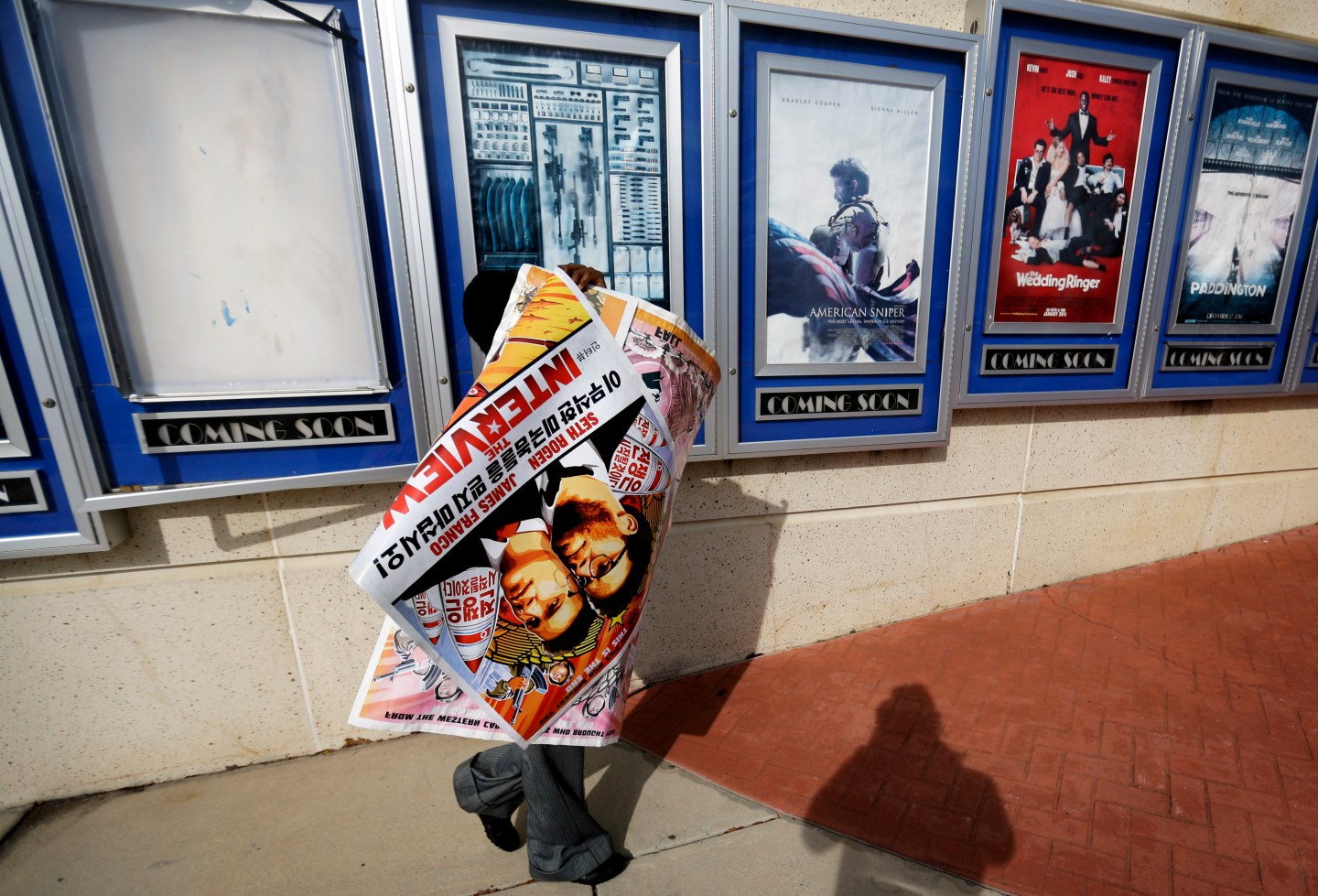 A poster for the movie "The Interview" is carried away by a worker after being pulled from a display case at a Carmike Cinemas movie theater, Wednesday, Dec. 17, 2014, in Atlanta. Georgia-based Carmike Cinemas has decided to cancel its planned showings of "The Interview" in the wake of threats against theatergoers by the Sony hackers. (AP Photo/David Goldman)
Photograph by David Goldman — AP

On Dec. 16, the cyber attack on Sony Pictures Entertainment escalated into something much more than an embarrassment to co-chairman Amy Pascal and film producer Scott Rudin.

The studio has pulled the theatrical release of the comedy film “The Interview,” which stars James Franco and Seth Rogen as journalists on a mission to assassinate North Korean leader Kim Jong-Un. The Sony hackers on Tuesday threatened to commit acts of violence against any theater showing it and Sony responded by canceling the New York City premiere the next day. Various media outlets, including Variety, have reported major US theater chains as Regal Entertainment (RGC) and AMC Entertainment (AMC) said that they would not screen the film.

The eventual fate of the movie is unclear. It may open theatrically in a few months, it may go directly to video-on-demand. It may remain in shelved-film purgatory for all eternity–though all of those outcomes are purely speculation. But whatever happens to it, it’s not alone.

Films have been withdrawn, banned and altered since the invention of celluloid, often because they inflamed the passions of a group of people, and not in a good way. Some were believed to incite violence, some were believed to condone bigotry and others simply didn’t get the legal clearances necessary to avoid copyright infringement.

Fortune presents a list of 10 movies pulled from theaters to keep the torch-and-pitchfork-wielding mobs at bay.

Actors costumed in the full regalia of the Ku Klux Klan ride on horses at night in a still from 'The Birth of a Nation,' the first-ever feature-length film, directed by D. W. Griffith, 1914. (Photo by Hulton Archive/Getty Images)

D.W. Griffith’s “The Birth of a Nation” is regarded as a movie that pioneered many of the cinematic conventions we see today. It also featured white actors in blackface, portraying black people as diabolical ogres whose sole mission in life was to rape white women, and who were kept in line by a nascent organization called the Ku Klux Klan. That it has not aged well is an understatement.

The film’s depiction of black people caused riots in numerous U.S. cities where the film was shown, such as Boston and Philadelphia. In such cities as Chicago, Pittsburgh and Minneapolis, it was denied release entirely, according to PBS.

B-2 In Kazakhstan, Borat celebrates with his neighbors his planned visit to America.

The titular character in “Borat” is a misogynist, anti-Semitic journalist from Kazakhstan played by comedian Sacha Baron Cohen. The character, who was a regular on “Da Ali G Show,” had already gained controversy in 2005, a full year before the movie was released, and the Central Asian country’s foreign ministry threatened legal action against him for his “derogatory” portrayal of Kazakhstan.

In 2006, when the movie was released, it did so without the cooperation of Gemini Films, the Central Asian distributor for 20th Century Fox, which declined to release the film in Kazakhstan. It was also banned outright by the Russian government. By 2012, the Kazakh government had changed its tune, and Foreign Minister Yerzhan Kazykhanov said, "With the release of this film, the number of visas issued by Kazakhstan grew tenfold… I am grateful to 'Borat' for helping attract tourists to Kazakhstan."

1971: Malcolm McDowell performs in a scene from the movie " A Clockwork Orange" directed by Stanley Kubrick. (Photo by Michael Ochs Archives/Getty Images)

Stanley Kubrick’s dystopian film “A Clockwork Orange” is widely acknowledged as a masterpiece. But at the time of its release, many British critics considered its violence not only repellent, but also responsible for inspiring a number of copycat crimes, including the rape of a Dutch girl by a group of men who sang “Singing in the Rain.”

The director responded by delaying the film’s general release and limiting its run to a single London theater, in the hopes of riding out the controversy. However, the controversy never went away -- so in 1973, Kubrick himself withdrew the film and banned its exhibition in the United Kingdom. It stayed that way until after his death in 1999, according to PBS.

“Ernest and Bertram” is a 2002 short film that premiered at the Sundance Film Festival. The action centers on the “Sesame Street” characters Bert and Ernie, the latter of whom harbors an unrequited homosexual attraction to the former. Distraught, Ernie commits suicide, in a move reminiscent of Lillian Hellman’s “The Children’s Hour.”

The producers of the eight-minute film immediately received a cease and desist order from Sesame Workshop for copyright violation, as the film uses the characters and the “Sesame Street” theme song without permission. It has never been shown since.

Although tame by today's standards, the 1972 Bernardo Bertolucci film "Last Tango in Paris" caused an uproar when it was released. The romantic film featured frank depictions of human sexuality, and famously made "get the butter" a household phrase.

The film was considered so scandalous at the time of its release that it was banned in Nova Scotia. In Italy, the director’s own country, the response was even more draconian – not only was it banned, but Bertolucci himself was charged with obscenity, slapped with a four-month suspended sentence and deprived of the right to vote for five years, according to The Guardian.

Willem Dafoe raising his arms in a scene from the film 'The Last Temptation Of Christ', 1988. (Photo by Universal/Getty Images)

Martin Scorsese’s “The Last Temptation of Christ” depicts Jesus as a flesh-and-blood man struggling with temptations that are all too human. It features Jesus consummating his union with Mary Magdalene, among other heresies; it was just too much for some people.

Protesters turned out in force, causing such U.S. exhibitors as United Artists and General Cinemas to refuse to show the film in their combined 3,500 theaters, according to PBS. In October 1988, the Cinema St. Michel in Paris showed it, and was attacked by arsonists who caused a fire that injured 13 people, according to The New York Times.

1979: Members of the British comedy team, Monty Python, during the filming of their controversial film 'The Life of Brian', (from left) John Cleese as a centurion, Michael Palin as Pontius Pilate and Graham Chapman as Biggus Dickus. (Photo by Evening Standard/Getty Images)

The film was banned outright in Norway, a fact that caused Swedish advertisements for the film to declare it “the film that is so funny that it was banned in Norway." In 2009, a full 30 years after the film’s release, the Welsh town of Aberystwyth finally lifted its ban of the movie, and held a special screening attended by cast members Terry Jones, Michael Palin and Sue Jones-Davies, who was also mayor of Aberystwyth at the time of the screening.

The fourth installment in the Sylvester Stallone franchise, 2008’s “Rambo,” features Sly reprising his role as the emotionally damaged Vietnam veteran. This time, he is called upon to save a group of missionaries from the bloodthirsty Burmese military.

The ridiculously violent movie was banned by the Burmese government, presumably because they didn’t like the film’s depictions of its soldiers as subhuman brutes best suited to onscreen disembowelment.

2010’s “A Serbian Film” is considered one of the most offensive movies ever made. It offers every depraved barbarism known to cinema, and wades knee-deep in a slurry of gore, sadism and sexual atrocities too disturbing to list in a family publication.

The movie was banned in Spain, Australia, and countless other countries. If this fact piques your curiosity and makes you want to see what all the fuss is about, you would do well to pay heed to Bloody Disgusting critic Tex Massacre, who said of it, “You don’t want to see ‘A Serbian Film.’ You just think you do.”

Not amused by this was Karen's brother and band mate Richard Carpenter, who sued Haynes for copyright infringement, a case which he easily won, since the director hadn’t gotten permission to use the Carpenters’ songs that appear in the film. According to Dangerous Minds, the film is illegal to exhibit, and although the Museum of Modern Art in New York City has a copy, they’re not allowed to screen it.