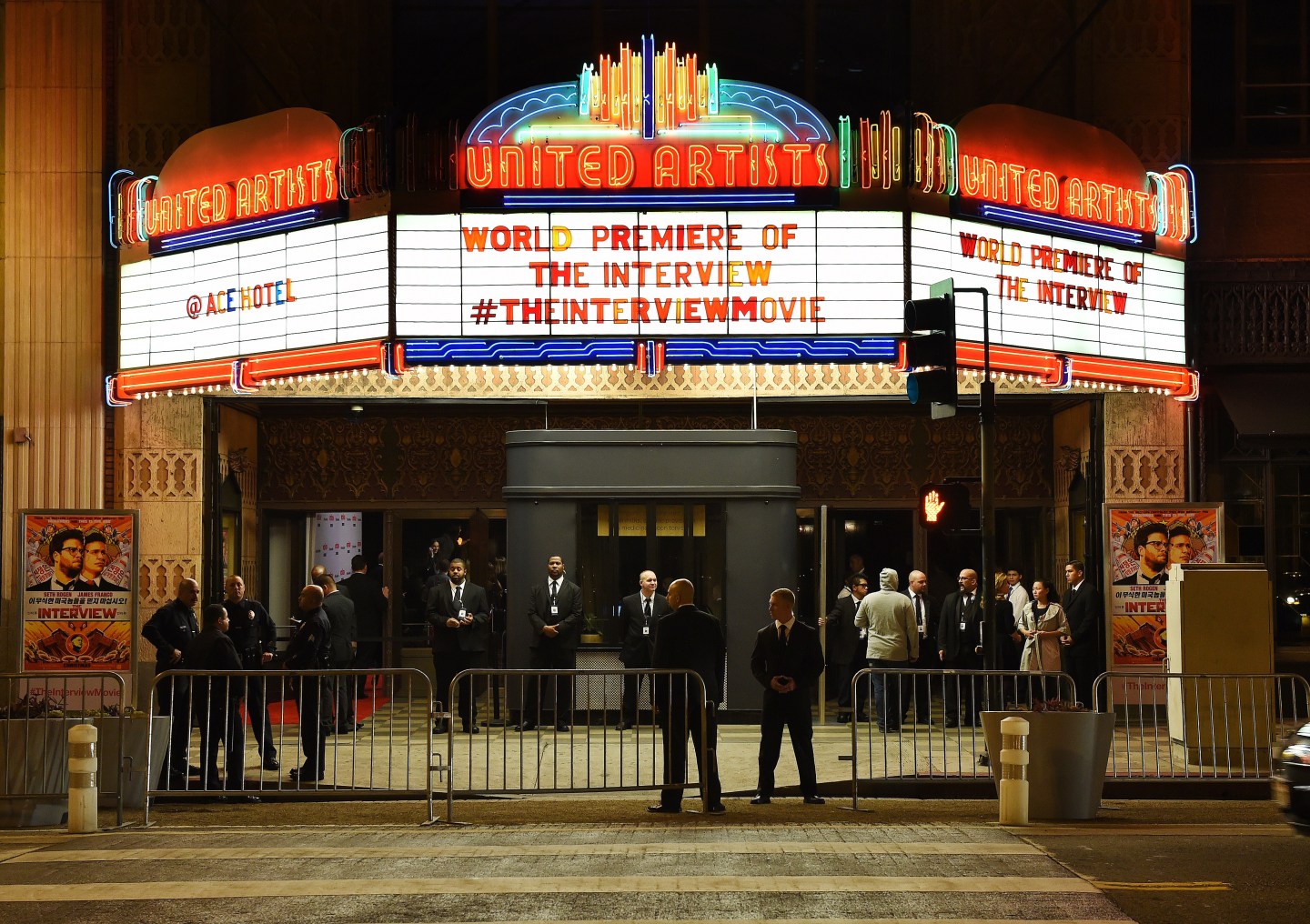 Security is seen outside The Theatre at Ace Hotel before the premiere of the film "The Interview" in Los Angeles, California on December 11, 2014. The film, starring US actors Seth Rogen and James Franco, is a comedy about a CIA plot to assassinate its leader Kim Jong-Un, played by Randall Park. North Korea has vowed "merciless retaliation" against what it calls a "wanton act of terror" -- although it has denied involvement in a massive cyber attack on Sony Pictures, the studio behind the film. AFP PHOTO/STR (Photo credit should read -/AFP/Getty Images)
Photograph by AFP/Getty Images

The White House is treating the massive hack of Sony Pictures Entertainment as a “serious national security matter” and is currently devising a “proportional response” to the cyberattack, Press Secretary Josh Earnest said Thursday.

Earnest said there have been a number of daily meetings at the White House about the hack, and that there are “a range of options that are under consideration right now” for a response. Earnest would not rule out a U.S. cyber counterattack on those behind the Sony hack, saying officials are mindful of the need for a “proportional response.”

“This is something that’s being treated as a serious national security matter,” he said. “There is evidence to indicate that we have seen destructive activity with malicious intent that was initiated by a sophisticated actor.”

Earnest would not publicly name the “sophisticated actor” behind the attack, even as U.S. officials have linked North Korea to the hack—something Pyongyang has denied. “I’m not in a position to confirm any attribution at this point,” Earnest said.

The incident remains under investigation by the Federal Bureau Investigation and the National Security Division of the Department of Justice, and Earnest said those efforts are “progressing.” Earnest said it’s unlikely officials will be able to fully disclose the eventual response. “I don’t anticipate that we’ll be in a position where we’re gonna be able to be completely forthcoming about every single element of the response that has been decided upon,” he said.

Asked about Sony’s decision to pull the film The Interview from distribution in response to threats of 9/11-style attacks from hackers, Earnest said: “The White House stands squarely on the side of artists and other private citizens who want to freely express their views.”

“This is a decision that Sony should make,” Earnest added. “This is a private company.”

The hack exposed reams of employees’ data and embarrassing email exchanges between executives. It came as Sony was preparing to release The Interview, which has been fiercely criticized by North Korea for depicting a fictional assassination attempt of the country’s leader, Kim Jong Un. With a growing number of movie theaters saying they wouldn’t screen the film amid the threads of attack, Sony canceled its release late Wednesday.

“Administration officials were consulted about the film prior to its release at the request of the company that was producing the movie,” Earnest said, confirming that officials had screened the film.