No more iPhones in Moscow, no dollars in Vladivostok, but ruble steadies 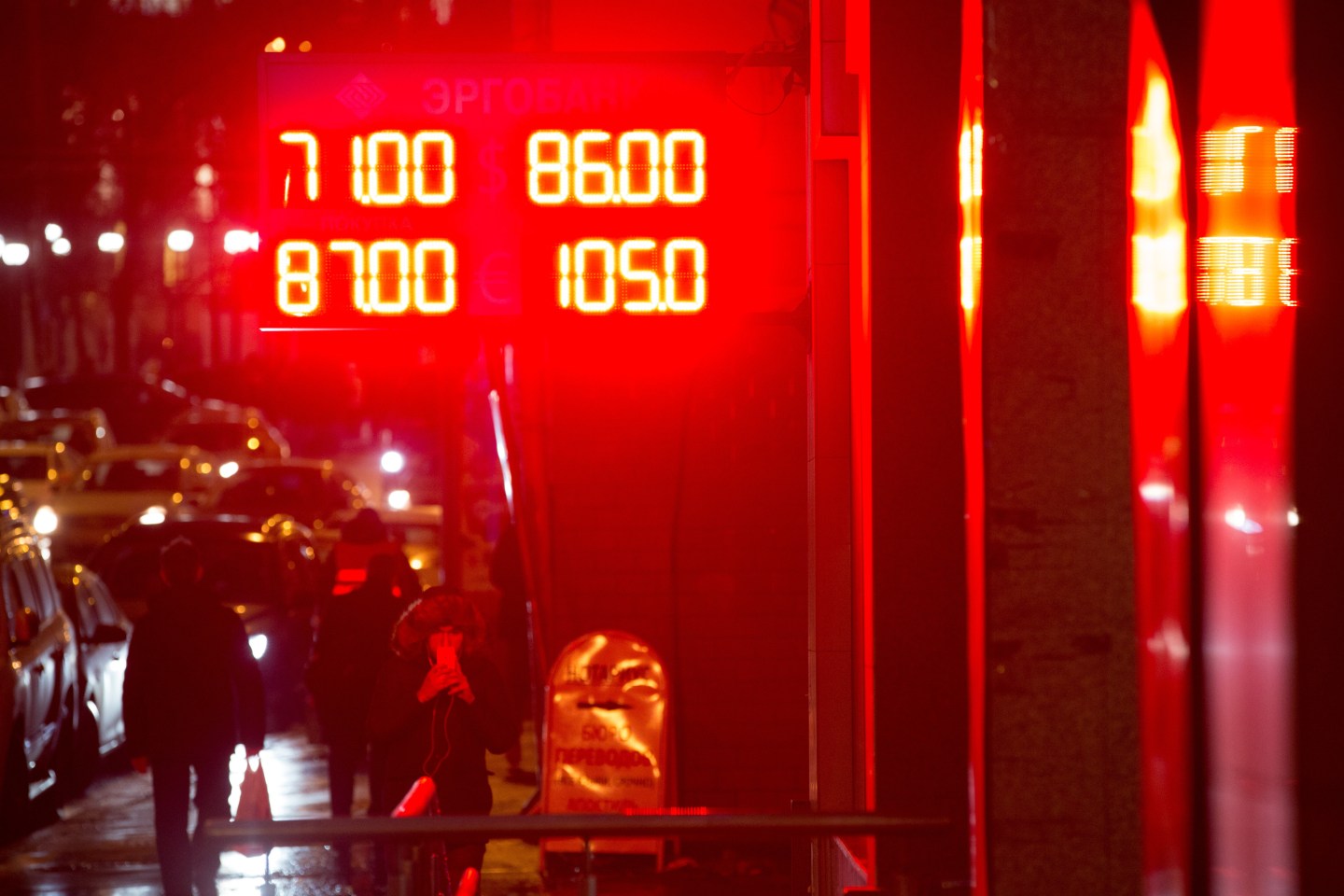 The latest foreign exchange prices for Russian rubles, euros and U.S. dollars sits on a neon display sign outside a currency exchange bureau in Moscow, Russia, on Tuesday, Dec. 16, 2014. The ruble sank to a record, deepening Russia's currency crisis, as people scrambled to convert their money into dollars after a surprise interest-rate increase failed to shore up investor confidence. Photographer: Andrey Rudakov/Bloomberg via Getty Images
Photograph by Andrey Rudakov — Bloomberg via Getty Images

A fragile peace descended on Russia’s very own currency war Wednesday after intervention by the Finance Ministry to support the ruble.

The ruble has lost nearly 20% of its value against the dollar in a slide unparalleled since Russia’s 1998 default. But the action shifted from the dealing screens to Main Street Wednesday as customers flocked to buy high-end western goods while they still could.

At a late night meeting Tuesday, the government had decided against reintroducing capital controls, and against forcing exporters such as the country’s oil or metals companies to convert their export revenues back into rubles immediately. Economy Ministry Alexey Ulyukayev insisted that the currency is now “extremely undervalued”.

But the authorities found themselves facing a tough audience: Apple Inc. (AAPL) suspended sales in rubles on its Russian iTunes store overnight, citing the excessive volatility. Many shops in Moscow had reportedly sold out of their remaining iPhone and other Apple hardware as customers rushed to buy before retailers jacked their prices up again in response to the ruble’s fall. Apple had already raised its prices by over 20% at the end of November.

There were further signs that the general population is taking fright at the currency crisis, with people changing their incomes and savings into dollars or euros while they can. The news agency Interfax reported Wednesday that a large number of currency booths in the city of Vladivostok in Russia’s far east had closed after running out of foreign exchange. By midday, Komsomolskaya Pravda was reporting the same had happened in Moscow too.

Russia’s state-owned banks can absorb such surges in demand for dollars (although one–Russian Agricultural Bank–was forced to deny Wednesday that it had stopped lending), but the country’s private-sector banks are more vulnerable. Many no longer have enough collateral left to pledge at the central bank to raise the funds they need to meet clients’ demands.

The ruble’s collapse continues to send shock waves around the world. They were felt as far afield as Hong Kong Wednesday, where Chinese carmaker Geely, which owns Sweden’s Volvo and the maker of London’s black taxis, saw its shares fall over 10% after announcing an “unrealized foreign exchange loss” by its Russian subsidiary.

By early afternoon in Moscow, the ruble had stabilized at around 68.25 to the dollar, down 0.3% from Tuesday’s close, after swinging 3% in both directions as the Finance Ministry’s sale of its foreign exchange deposits turned round a weak opening.

It’s unclear how many dollars the Ministry sold. But Deputy Finance Minister Alexey Moisseev told reporters it had around $7 billion in deposits not earmarked for the country’s Sovereign Wealth Fund and would sell “as much as necessary.”

The trouble is, that’s a drop in the bucket compared to the Central Bank’s reserves of over $416 billion, which remained inexplicably unused Tuesday as the ruble tanked. The CBR has burned through $90 billion of reserves so far this year, including $4.3 billion alone on Friday and Monday.