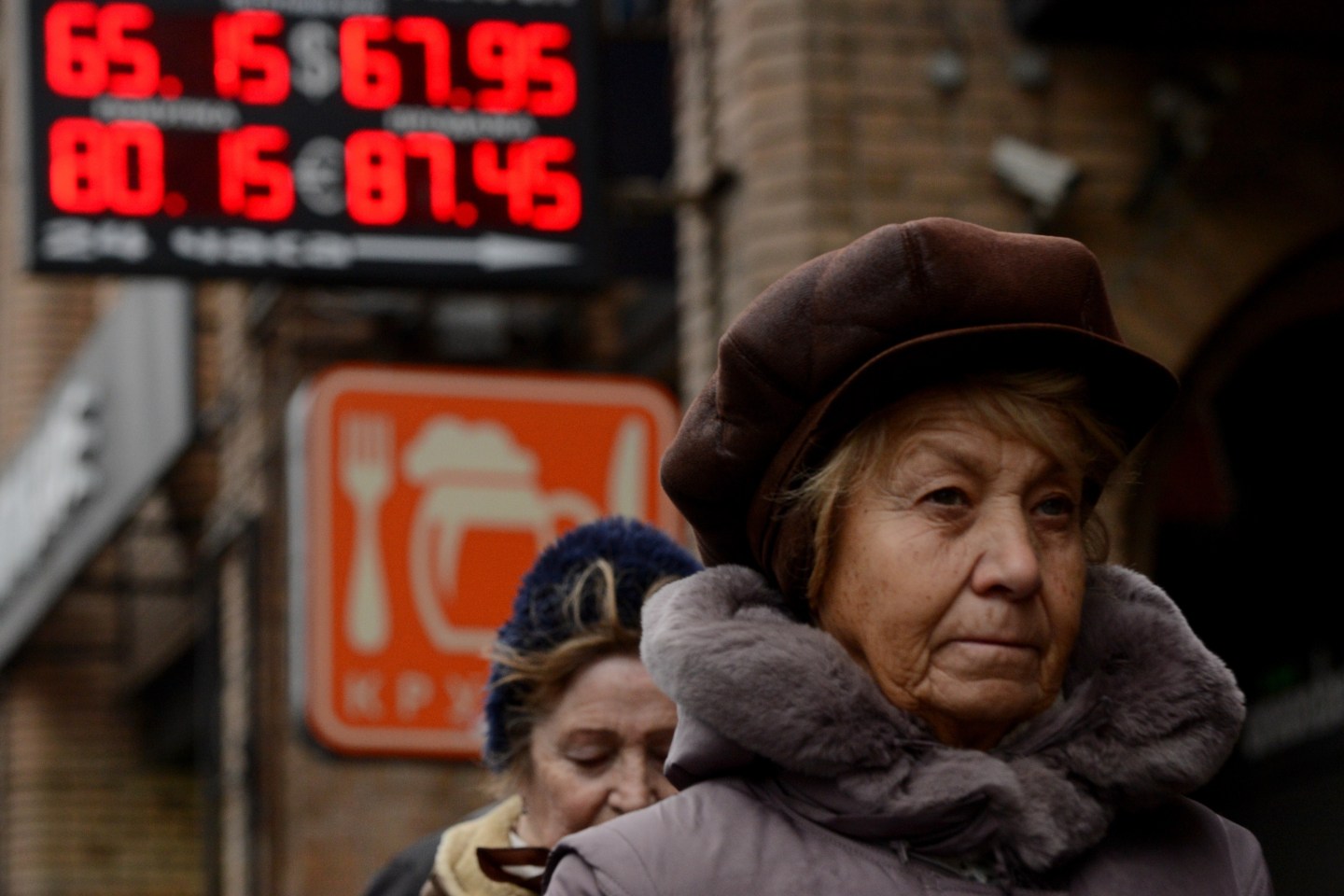 The rout in emerging markets continued Tuesday with Russia again to the fore, as an emergency interest rate hike by the central bank failed to stop panic selling of the local currency, stocks and bonds.

Selling across emerging markets has intensified and spread out this week as fears about tighter U.S. monetary policy, slowing global growth and country-specific problems in Russia and Ukraine have combined to create a storm which, if not perfect, is at least pretty adequate.

The Federal Reserve’s Open Market Committee meets later this week and is expected by many to drop its commitment to keeping interest rates at their current low level “for an extended period of time,” as the U.S. economy gains strength. That will end a period of nearly six years of nearly free money for global capital markets, raising problems for those who have squandered it in the meantime.

By early afternoon in Moscow, the dollar had surged 8.6% to a new all-time high of 71.26 and the dollar-denominated RTS stock index had fallen 15% to its lowest level since March 2009, as investors ignored the central bank’s decision to raise its key refinancing rate to 17% from 10.5% as of midnight. The pace of selling had eased off by mid-morning, but picked up again as the U.S. woke up.

In a television interview, central bank governor Elvira Nabiullina said the ruble was now clearly undervalued, but stressed that Russian companies would be able to repay their foreign debts, one of the biggest concerns among market participants right now.

The ruble had risen by more than 9% initially in response to the central bank’s move, but quickly gave up all its gains as world oil prices–on which Russia depends for its budget–fell further in response to weak economic data from China. The benchmark price of crude fell to its lowest level since April 2009, trading as low as $54.34 a barrel, before rebounding later on more encouraging news out of the Eurozone.

“Oil prices clearly continue to hang like an enormous black cloud,” ADM ISI analyst Marc Ostwald wrote in a note to clients Tuesday, pointing to signs of contagion to other emerging markets.

Russia is only one of a number of oil-dependent emerging markets that have been hit hard by the drop in crude. Elsewhere, Venezuela’s bonds due 2027 fell over 8% Monday to less than 38 cents on the dollar, their lowest level since 1998. President Nicolas Maduro, who has largely continued the unorthodox economic policies of his predecessor Hugo Chavez, had said over the weekend he saw no need to cut subsidies on gasoline prices that many economists see as ruinous. He was also less than reassuring on the possibility of default, according to Bloomberg News, saying that: “There is no possibility of default, unless we would decide to not pay anymore as part of an economic strategy for development.”

Dubai’s stock market also remained in freefall Tuesday, the DFM index falling another 7.3%. It’s now down nearly 20% in less than a week.

But the shock waves going through markets have affected more than just oil producers. Countries with high foreign debt, low reserves or weak current accounts are all being placed under a harsh spotlight–especially if their domestic politics is also generating bad news.

That’s certainly the case for Turkey, whose currency hit a new all-time low of 2.38 to the dollar Tuesday after falling 3% on Monday after police arrested dozens of opposition journalists in a crackdown on independent media at the weekend. Those arrested had been instrumental in exposing widespread government corruption over the last year.

“The Turkish authorities have a track record of using the broadly phrased anti-terrorism legislation, under which these arrests were made, to target political opponents and there is good reason to believe that is what is happening here,” Amnesty International said in a blog post.

In Asia, the Indonesian rupiah and Indian rupee continued to fall, along with their respective stock markets, despite the fact that both countries, as net importers of oil, should face less pressure on their current accounts.

ADM ISI’s Ostwald said recent moves had been exacerbated by the fact that financial regulation since the crisis had dried out liquidity in many markets, making them inherently more volatile. Many Wall Street and European banks have largely withdrawn from more exotic financial markets owing to higher capital requirements, while the increasing share of “passively” managed investment funds that use automated programs to update their portfolios has reinforced a tendency to herd behavior.