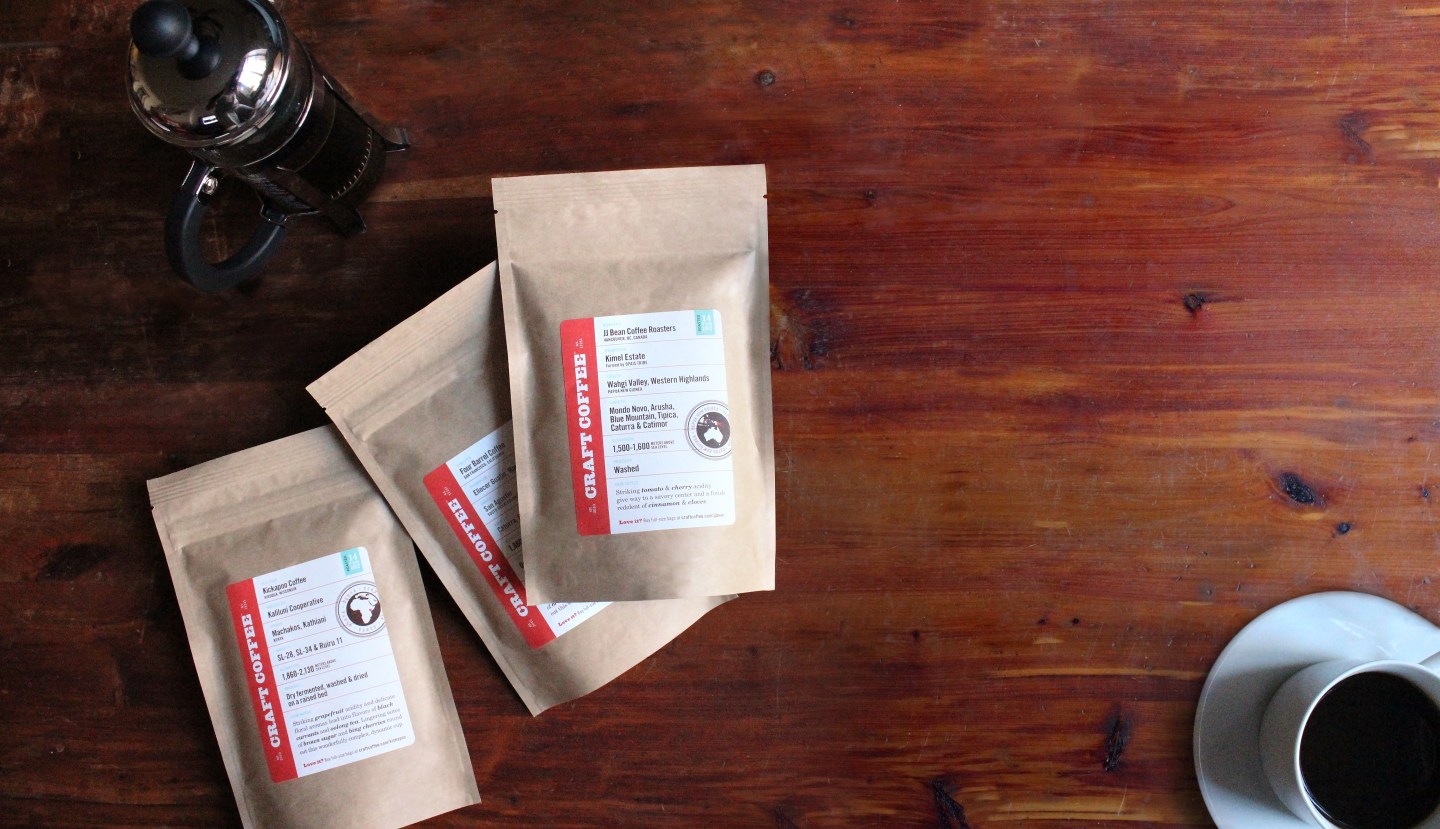 “I’m pretty confident we’re the only true tech startup in coffee,” says Michael Horn, founder and CEO of Craft Coffee. “People have tried to sell coffee on the Internet, but what we’re doing is different.”

What Craft Coffee is doing is, in fact, selling coffee on the Internet. That’s what it has done since 2010, when Horn started the site out of the General Assembly co-working space in New York. But over the summer, Craft Coffee participated in Y Combinator, the Silicon Valley accelerator. While living and working alongside tech startups in fields such as nuclear fusion and data science, Horn adopted a more tech-focused strategy.

At Y Combinator’s demo day in August, Horn unveiled The Coffee DNA Project. No longer a mere purveyor of coffee, Craft Coffee is now “Pandora for Coffee.” Like the Internet radio company, Craft Coffee now uses an algorithm to determine which kinds of artisan coffee its customers might like. Unlike Pandora (P), it will then sell customers that artisan coffee.

To create its coffee recommendations, Craft Coffee has acquired a $10,000 industrial machine called an Agtron Coffee Roasting Analyzer. It was invented by “a literal mad scientist who knows everything about coffee,” Horn says. Mass coffee producers use Agtron machines for quality control, since it can analyze the organic chemistry of ground coffee and assign it an integer. But Craft Coffee uses the Agtron to compare different coffees. “We can put Folgers in there and we know it’s a ‘52’ or whatever,” Horn says. “That gives us the key number to be able to be a data science company.”

The Agtron machine sits on the counter in Craft Coffee’s Williamsburg loft among three pour-over coffee makers and a handful of coffee pots. Nearby, an old clawfoot bathtub overflows with bags of store-brand coffee beans. Those beans, ranging from Folgers Classic to Starbucks Pike Place Roast, must be tested so that Craft Coffee has a jumping-off point for its recommendations. When you tell Craft Coffee that you like Folgers, the site can recommend an independently-roasted coffee with similar characteristics. All of the beans sold on Craft Coffee are strictly vetted by a team of blind-testing experts that are basically coffee sommeliers. And Horn himself, who says the job has made him a coffee expert. “We’ve never shipped a cup of coffee that I didn’t like or think was special,” he says.

Horn touts the benefits of drinking artisanal coffee: It’s roasted to order by a small independent, American roaster. If all goes as planned, upscale coffee could follow a path similar to that of the craft beer movement, which is quickly gaining widespread adoption. “You don’t have to be like a hipster Brooklyn coffee shop person to have a decent cup of coffee in the morning,” Horn says. Nevermind that we are in Williamsburg, the birthplace of Brooklyn hipsterdom. The movie theatre next door to Craft Coffee’s loft sells $8 popcorn doused in truffle butter and citric salt.

Craft Coffee’s DNA project is meant to take the hipster element—and its intimidation factor—out of drinking fancy coffee. Anyone who has asked for iced coffee with milk at Blue Bottle understands the concept of “coffee-splaining.” (The company’s designer iced coffee is not meant to have milk; for that, one must order a sticky-sweet New Orleans Iced.) I’ve been coffee-splained a few times, and I prefer regular old deli coffee because it is hot and functional. But I will admit that the “comforting” cup of Bow & Arrows coffee one of Horn’s associates brewed for me—chosen because of its “not too crazy” flavor profile—was quite delicious.

One floor down, a Craft Coffee worker measures, bags and heat-seals coffee bean bags for shipping to customers. Today it’s a one-man job (and yes, company was staffed entirely by men on the day I visited). Horn says Craft Coffee is able to ship “millions of dollars” worth of coffee from this small fulfillment center. He touted the “scrappy” nature of the operation, while noting that it is “just like Amazon,” because it can stock every independent coffee. “No one—not even Starbucks—can stock that many coffees in its stores,” he says.

Craft Coffee hasn’t announced any new venture funding since graduating from Y Combinator, but it previously raised seed funds from the likes of Reddit co-founder (and Y Combinator partner) Alexis Ohanian and 500 Startups founder Dave McClure. “There’s never been a tech company in coffee that’s had tech company funding,” he says. (To be fair, Blue Bottle has raised $45.7 million in venture capital and is open about how it uses technology, but the company does not appear to be building a recommendation engine. Other gourmet coffee companies, such as Stumptown Coffee Roasters, La Colombe Torrefaction, and Joe, have also attracted tech investor interest.) At some point, likely after the holidays, Craft Coffee will raise more funding to scale up like a tech startup.

Horn is at least thinking like a startup, grand vision and all. “What if one company could own the taste preferences on every coffee drinker in the country?” he asks. “We think it could be as revolutionary as Pandora for music.”