4 ways to convince Millennial workers to stick around 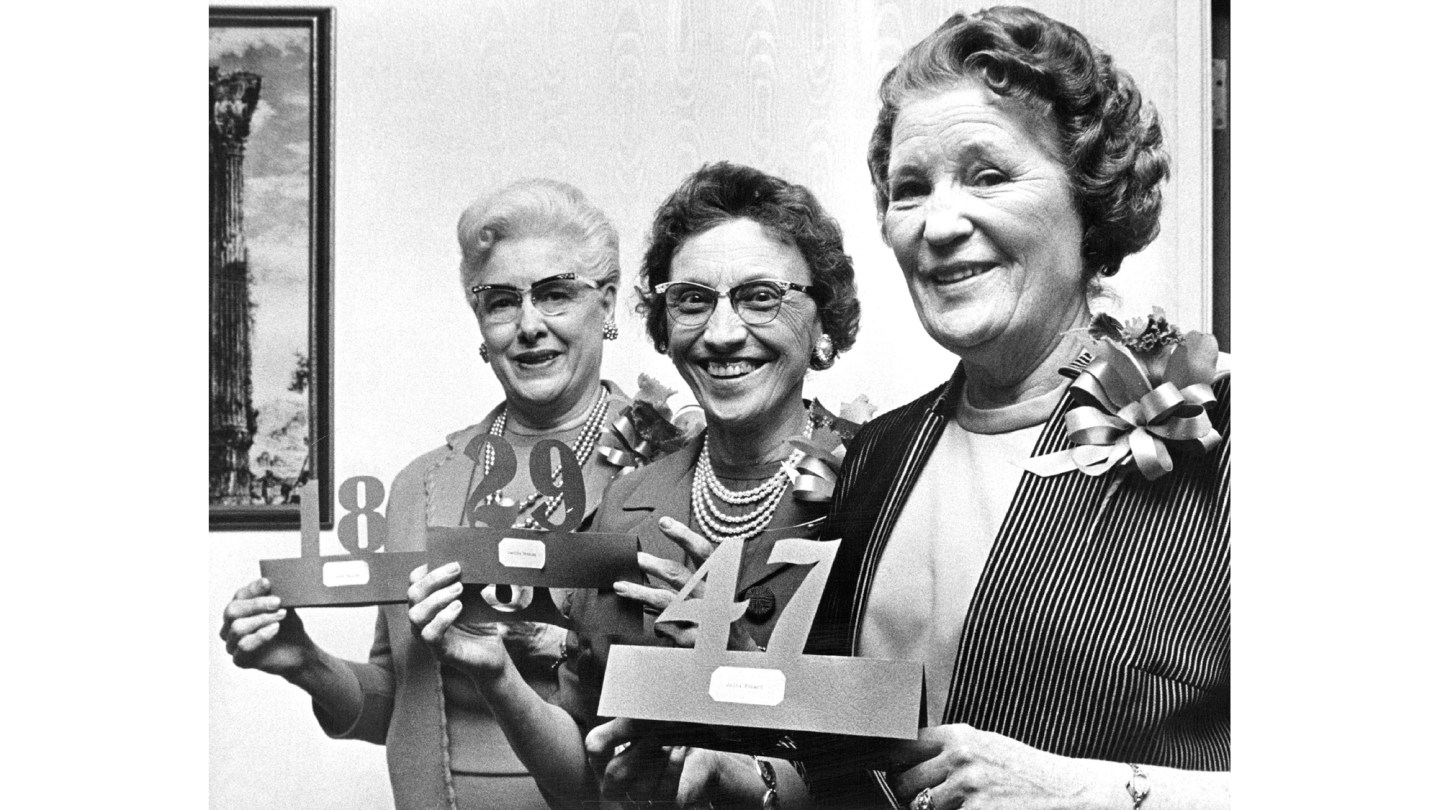 FEB 23 1965, FEB 25 1965 'Easy Life' Ahead Officers of The Title Guaranty Co., 1720 California St., this week honored three retiring women office employes who have spent 94 years, collectively, with the company. A luncheon was given for the women at the Denver Ath­letic Club and they were presented with orchid corsages. The honorees are, from left, Mrs. Irene English, with the company 18 years; Miss Juanita Bradley, 29 years, and Miss Julia Robert, 47 years. Credit: Denver Post Photo
Photograph by Bill Johnson — Denver Post Archive/Getty Images

Dear Annie: I’m in charge of a product development team at a Fortune 500 company, and right now the division head and I are setting a couple of big goals for 2015, especially regarding products we want to roll out by mid-year. I think our deadlines for different phases of these projects are realistic, but our ability to meet them depends partly on keeping the same people we have now, because having to bring replacement hires up to speed would really slow us down.

The main thing that worries me is that, out of the 22 people who report to me, 12 are in their mid-twenties to early thirties. Our whole company has had a problem recently with high turnover in this age group. Do you have any suggestions about how to hold on to them, at least for the next few months? — Fingers Crossed

Dear F.C.: It’s true, Millennials are quicker to jump ship than any other generation of employees, especially Baby Boomers. One new study from Payscale.com, for instance, says that more than 40% of Boomers think people should stay in one job, or at least one company, for at least five years. A scant 13% of Millennials agree.

There’s also lots of evidence that young workers hold much different expectations about work than their elders ever did. So bosses intent on keeping them around may have to make some specific changes in the way they lead their teams. “Millennials want more openness and transparency,” observes Kris Duggan, CEO of BetterWorks, which makes a software platform aimed at helping businesses reach goals. “They also need more encouragement, and more of a sense that they’re making progress, than most managers are used to giving people.”

Both as a co-founder of gamification company Badgeville and from working with BetterWorks clients now, Duggan has seen close up what works, and doesn’t, in inspiring twenty-something talent to stay put. He recommends these four steps:

Make goals clear, both theirs and yours. “Millennials crave structure and guidance, so set clear expectations,” Duggan says. At the same time, explain what your own goals are — meeting each of those demanding deadlines, for instance — and why they matter, not just to your team but to the division and the whole company.

“Often, managers just assign tasks without explanation, so people don’t see what their bosses are trying to accomplish,” notes Duggan. “But it’s important to Millennials that you connect those dots. They want to see the big picture.”

Get out of their way. Once you’ve explained exactly what has to get done, Duggan says, “step back and let them figure out how to do it. You really shift from being a manager to acting as more of a coach, and encourage them to figure out the details.” Millennials tend to rebel against micromanagement (even more than most other people), he adds, so avoid it. Your role is to help — in setting small interim goals and deadlines that lead up to larger ones, for example — without hovering.

Give lots of positive feedback. Much has been made of Millennials’ upbringing as the overpraised generation, where everybody wins a trophy just for showing up. But, according to Duggan, applauding progress and celebrating milestones at work is not about that supposed sense of entitlement. Rather, he points to research showing that people who use a pedometer or FitBit to measure how much they walk each day take 30% more steps than people who don’t.

That’s not a coincidence. “Knowing how you’re doing, and having your progress acknowledged, is immensely motivating,” he says, and the more frequently, the better. “Annual performance reviews do not work with Millennials,” he adds. “They look for feedback and direction every week or two.”

Show them a career path. Despite what often looks like a disjointed series of short-term moves, Millennials are “intensely focused on the long term. They want to see how their current job fits into their whole career plan,” Duggan says. “By having open conversations about how to be successful at different levels throughout the company, and what it takes to be promoted, you can take something very abstract and make it real.” Talking about the future might also give Gen Yers a reason to look for their next job in-house, instead of somewhere else.

Any team leader who wants to create a Millennial-friendly culture can do it, Duggan says, and January “is a great opportunity to start being more open and collaborative — new year, new goals, new transparency.” Good luck.

Talkback: If you’re a Millennial, what would entice you to stay with your current employer? Leave a comment below.