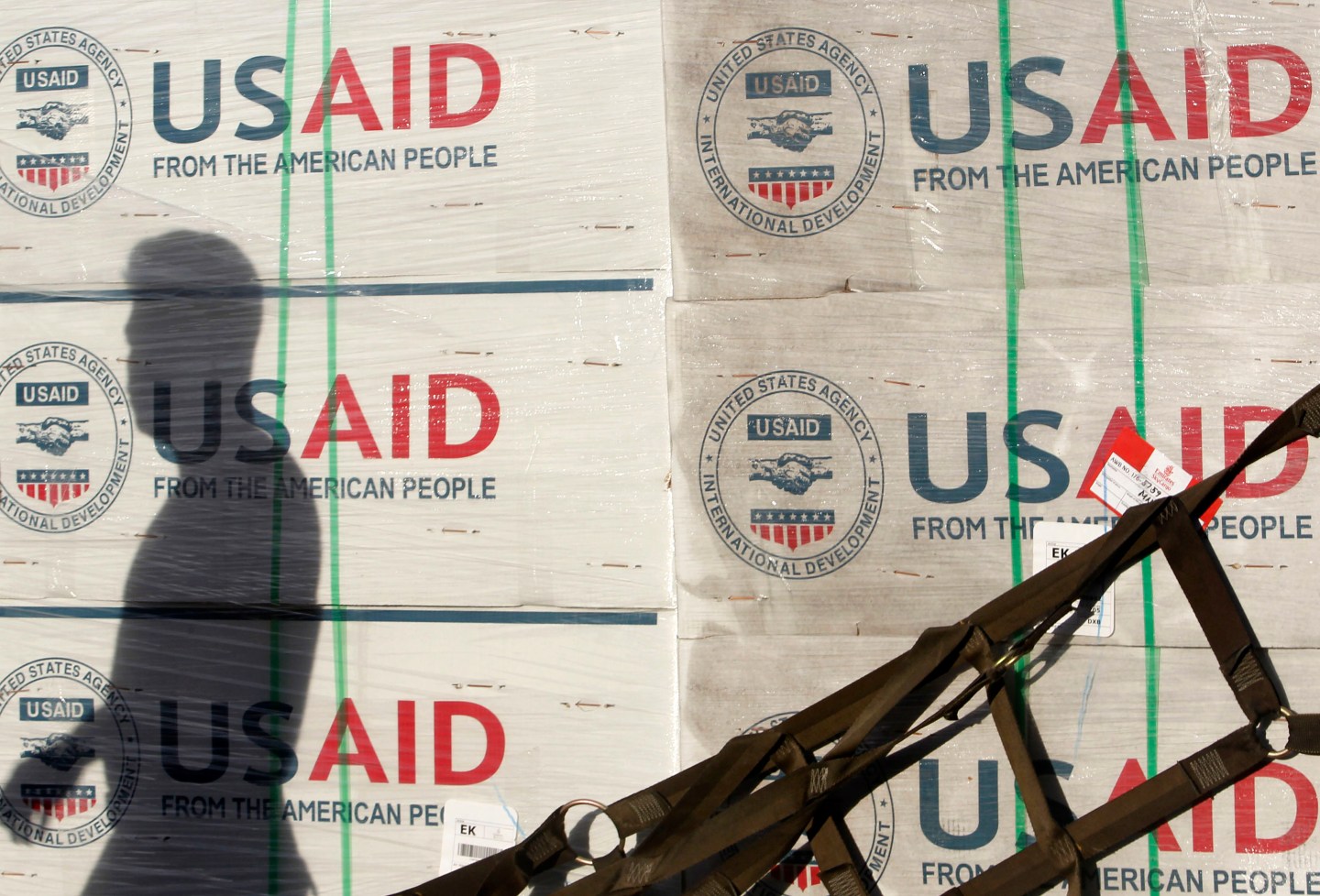 The shadow of a Philippine Army personnel is cast on boxes of relief items from U.S. Agency for International Development (USAID) for the victims of super typhoon Haiyan, at Villamor Air Base in Manila November 13, 2013. The Philippine government has been overwhelmed by the force of the typhoon, which decimated large swathes of Leyte province where local officials have said they feared 10,000 people died, many drowning in a tsunami-like surge of seawater. REUTERS/Cheryl Ravelo (PHILIPPINES - Tags: DISASTER ENVIRONMENT) - RTX15BB2
Photograph by Cheryl Ravelo — Reuters

In April, the U.S. Agency for International Development (USAID), the government agency that dispenses foreign aid, launched the Global Development Lab to bring a Silicon Valley twist to the development world. The goal is to find and test new technology that can end poverty. Last week, Ann Mei Chang was named the first executive director. Chang, who studied computer science at Stanford, has over two decades of tech experience under her belt: she was a senior engineering director at Google, and a manager at Apple. More recently she’s served as senior advisor for women and technology at the U.S. State Department.

Chang discussed women in tech and the differences between the public and private sector with Fortune as well as her plans for the lab. An edited transcript is below.

You worked first for Silicon Valley and now for the government. What’s the transition been like?

The biggest adjustment was going from working in an environment that was 85% male to working in an environment that was 85% female. There were lots of superficial differences, like the hallway conversation. I was used to water cooler conversation that was geeky tech chatter. For example, once when we had a fire drill in the middle of winter, a director ran out without a coat so he programmed his laptop he carried to be warmer.

At the government, there are lots of personal connections. People ask each other about their lives and their families, they look at each other as whole human beings. People are passionate about changing people’s lives and making them better.

What do we need to do to get more women in STEM?

Actually in the US, in the sciences, women make up half of the students going into science. There isn’t a deficit anymore. We want more women in computer science. There are jobs that aren’t being filled and there isn’t enough talent to go around. Meanwhile there are way more people graduating with science degrees than jobs available.

In a keynote address made at a lesbians who tech summit, you mentioned Burma has a much higher rate of women in tech compared to the USA.

There isn’t good data, it’s all anecdotal, but I was in Myanmar earlier this year and met with the Myanmar Computer Federation. They said 60% of computer science majors there are women. In Burma you have to test into different majors, and the most competitive majors mean you have to get higher scores. Women study harder they do much better on tests. In fact, there’s a lower threshold for men to get into computer science, otherwise it would be all women.

So what do we need to do to get more women in tech?

When it comes to computer science? We’ve been working on the issues for 25 years. We see a ton of different programs of different sorts, mentorship, support groups. The results speak for themselves: there’s a downward trend. What we are doing isn’t working.

What could the private and public sector learn from each other?

Well, the first step is for them to learn about each other. They are so culturally different, almost different countries. There aren’t many people who have worked across both sectors. There isn’t enough partnership and collaboration between both.

The private sector has the best talent in the world, it’s the engine that knows how to drive things. It’s very focused on the bottom line, and doesn’t always have a soul in terms of doing the best thing for the world.

The public sector has an incredible reach of influence and community. It can change the playing field systematically. Government is about what’s gauging what’s going on. Non-governmental organizations are the folks that understand best what’s happening on the ground.

What would you like to achieve in your new role?

My goal is to make some dent in the way we do development and figure out how to have a greater impact at a greater scale for less money – to do more with less. There’s so much need and we’re not as effective as we could be at addressing needs.

The most exciting is in the funding space. Traditionally funding is given out years in advance in big chunks. We’re giving out smaller grants of $100,000 to promising ideas to test them out, then based on evidence, scaling up. We want to figure out what works instead of doing a big grant. That’s a great start, but there’s more I’d love to see us do.