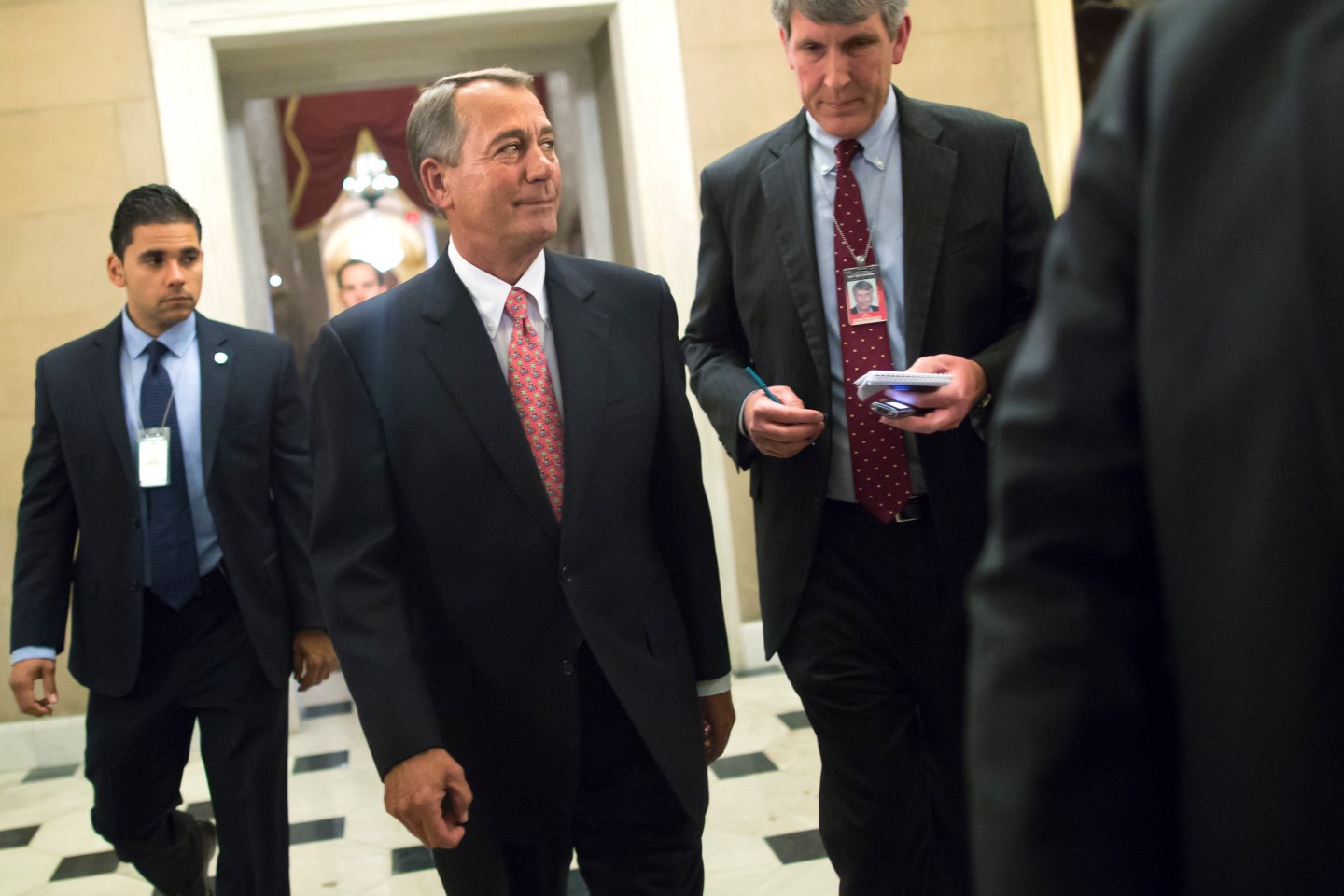 U.S. House Speaker John Boehner (R-OH) (C) walks to his office after passage of a spending bill on the House floor at the U.S. Capitol in Washington December 11, 2014. The U.S. House of Representatives passed a $1.1 trillion spending bill late on Thursday to fund most federal agencies through Sept. 30, the end of the current fiscal year. By a vote of 219-206, the House approved the bill, which would fund the Department of Homeland Security only through February to give Republicans a chance early next year to try to stop President Barack Obama's immigration reforms that are largely carried out by DHS. REUTERS/Jonathan Ernst (UNITED STATES - Tags: POLITICS BUSINESS) - RTR4HPB9
Photograph by Jonathan Ernst — Reuters

Shortly after the 219-206 vote, the House passed a 48-hour extension of funding to keep government offices open while the Senate considers the broader measure.

The spending bill was nearly killed earlier on Thursday by a revolt among Democrats over provisions to roll back part of the Dodd-Frank financial reform law and allow more big money political donations.

But President Barack Obama and his administration waged a last-ditch campaign to persuade Democrats to set aside their objections, arguing that if it failed, the party would get a worse spending deal next year when Republicans take control of the Senate and have a stronger House majority.

The effort to save the bill marked a rare moment of teamwork between Obama and House Speaker John Boehner, who simultaneously worked to persuade conservative Republicans to support it.

In the end, 67 Republicans voted against the measure, largely because it failed to take action to stop Obama’s executive immigration order. But that was offset by 57 Democrats who voted in favor.

The 1,603-page measure, negotiated by Republican and Democratic appropriators and leaders, drew Democrats’ ire when they discovered it would kill planned restrictions on derivatives trading by large banks, allowing them to continue trading swaps and futures in units that benefit from federal deposit insurance and Federal Reserve loans.

If passed by the Senate, the spending bill would provide the Department of Homeland Security with funds through Feb. 27. Republicans intend to deny funding to the agency to carry out Obama’s order allowing millions of undocumented immigrants to stay and work in the United States.