Why are SUVs so popular? It has nothing to do with gas prices 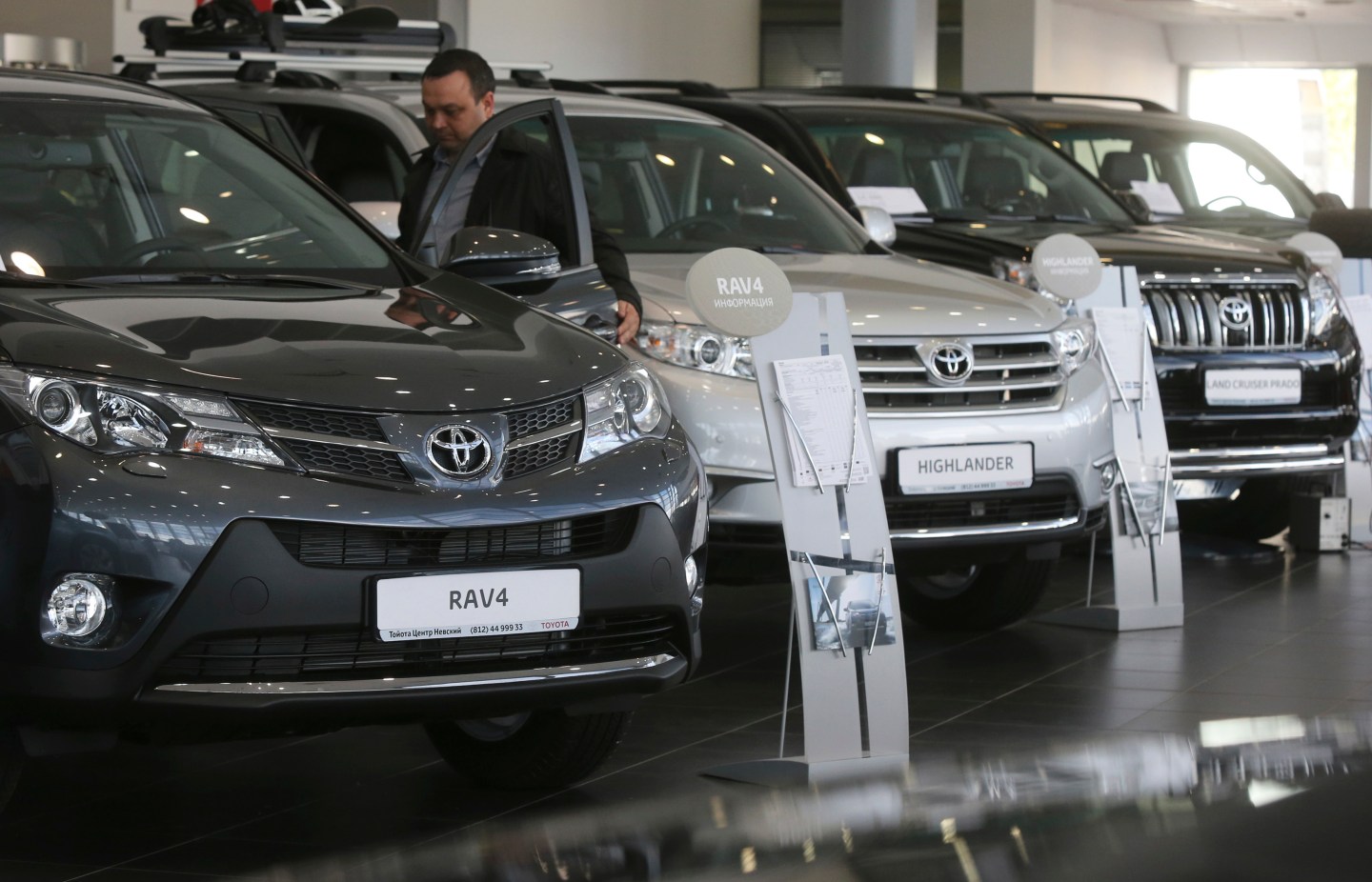 Automobiles are on display at a Toyota car sales and show room in St. Petersburg, September 18, 2013. Toyota Motor Corp will invest around 18 billion yen ($181 million) to expand capacity at its St. Petersburg plant in Russia where it will start assembling its popular RAV4 SUV in 2016, the Japanese carmaker said on Wednesday. While car sales have been declining for six consecutive months in Europe's second biggest market due to an economic slowdown, Toyota has seen sales of the RAV4 rise by 43 percent to 27,000 vehicles in the eight months to August. REUTERS/Alexander Demianchuk (RUSSIA - Tags: BUSINESS TRANSPORT) - RTX13PWO
Photograph by Alexander Demianchuk — Reuters

Sales of sport utility vehicles and full-sized pick ups are gaining, as anyone taking a road trip or looking for a parking spot at the mall can see.

Sedans, meanwhile, are a shrinking part of the car market and losing their status as the ultimate family car. Hybrids? Not looking so good, with Toyota’s Prius — responsible for a huge chunk of all hybrid sales — seeing a nearly 12% drop in sales for 2014.

There’s a perfectly good reason for all this — and it has nothing to do with gas prices.

The average price at the pump could fall to as low as $2.50 by Christmas, after creeping closer to $4.oo for the past several years. But long before this recent downturn on the cost to fill up the tank, Americans were generally opting for the bigger SUV instead of a mid-size sedan or compact car.

“It really has to do with the fact that fuel economy has become more comparable,” said Alec Gutierrez, an analyst with Kelly Blue Book.

Gutierrez noted that the Mazda CX-5 SUV gets around 35 mpg, while the Mazda 3 sedan gets 40 mpg — a far cry from just a few years ago, when the difference in fuel efficiency between an SUV and a sedan was likely closer to 10 miles per gallon.

A lot of manufacturers are struggling to move sedans — to the point where Dave Winslow, Dealertrack’s (TRAK) vice president of digital strategy, thinks that the manufacturers will have to start focusing their sales on specific sedan models just to get them off the lot.

Some of the other historic perceptions about SUVs — that they’re bumpy, loud monsters only suitable for people looking to haul cargo or go off-road — are also increasingly outdated. Most SUVs aren’t built on truck bodies anymore. They can offer just as smooth a ride as a sedan, and some of the same creature comforts — leather seats, climate systems, connected car features — that appeal to people more interested in cup holders than horse power.

So unless you’re serious about the environment and getting the absolute best fuel economy possible, the advantages of the SUV — everything a sedan can offer, plus a higher vantage point for drivers, better capacity for towing and more room — may make it a much more attractive option.

Although falling gas prices could make car shoppers buy more SUVs, Gutierrez thinks that, for the most part, it’s a minor detail. SUVs are already winning the war, and lower fuel costs will only work in their favor.

Falling demand for hybrids is also largely unrelated to falling gas prices. Again, the hybrid market is defined largely by the success or failure of the Prius, which has for some people come to be nearly a ubiquitous term for a hybrid vehicle.

But the Prius is getting a bit long in the tooth, and its due for an update, Gutierrez said. If and when it gets that redesign, we could see the line catch a second wind. In any case, electric cars are somewhat insulated from swings in gas prices. They’re still expensive enough that people aren’t buying them to save at the pump. Rather, they’re buying them to be green, to take advantage of carpool laws in California (electric cars are permitted, no matter the number of occupants), or simply to look cool driving a Tesla (TSLA).

So yes, fuel is down right now. But when the volatile markets start inching up and the pump begins to once again get painful, don’t expect people to suddenly stop buying SUVs — like it or not, they’re here to stay.