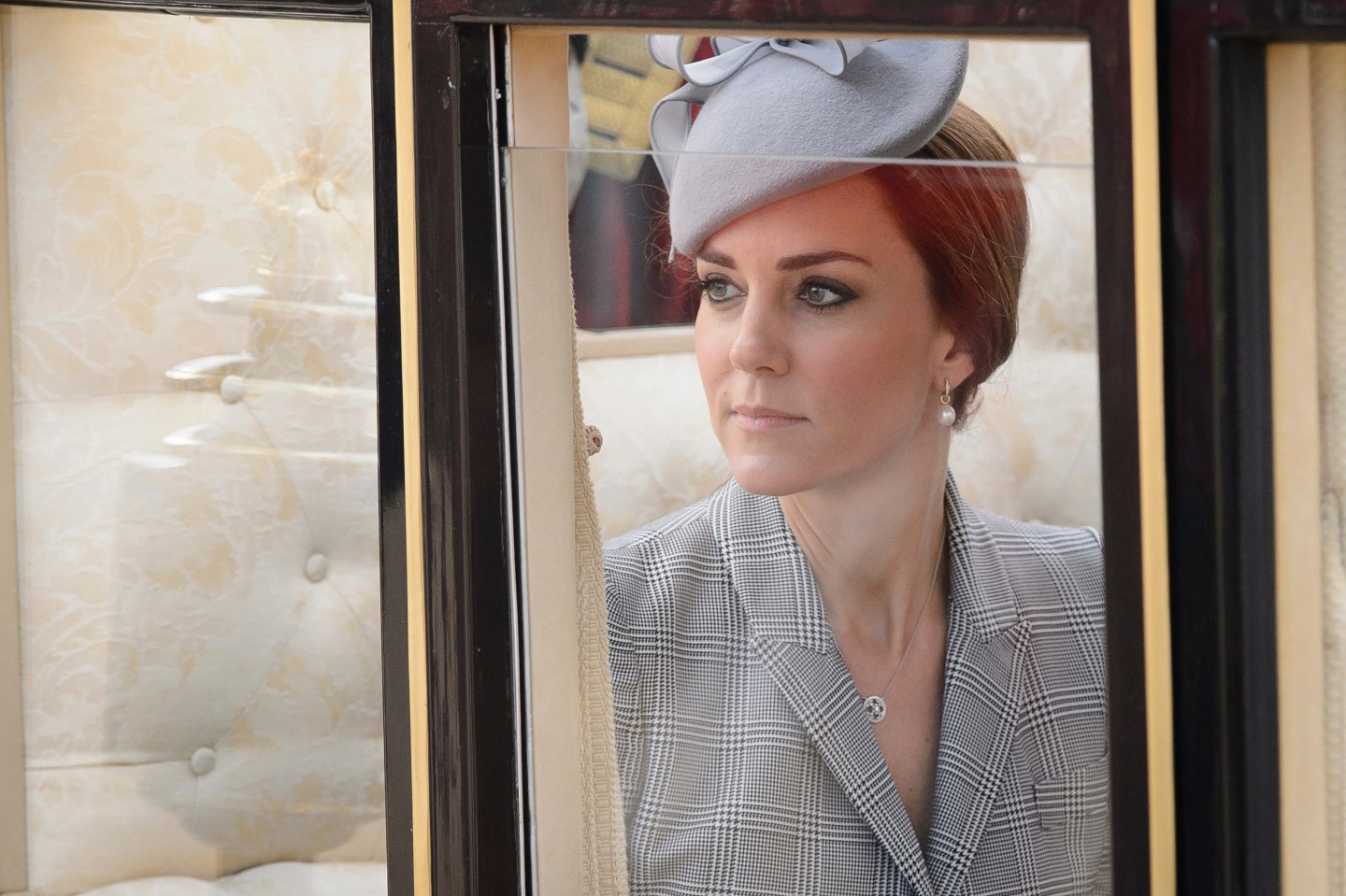 Britain's Catherine, Duchess of Cambridge takes her seat in a State Carriage for the carriage procession to Buckingham Palace, as part of the ceremonial welcome ceremony for Singapore's President Tony Tan at the start of a state visit at Horse Guards Parade in London October 21, 2014. The President of Singapore Tony Tan and his wife Mary Chee started a four day state visit to the Britain on Tuesday. The Duchess, also known as Kate, is pregnant with her second child. REUTERS/Leon Neal/Pool (BRITAIN - Tags: ENTERTAINMENT POLITICS ROYALS TPX IMAGES OF THE DAY) - RTR4B08L
Reuters

With the Duke and Duchess of Cambridge – aka Prince William and Kate Middleton – in New York for a brief visit, the press has breathlessly reported on the British royals’ every move. We learned, for instance, about Duchess Kate’s visit to a Harlem child-development center, while Prince William convened with President Barack Obama.

The hectic schedule made us wonder: how is the Duchess, pregnant with the couple’s second child and in line to one day become Queen, managing her big job?

Below are some key people in Kate Middleton’s entourage. You probably don’t know their names, but they play a crucial, behind-the-scenes role shaping the Duchess’ image.

David Manning, the former British ambassador to the United States, serves as Kate Middleton’s diplomatic adviser and helps her fulfill her royal obligations. Manning has worked in foreign embassies in Israel, Poland, India, Paris and Moscow, and he counsels Middleton as she routinely meets leaders around the globe. Middleton reportedly consults with Manning on issues of foreign and state affairs as well as her charity work.

If there’s anyone with a busier schedule than Kate Middleton, it just might be Rebecca Deacon – the woman in charge of putting that schedule together. If you look closely at photos of Middleton, you might spot Deacon a few steps behind the Duchess. Deacon usually accompanies her to charity events, lunches and all sorts of public appearances.

Though her official title is “Assistant Private Secretary,” she reportedly has become a close friend and trusted adviser to the royals since 2007, when she helped Prince William organize the "Concert for Diana." Deacon, the youngest of three sisters, is the daughter of a female vicar and an army major. In 2010, she became Middleton's private secretary and was crucial in helping arrange the royal wedding. She is said to be accompanying the royal couple on their New York trip.

When Kate Middleton and Prince William went on their Diamond Jubilee South Pacific tour in 2012, her humidity-proof hair made headlines. Amanda Cook Tucker reportedly charged the royals 300 euros a day plus travel costs to make sure the Princess’ hair didn’t frizz on the Southeast Asian trip. The 52-year-old hairdresser is now Middleton's personal hair stylist, but she’s no stranger to the royal family. In fact, Cook Tucker has cut the hair of Prince William and his brother Harry since they were kids. Cook Tucker’s ex-husband owned a salon and worked closely with the Queen’s hairdresser, Charles Martyn. Cook Tucker has accompanied Middleton on numerous tours around the world, and the New York trip is no exception.