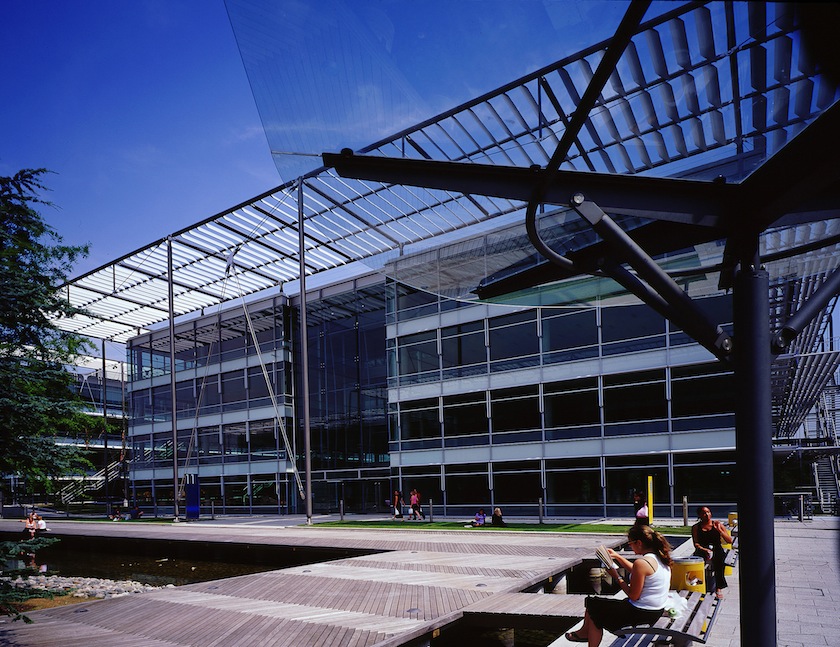 If you happen to work at Microsoft, Google, Credit Suisse, or Unilever, you may be slightly ahead of your time — but only slightly. Those four companies have been featured in a new research report on the future of work.

“Most of the changes we’ll see in the next few years have already started to happen, but they will accelerate,” says Peter Andrew, workplace strategy director for Asia at real estate company CBRE. “The future is already here.”

Why real estate? Simple: Many big commercial clients sign leases for a quarter century or more into the future, so the industry keeps an eye on how work, and the places where we do it, are most likely to evolve. CBRE teamed up with Genesis, a forward-looking real estate developer in China, to conduct in-depth interviews and other research with about 220 expert observers, executives, and office workers around the world, many of them Millennials.

The study turned up some intriguing signs of things to come, like these three:

Artificial intelligence will transform the workplace

The era of automation, which has seen robots replace workers in routine jobs in warehouses and on manufacturing assembly lines, is shifting to “knowledge work.” Among the advantages of teaching computers to gather information, and base decisions on it, is that “humans have biases. For example, people tend to be overly optimistic about a risky course of action if they’ve already invested a lot in it,” Andrew says. “AI eliminates those biases.”

It could also eliminate a lot of jobs — up to 50% of what knowledge workers do now, according to some estimates. Economies worldwide “won’t create new jobs at the same rate as we lose old ones,” says Andrew. “So there will be a difficult period of adjustment.”

Andrew likens this to what’s already happened within the legal profession, where computerization of routine research has slashed the number of new associates law firms need to hire. The upside: AI will free up human talent for more interesting, creative work. Eventually, we’ll all get used to it, Andrew says — especially since many of the tasks AI will take over are the business equivalent of household drudgery: “You never hear anyone complain about the invention of the dishwasher.”

Companies will need a Chief of Work

Most C-suites haven’t added new roles since the Chief Information Officer title took hold about 20 years ago, but CBRE’s research suggests that’s about to change. For one thing, companies today have “human resources, we have IT, and we have a real estate division — all acting separately and, often, unwittingly working against each other,” Andrew says.

A Chief of Work would coordinate all that, with an eye toward building a culture that attracts top talent, or what Andrew calls “the complete experience of working for the company, and how that affects performance.” Finding the most efficient balance between full-time employees and growing armies of independent contractors will be in the Chief of Work’s wheelhouse, too.

Office cubicles will be a relic of the past

For huge swaths of the knowledge-working, laptop- or tablet-toting world, technology has already made a desk in an office obsolete, or at least optional. So, partly in the interest of face-to-face collaboration, companies in CBRE’s study are thinking up ways to make workspaces healthier, more comfortable, and more fun.

One example: Old-school fluorescent lighting could be replaced by LED lights that can easily change color throughout the day to reflect subtle changes in the sky outside, like those lights on many airliners now that simulate dawn, midday, and dusk for long-distance travelers.

Companies will also move toward creating campus-like office buildings, like Chiswick Park in England, with amenities and events that draw people in. Andrew says more big companies around the world are starting to hand empty space, including erstwhile cube farms, over to local artists and musicians for use as studios.

“HR people tell us they see a tremendous increase in employee engagement from art, in particular,” says Martin Chen, chief operating officer of Genesis. “Making a more interesting environment, where you bring more of the broader culture into the space, creates a buzz and an energy that you really can’t replicate in any other way.”