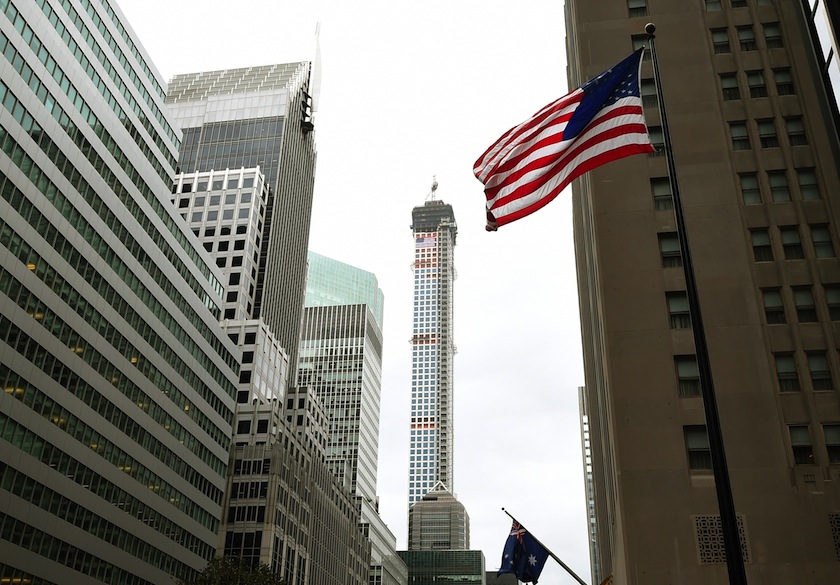 A view of 432 Park Avenue October 15, 2104 the day after it earned the distinction of being the country's tallest residential skyscraper. The 104-unit condominium tower with its 96 stories will officially tower over the rest of the Western Hemisphere topping out at 1,396 feet. The luxury tower will welcome its first residents next year, giving them a breathtaking view stretching from Central Park to the Atlantic Ocean and from Lower Manhattan, where the Freedom Tower is located, to Connecticut. AFP PHOTO / Timothy A. Clary (Photo credit should read TIMOTHY A. CLARY/AFP/Getty Images)
Photograph by Timothy A. Clary—AFP/Getty Images

“There are only two markets, ultraluxury and subsidized housing.” —Rafael Viñoly, architect of 432 Park Avenue

Along a stretch of New York City’s Park Avenue, between 56th and 57th Street, soars a tower so jaw-droppingly altitudinous that King Kong himself would likely think twice before scaling it.

Its rooftop, roughly a quarter of a mile high, makes it the tallest building in New York and the highest residential tower in the western hemisphere.

At 96 stories (1,396 feet), it has no company in the space it occupies atop Manhattan’s skyline. The Empire State Building tops out some 150 feet below that. Absent its spire, the newly built World Financial Center—itself a giant—is 28 feet shorter than this new cathedral to uber-wealth. 432 Park Avenue can be seen from all five boroughs of New York City, from inbound Metro-North trains coming in along the Harlem River, from the Meadowlands in New Jersey, and from several vantage points on Long Island. Its lone silhouette dominates the skyline from every angle. It demands your attention in a way that no residential building ever has.

The most remarkable thing about 432 Park, however, is not just its sheer size. It is the fact that, in a building so tall and imposing, with over 400,000 square feet of usable interior space, there are only 104 units for people to live in. 432 Park Avenue is, in short, a monument to the epic rise of the global super-wealthy. It is the house that historic inequality built.

Our story begins in 2009 with a little-known Los Angeles-based private equity firm called CIM. The firm’s three managing partners, a former Drexel Burnham banker and a pair of former Israeli paratroopers, quietly dropped in on Manhattan’s punch drunk post-financial crisis real estate market with money to spend. CIM moved quickly, writing checks to bail out some of the city’s most prestigious real estate families and firms, as projects were stalling and financing had all but dried up. The outsiders became Manhattan power players overnight.

Strong relationships with investment organizations like Blackstone and Calpers put the west coast-based firm in a position to capitalize on a once-in-a-generation opportunity in a city where the incumbents were largely overleveraged from the prior boom. They acted as the bank behind the resurrection of several high-profile distressed properties, and allowed the original developers to stay involved with each deal as their partners.

By 2011, CIM was everywhere. The economy was slowly improving, the financial firmament was beginning to thaw, and institutional investors were cutting checks again. It is in this recovering environment that a project as ambitious as 432 Park Avenue can even be dreamed of, let alone funded.

Harry Macklowe is one of the real estate industry’s most famous and colorful characters, with a massive portfolio of properties and projects to go along with his outsize personality. No stranger to gambles and calculated risks, Macklowe found himself in a bit of a squeeze in 2008, as the seams of the property market began to tear and the bills from New York’s decade of excess came due. A highly leveraged real estate transaction backed by a $5.8 billion loan from Deutsche Bank kept his name in the news, and his stake in several trophy properties, like the General Motors Building, were said to have been in jeopardy.

CIM stepped into the breach, providing financing for several of Macklowe’s troubled projects, and a partnership was born that would lead to the groundbreaking at 432 Park. By August 2011, their incredible plans for the tower—which would occupy the land where the Macklowe-owned Drake Hotel had been demolished—began to leak onto real estate news sites like Curbed and The New York Observer. The idea of a “fifth-act” survivor like Harry Macklowe partnering with a “mysterious” developer from out of town proved to be an irresistible storyline to the chattering classes.

Within a year, we began to get a sense of what 432 Park Avenue would come to represent. First, we learned that the number of condo units built would be closer to 100 than the originally planned 140. Next came details about the building’s sales efforts. Notably, while Macklowe Properties had kept 432 Park Avenue’s units off of popular broker databases like StreetEasy and the Residential Listing Service (RLS), the firm was going full-throttle in its attempt to court the Russian oligarchy. A kind of traveling sales office was set up at the Ritz-Carlton Hotel on Moscow’s Tverskaya Street, where dozens of billionaires pass through the lobby each day.

By May 2013, Macklowe had announced that the top-floor penthouse was already sold for an astonishing $95 million. Half of the building’s apartments were under contract, with projections of $3 billion in total sales. This February, Manhattan realtor Douglas Elliman was brought on as the exclusive co-sales agent to help move the rest of the units.

It is widely believed that the building will only be one-quarter occupied at all times, even though it will be completely sold out. Keep in mind that these are pied-a-terres that begin at $7 million each and include several full-floor parcels in the $75 million range. More than anything else, this speaks to the insatiable appetite of the world’s greatly expanded billionaire class. Middle Eastern oil magnates, Chinese billionaires, Russian oligarchs, and the Latin American aristocracy all have one thing in common: More money than they know what to do with and a desperation to get as much of it out of their home countries as possible. New York real estate works very well as both a facilitator of this as well as a store of value.

As of this writing, there are currently plans for eight more ultra-luxe towers in and around Manhattan, in various stages of development. The explosion of wealth among ultra high net worth (UNHW) individuals around the world has made all of this possible. According to a new study from UBS and Wealth-X, there are 211,275 people in the world who could be considered ultra high net worth, with assets totaling north of $30 million. The approximate amount of wealth controlled by this group is estimated at just under $30 trillion. And while the number of UHNW people grew by 6% since 2013, their assets grew by 7%.

But these figures obscure an even more important trend taking root among the UHNW rankings: People with over a billion dollars in assets (there are 2,325 of them) saw their wealth increase by 12% year over year, while those at the bottom of the group—the 91,000 people with assets between $30 million and $49 million—realized a comparatively smaller 7% bump in wealth. Those at the top of the top are seeing their fortunes grow twice as fast as those at the bottom of the top. And the number of UHNW individuals who fall in the $750 million to $1 billion category saw their ranks swell by 20% this year to over 1,200 people. The bottom line is that the richer you are, the faster you’re getting even richer.

This explains why a city like New York can build dozens of ultra-luxury residential towers and continue to sell out. In New York alone, it is estimated that there are 8,655 full-time residents who would be categorized as ultra-high net worth, the most of any city in the world. Wealth-X finds that the average UHNW individual owns 2.7 properties and that 8% of their wealth is invested in real estate. Logically speaking, as their wealth grows, so too does their capacity to own and invest in an increasing amount of high-end housing.

This coming spring, the few dozen occupants of 432 Park Avenue, North America’s third-tallest building, will begin to move in. They will furnish their palatial apartments against a global backdrop of deflationary fears, central banks in perpetual crisis mode, massive unemployment, and stubbornly stagnating wage growth for 99% of the world’s population.

In previous generations, when towers of this scale were erected, they were monuments to working. 432 Park, unlike the Chrysler Building, the World Financial Center, and the Empire State Building, is a monument to owning.

In the Medieval era, towers were erected to separate royalty and feudal overlords from the rest of the population during times of plague and suffering. It was an effective barrier, both physical and symbolic. A 1,400-foot skyscraper, in America’s most populous city, in which fewer than 100 people will reside, is perhaps the perfect present-day parallel to such behavior. The ascendance of 432 Park Avenue to its now-dominant place in the skyline says more about the state of our world than a thousand Thomas Pikettys typing on a thousand keyboards ever could.