Can immigration save a struggling, disappearing Japan? 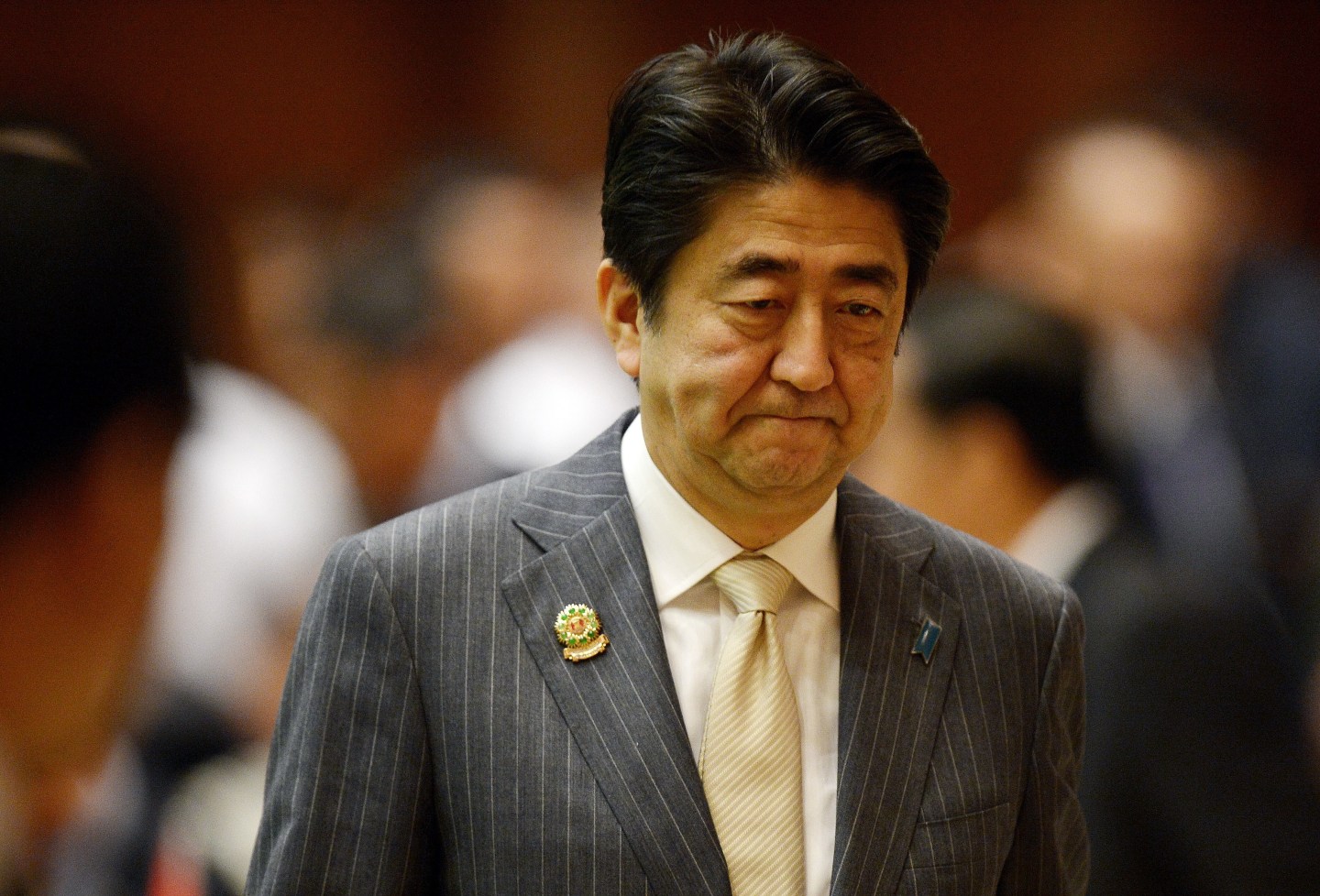 Japanese Prime Minister Shinzo Abe walks back to his seat following a family picture during the ASEAN Plus Three Summit at the Myanmar International Convention Center in Myanmar's capital Naypyidaw on November 13, 2014. The Association of Southeast Asian Nations (ASEAN) and East Asia summits, held in the purpose-built capital of Naypyidaw this week, are the culmination of a year of diplomatic limelight for Myanmar after long decades shunted to the sidelines under its former military rulers. AFP PHOTO / Christophe ARCHAMBAULT (Photo credit should read CHRISTOPHE ARCHAMBAULT/AFP/Getty Images)
Photograph by Christophe Archambault — AFP/Getty Images

Despite a recent ramp up of monetary stimulus, the Japanese economy shrank again for the second straight quarter, and it is now back in recession.

The news blindsided the Japanese political establishment and motivated current Prime Minister Shinzo Abe to call a snap election for next month, which could put in jeopardy his plan to revitalize the nation’s economy, dubbed “Abenomics” by the English-speaking media. As my colleague Geoff Smith has explained, Abenomics involves a short burst of fiscal stimulus, sustained central bank bond-buying, and business deregulation to help Japan’s economy grow, followed by several rounds of sales tax increases to help cut down massive government debt, which currently sits at 238% of GDP—by far the highest ratio in the developed world.

Abe has now backed off his plans to raise Japan’s sales tax again next October, though he is hoping to hold onto the two-thirds majority coalition that has enabled him to act boldly and decisively in his economic reforms. But is there any reason to be confident in these reforms after the performance of Japan’s economy this year?

Carl Weinberg, chief economist at High Frequency Economics, says no. He argues that Japan is in a depression, driven primarily by its quickly shrinking population. Government funds are tied up taking care of the the nation’s elderly, and there’s no room for serious stimulus to drag it out of this slump. To illustrate the fultility of Abenomics, Weinberg provides the following chart, and an explanation:

One way to estimate an economy’s potential level of GDP is to connect the peaks over two business cycles with a straight line … the thinking is that an economy shows us the maximum amounts of goods and services it can produce at the peak of each business cycle…. We hypothesize that the fiscal and monetary excesses of Abenomics briefly–for five quarters beginning in the first quarter of 2013–pushed actual GDP above its potential level…. With the end of Abenomics spending, GDP is now declining.

A shrinking population translates to fewer workers, fewer consumers, and less overall demand, all while a growing elderly population puts strains on government budgets. How could this not lead to a shrinking economy, falling prices, and higher government debt? As Weinberg writes, “Japan needs more people and less debt.” Nothing in the current program, besides tax increases that have already been scrapped, seriously addressed either of these problems.

Of course, if people are the problem, the world is teeming with immigrants who would love to move to a country with a developed economy like Japan. So why don’t the Japanese just let these folks in? Simply put, there is a deep cultural aversion to any immigration whatsoever. Here in the U.S., the debate is centered mostly around keeping legal permanent immigration at 675,000 people per year, or allowing more people to enter the country. Despite the fact that demographers estimate that Japan’s population will shrink by 19 million people by 2050 and the ratio of the working to nonworking population will fall to 1:1 by 2055, it doesn’t allow any permanent, legal immigration whatsoever. The result of this policy is that just 1.63% of the Japanese population is foreign-born, one of the lowest percentages in the world. (In the U.S., 14.3% of the population is made up of immigrants.).

Japanese policy makers have made moves to relax immigration restrictions, at least slightly, in recent years, by allowing a few thousands healthcare workers from select countries, like Indonesia, the Philippines, and Vietnam, to enter the country and work towards long-term residency status. But the restrictions placed on these workers are strict: Their previous healthcare training is not recognized in Japan and the workers must learn Japanese within three or four years or they are sent back home. Not once has this program brought in the maximum allowed number of workers.

Following the financial crisis, Japan has only become less inclined to welcome foreign workers, despite the obvious need. Just as in the U.S., some Japanese people believe that allowing in immigrant workers is bad for those already in Japan. As Nobuyuki Yumi of Japan’s Ministry of Health, Labour and Welfare told the Asian News Network in 2012:

I consider the fields of nursing and health care to be important ones that generate jobs in Japan. Now the Japanese, especially the younger generation, are struggling to find jobs…. Former nurses who have quit can be encouraged to return to work instead.

And this attitude is a reflection of broader public opinion in Japan. According to the Japan Times:

Opinion polls show the Japanese public to be increasingly worried about the effects of the declining population. However, when asked what should be done to secure the labor supply, the top two answers in an April Yomiuri poll were to increase the rate of working women and encourage more elderly to work. Only 37 percent said more foreign workers should be accepted, and only 10 percent of those said manual workers should be brought in. The bottom line is that the no-immigration principle continues to be broadly supported by the Japanese public.

Unemployment is always an issue in capitalist countries. Even during boom times, we all wish there were more jobs. But macroeconomists are in near-unanimous agreement that a growing population is an essential ingredient for a growing economy, especially in developed countries where social insurance programs need for there to be enough young workers to take care of the old.

Immigration is a contentious issue in the U.S., but Japan’s failure to see it as an obvious solution to its problems puts into sharp relief how much more accepting of immigrants the United States is compared to its developed peers. It should also serve as a warning to the rest of the developed world that cultural insularity can come at a very steep price.