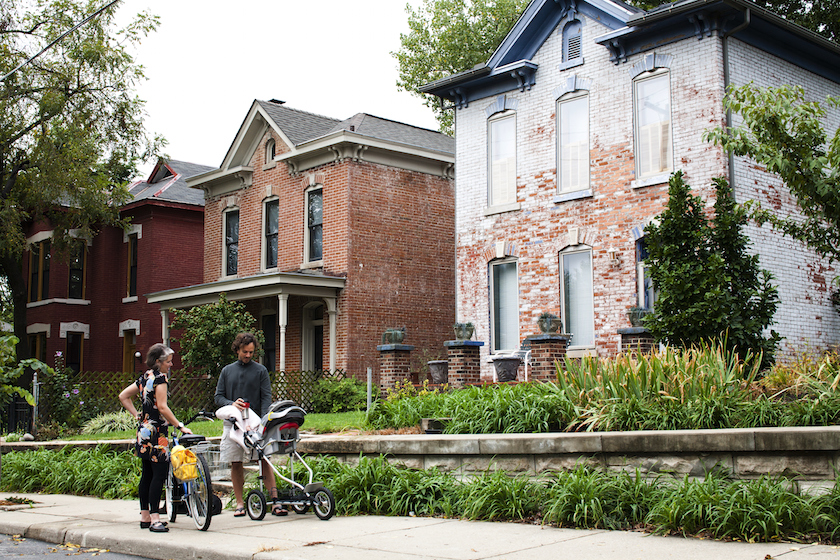 A woman and a man talk on the sidewalk in a transitional neighborhood.
Photograph by Michael Hanson—National Geographic Creative/Getty Images

The average price of a home is rising, but middle-class incomes aren’t.

That’s one conclusion that can be drawn from a report published Tuesday by Jed Kolko, chief economist at Trulia, which showed that only 59% of homes for sale in America are affordable for the middle class. That’s down from 61% a year ago, suggesting that the housing affordability crisis in America is only getting worse as real estate continues to appreciate across the country.

Kolko determined affordability on a market-by-market basis, taking the median income in a particular metro area and then comparing that to the average for-sale prices of listed homes in that area. If someone making the median income in that area would be able to afford payments on the home (including insurance, taxes, and mortgage payments) by spending 31% of their monthly income or less, Kolko labeled that home affordable for the middle class.

The lack of affordable homes is more pronounced in some of the nation’s most economically vibrant cities, like New York and San Francisco, where a surge in demand, political resistance to increased density, and environmental constraints have conspired to make owning a home nearly impossible for any but the very wealthy. Other cities that fall on Kolko’s least affordable list include Los Angeles, Honolulu, Austin, and Miami.

But there are many cities across America where real estate is generally quite affordable. Here are the 10 most affordable places for aspiring middle-class homeowners:

Unfortunately, few of these very affordable areas are the parts of the country in which the economy is booming. In fact, most of these cities are affordable for the middle class even though the median worker’s income in these areas is significantly lower than the average for the country. Take Detroit, where the median worker only makes 70% the national average and where the unemployment rate is 28% higher than the rest of the country. Not exactly the kind of place where an upwardly mobile, middle-class family could imagine themselves buying a home and prospering, at least not yet.

In fact, in every city (except two) on Kolko’s list of the most affordable, the median worker makes 89% or less than the average worker country-wide. The picture Kolko’s data paints, then, is a country divided between the economically strong cities, which are overcrowded and unwilling or unable to expand, and the rest of the country, which is struggling to create opportunity for its citizens.

There are those two exceptions, Kansas City and Camden, N.J., where the average worker makes 96% and 119% the national average, respectively. So middle-class folks who are looking for stable regional economies and affordable housing might look to those two areas to buy a home.