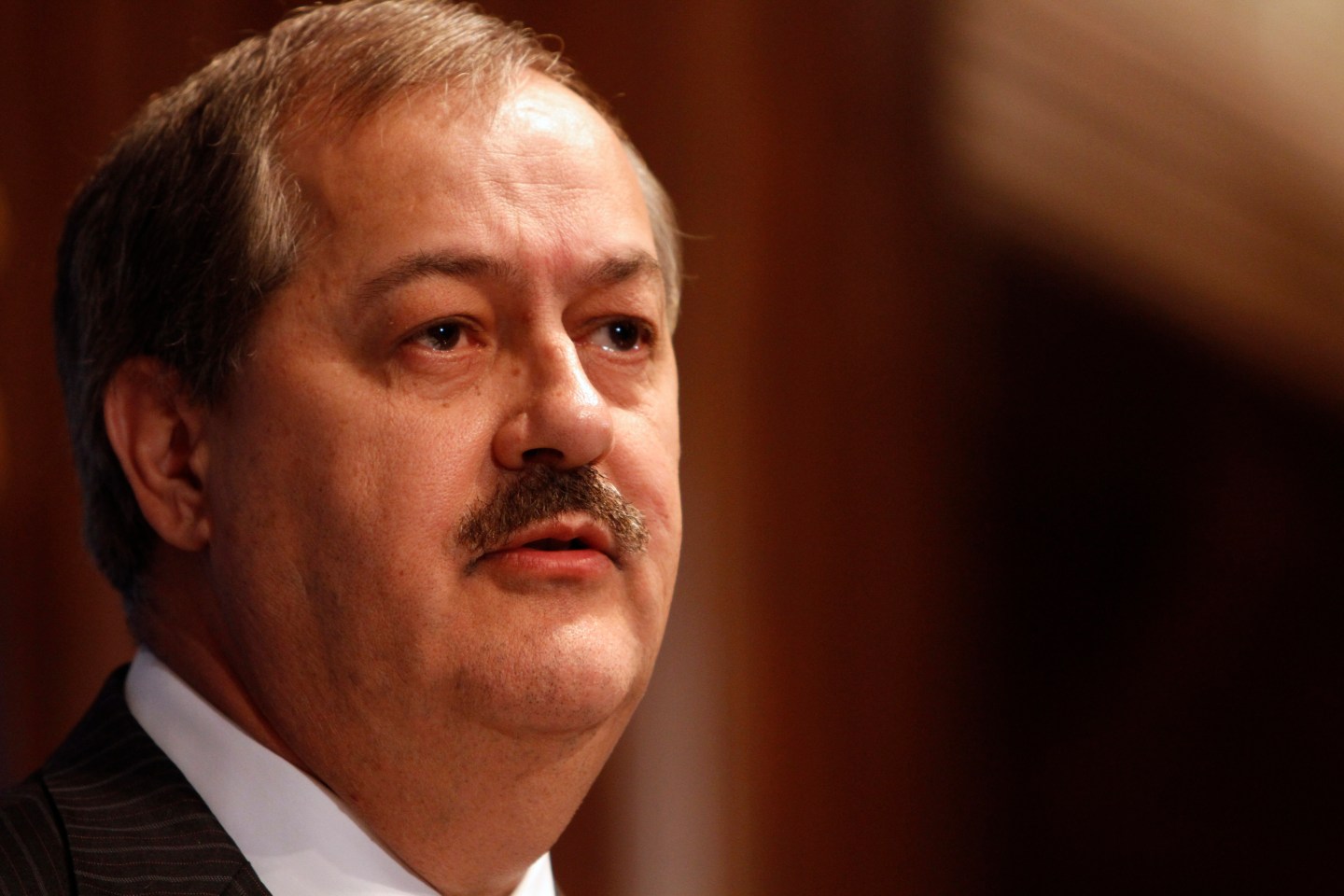 FILE - In this July 22, 2010 photo, Chairman and chief executive officer of Massey Energy Company Don Blankenship speaks at the National Press Club in Washington. Blankenship announced Friday, Dec. 3, 2010 that he will retire at the end of the month, finishing a nearly 30-year career that included big profits for the company but also fights with labor and federal regulators and a recent mine explosion that killed 29 people. The company's board of directors named current president Baxter F. Phillips Jr. as Blakenship's successor, effective Friday. Blankenship's retirement date is Dec. 31. (AP Photo/Jacquelyn Martin)
Photograph by Jacquelyn Martin — AP

With his Snidely Whiplash mustache and his heavy jowls, Don Blankenship has always looked the part of the villainous coal tycoon. Now he may get the chance to play that role in federal prison. The former Massey Energy CEO, for decades one of the most powerful men in West Virginia, was indicted last week on four counts related to the Upper Big Branch coal mine explosion, which killed 29 miners in April 2010. He will be arraigned later this week.

Through two government and two independent investigations since the disaster, Blankenship has denied all charges and scoffed at the notion that he might be held criminally responsible, even though two of his former subordinates have pled guilty and been sentenced to prison. Blankenship “conspired to commit and cause routine, willful violations of mandatory federal mine safety and health standards” at the mine, the indictment charges, “in order to produce more coal, avoid the costs of following safety laws, and make more money.” He is also charged with lying to the SEC and to Massey investors in the months after the accident.

Blankenship resigned from Massey in late 2010, weeks before the company was sold to Alpha Resources. His trial promises to provide more evidence of the unsafe practices of the coal industry in Appalachia, and, perhaps, to bring a measure of consolation to the families of the mend who died at Upper Big Branch. More than that, it represents the first time the chief executive of a major coal company has faced criminal charges for safety violations committed at his mine.

Less than a century ago, in the so called “Coal Wars,” federal troops were called out to quell unrest among miners protesting, often violently, against unsafe and unhealthy conditions in the coal mines. Now a coal CEO faces more than 30 years in prison for allegedly perpetuating, and attempting to conceal, those conditions.

The mansion that Blankenship used to entertain his corporate friends sits on a ridge overlooking Williamson, W.Va. You can see its turrets and porticoes from the mostly vacant downtown of Williamson, which, like many coal towns in the region, has been devastated by the steep decline of the Appalachian coal industry. When I visited Williamson in September 2013, while reporting for my forthcoming book on the future of the coal industry, a local activist and organizer named Eric Mathis showed me the community garden that he and others have created to try and revive the town’s moribund economy.

A graduate of Appalachian State, Mathis began working in economic development after being recruited to assist in a class action lawsuit against Blankenship and his company, Massey Energy. The suit was over water disposal practices at Massey’s mines—practices that also come up in the federal indictment.

“They started dumping slurry into underground mines, pulling out the particulates and putting them in there,” says Mathis. “It was just a toxic soup that they dumped into the drinking water in Mingo County. They’d warned Blankenship it was happening and he didn’t give a shit. At the same time he built a pipeline to his house, knowing all his neighbors were drinking poison, to ensure that he had clean water. That’s who he is.”

That lawsuit was filed in 2006, just as the regional coal industry was arriving at the edge of the precipice off which it has since plunged. Attitudes toward Massey and its combative CEO were mixed—and feelings about the industry remain that way. On the one hand, many people across Appalachia deplore the way the companies have despoiled the land through drastic mining techniques—particularly mountaintop removal—and resent the callous attitudes of company officials toward miners’ health and safety. On the other, a lot of families depend on paychecks from the coal mines, and resent any policies that might limit the industry’s prospects.

The recent re-election campaign of Sen. Mitch McConnell, the Kentucky Republican, was essentially a contest to see who could support coal more fervently: McConnell or his opponent, Alison Lundergan Grimes. After five terms in Washington, McConnell can hardly boast of passionate support back home in Kentucky. But Grimes could never quite convince the voters she was truly a Friend of Coal. This past Friday, McConnell said in an interview that President Obama’s treatment of the coal industry was an “outrage,” and vowed to fight back. “So he had a war on coal and, honestly, I’m going to go to war with him over coal,” said McConnell.

Blankenship himself is an Appalachian by birth and by outlook. Born in Stopover, Ky., he grew up in Delorme, a village on the Tug River, West Virginia’s southwest border with Kentucky. A graduate of Marshall University, he got his start as an office manager for Rawl Sales & Processing, a Massey subsidiary, and rose through the ranks, becoming CEO in 2000. In a state where coal tycoons are accorded near-royal status, Blankenship managed to alienate many through his fierce anti-union stands and his arrogant dismissals of safety regulations. And he has been accused over the years of buying influence with officials, particularly state Supreme Court justices, with possible oversight of the coal industry.

In testimony during a lawsuit over fatalities at Massey’s Aracoma mine, in 2008, Blankenship responded when accused on the stand of being indifferent to the safety of his miners: “It is just the opposite,” Blankenship said, as quoted on Bloomberg News. “As an accountant, I know that safety is an important cost control. So even if I were so calloused, which I am not, as to believe that safety should be sacrificed for production, I would understand that it doesn’t make any sense because the accidents and so forth cause you to have more costs.”

The current indictment contains many such instances of plain speaking. Officials at mine entrances had code words to warn miners underground of the arrival of mine inspectors, and routinely covered up safety violations, per orders from Blankenship. Blankenship often berated his managers, in writing, pushing them to avoid spending on safety measures and keep up production. “Please be reminded that your core job is to make money. To do this, you have to run coal at a low cost, ship your orders, and control your quality,” reads one such missive. In another message he told managers to ignore proper ventilation requirements for underground shafts where miners were working: “We’ll worry about ventilation or other issues at another time. Now is not the time.”

“You have a kid to feed,” Blankenship told one employee, referred to in the indictment as “the Known UBB [Upper Big Branch] Executive,” in a blistering handwritten memo on March 10, 2009 – a year before the disaster. “Do your job.”

Three days later came another handwritten note: “Pitiful. You need to get focused. … I could Krushchev you. Do you understand?”

In retirement, Blankenship spends his time trumpeting his free market, anti-environmental, climate-change-denial views on his web site, titled “American Competitionist,” and in emails to his followers. I’m on his mailing list. He uses the website and email blasts to rant against the forces he believes are destroying America: the EPA, the Mine Safety & Health Administration, and climate-change scientists. He cordially turned down my request for an interview for the book. After the indictment was handed down on Nov. 13, he was characteristically defiant: “Don Blankenship has been a tireless advocate for mine safety,” the lawyer, William W. Taylor III, said in a statement. “His outspoken criticism of powerful bureaucrats has earned this indictment. He will not yield to their effort to silence him.”

This time, however, it’s not powerful bureaucrats who have accused Blankenship: it’s a federal grand jury of ordinary citizens in Charleston, W.Va., in the heart of coal country. Reactions from the families of the miners killed at Upper Big Branch, from politicians, and from executives at Alpha Resources has been swift and sharp. In the justice system, said Sen. Jay Rockefeller of West Virginia, in a statement, Blankenship “will be treated far fairer and with more dignity than he ever treated the miners he employed. And frankly,” Rockefeller added, “it’s far more than he deserves.”

Blankenship is an outlier within the coal industry, which has brought modern technology and enhanced safety practices to the mines over the last 10 years. Even underground mining is an anachronism today, when strip mines and “mountaintop removal” are more common and more profitable. But for an industry in decline, the sight of a former powerful executive being hauled into court over his company’s mining operations is chilling. Lawyers for coal mining companies across the country are at this moment combing old memos and emails for incriminating evidence.

Blankenship’s first day in court will be a hearing in Beckley, W.Va., on Nov. 20.