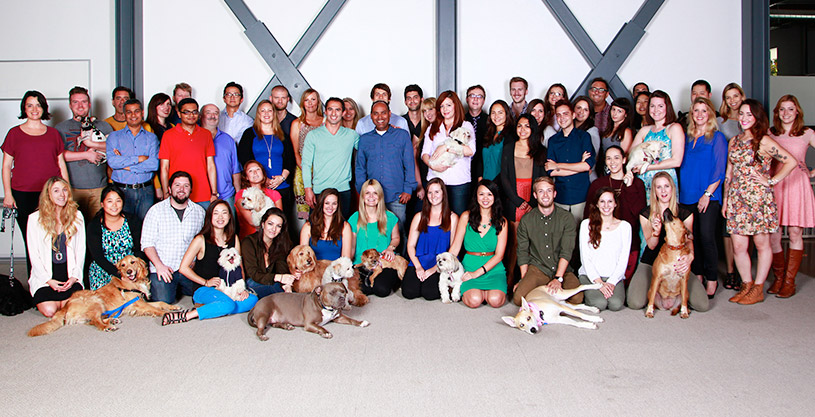 DogVacay staff and their dogs in 2014.
Courtesy: DogVacay

On any given day, 20 to 30 dogs run free around DogVacay’s Santa Monica office. But according to CEO Aaron Hirschhorn, it’s not total chaos. “They very quickly establish their pack hierarchy,” he says. “There are a couple who are kind of in charge. Everyone else gets in line. They’re really well behaved.”

Today, the company announces it has raised $25M in a Series B1 round of funding led by Omers Ventures, the venture capital arm of Ontario Municipal Employees Retirement System. GSV Capital, as well as existing investors Science Inc., First Round Capital, Benchmark, Foundation Capital, and DAG Ventures participated. DogVacay has raised a total of $47 million in venture funding.

Founded in 2012, DogVacay’s service has been called “Airbnb for dogs.” Dogbnb, even. Similar to the room-rental marketplace, DogVacay allows dog owners in 3,000 cities to hire one of its 20,000 dog-sitters for their pets. It grew out of a bad experience Hirschhorn had sending his two dogs to a kennel. “It was a ten-day trip, the kennel bill was $1,400, and one dog was hiding under my desk for three days afterwards,” he says. “It was a bad experience for us and for the dogs, and it was expensive.”

Seeing an opportunity, Hirschhorn and his wife started an overnight dog-sitting business on Craigslist. It quickly took off, serving 100 clients in 2011. It became his wife’s full-time job. Having spent some time in the startup scene at two venture capital firms, Hirschhorn saw the startup potential, and DogVacay was born. The company just crossed 1 million nights booked in October, doubling its volume in just five months. (The company would not disclose revenue.) DogVacay has one venture-backed competitor: Seattle-based Rover.com operates in several thousand cities and has raised $25.9 million in funding from investors including PetCo.

Like any disruptive marketplace, there are plenty of potential snags. Airbnb has tussled with regulators in New York and San Francisco. Hirschhorn says the zoning laws vary by state and even by street in some cities, but since its dog-sitters only watch three or fewer dogs per session, they don’t need to be licensed kennel operators. DogVacay carefully screens its dog-watchers, which have an average rating of 4.96 stars out of five on the site. More than 100,000 people have applied to be dog-sitters, but DogVacay has only accepted 20,000, all of which go through interviews, training, and reference checks before joining.

Still, there will be incidents. Recently, a dog under DogVacay’s watch ate some socks and underwear, which got caught in his intestines and required emergency surgery. This is why half of the company’s 70-person team is dedicated to 24-hour customer care, Hirshhorn says, adding that DogVacay has robust insurance that covers emergencies.

The company plans to use the new funds to expand internationally, as it currently only operates in the U.S. and Canada. Omers will be helpful in this cause, says Damien Steel, a director at Omers. “We have offices all around the world, we are a large, large organization, and we’re in a unique position to leverage that,” he says. “I’m looking forward to helping them break into Europe and other markets.” Omers has backed 20 late-state startups like Hootsuite and Wattpad in the last three years, 15 of which the firm led. But DogVacay is its first U.S. investment.

DogVacay also hopes to expand into other dog-related services, such as boarding, day care, walking ,training and grooming. “The pet care market is over $12 billion [a year], and completely fragmented,” Hirshhorn says. Since DogVacay doesn’t have the fixed overhead cost of real estate, DogVacay can expand faster, at a cheaper price, with quality care that’s consistent thanks to DogVacay’s training, he says.