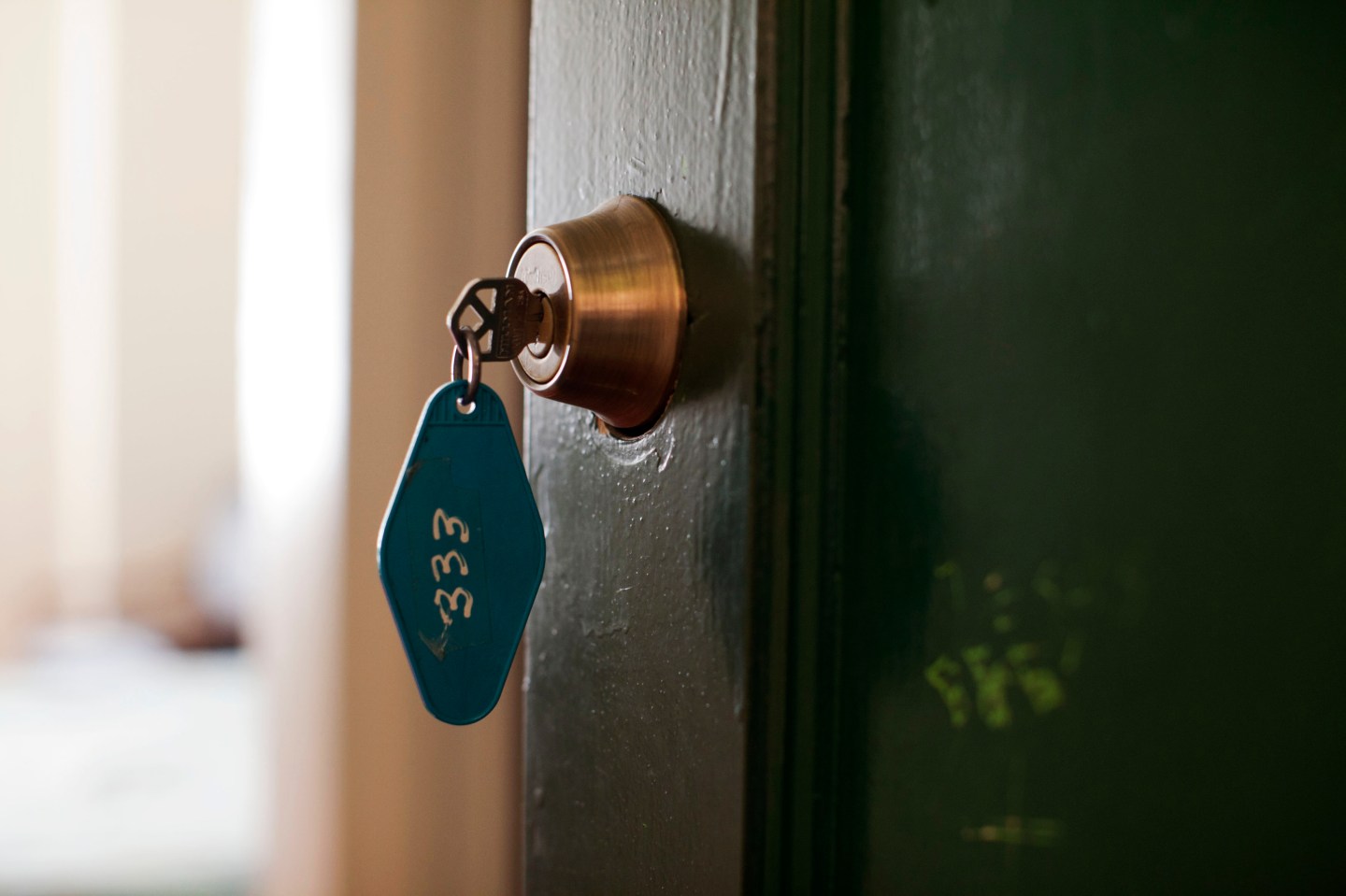 A key hangs in the lock at room 333, one of the most haunted rooms of the Gadsden Hotel in Douglas, Arizona, October 29, 2012. While many hotels in the United States claim ghosts, staff and guests at the Gadsden have recorded scores of supernatural encounters from the top floor right down to the maze-like basement - not just at Halloween, but year round. Picture taken October 29, 2012. REUTERS/Samantha Sais (UNITED STATES - Tags: SOCIETY ENTERTAINMENT) - RTR39TBL
Photograph by Samantha Sais — Reuters

Imagine walking into your hotel room without ever picking up a key at the front desk.

On Monday, both Hilton and Starwood hotels, the parent of Sheraton, Westin and “W,” unveiled plans to install keyless systems that would let guests use smartphones to get into their rooms.

The idea is keep guests from wasting time while waiting in line to pick up their keys. Of course, forgoing the traditional check-ins also saves hotels money by eliminating the need for as many employees to handle the front desk.

“It will make things easier for guests,”says Ryan Meliker, a hotel industry analyst with the investment bank MLV & Co. “It will lower expenses for hotel operators, and make technology more seamless.”

He continued: “We’re seeing a time when hotels are doing what they can to lower expenses. We’re probably going to be seeing more keyless technology.”

Starwood is going live with smartphone keys on Wednesday in ten hotels in Beijing, Hong Kong, New York, Los Angeles, and Doha. Meanwhile, Hilton plans to go keyless in 600,000 rooms in 2015 and then expand the following year to its other hotel brands including DoubleTree, Hampton Inn, Embassy Suites, and Waldorf Astoria, according to the Associated Press.

At Starwood, guests with a reservation must download an app and opt into the keyless program. Twenty-four hours before their stay, guests receive a digital key on their phone. Upon arrival at the hotel, they can go straight to their room and hold their phone next to the door handle, which opens the lock via Bluetooth.

SPG Keyless, short for Starwood preferred guest, evolved from a system used by the hotel chain that let guests bypass check-in and access their rooms using a keycard.

“Not only does SPG Keyless alleviate a perennial pain point for travelers, but it also transforms the first interaction with our guests from one that is transactional to something more personal,” Frits van Paasschen, Starwood’s chief executive, said in a statement.

Chris Holdren, senior vice president of SPG and digital, followed up in an email to say: “Starwood knows this is a small investment for what will be a big change. We are prepared to make a significant contribution to see that this rolls out globally by 2015.”

Other hotels like Marriott and Intercontinental are not testing keyless, but they do allow guests to check-in through their smartphones, according to the Associated Press.

Analyst Meliker postulates that keyless will be widely-adopted by business hotels, eventually. “This is business travel in general. People that want to get in and get out,” he said. “I think we’ll be seeing it more at Hampton Inn, than at luxury places.”

While an app may cause security concerns, Avivah Litan of Gartner research told Computer World that keyless isn’t necessarily more of a security risk than a keycard. “Data on the physical card can be copied and written onto another card,” she said.

As for people who are prone to losing their smartphones? You can probably get an old fashion keycard made, but navigating life without your phone is going to become harder and harder.