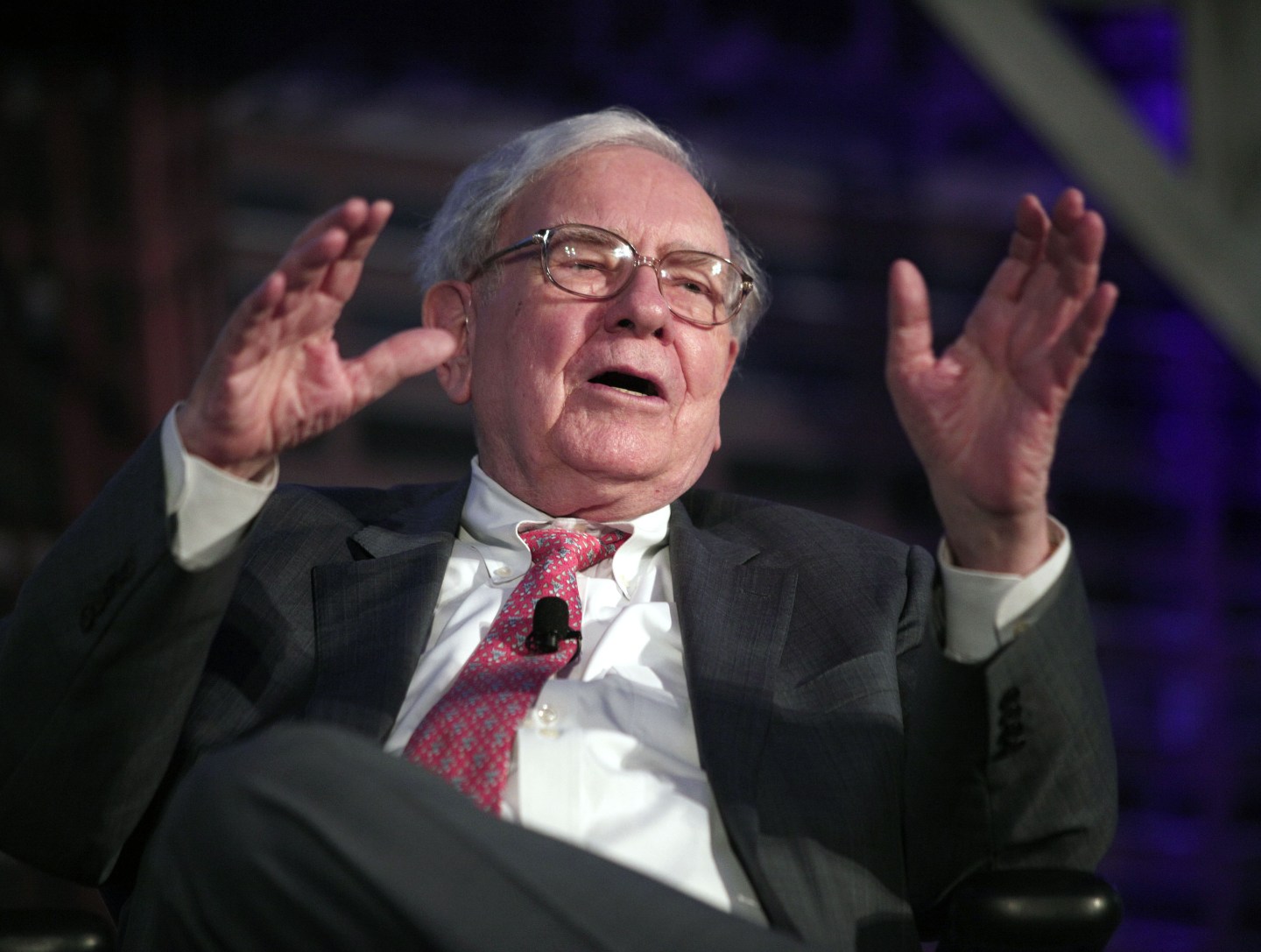 DETROIT, MI - SEPTEMBER 18: Billionaire investor Warren Buffett speaks at an event called, "Detroit Homecoming" September 18, 2014 in Detroit, Michigan. The purpose of the invitation-only event of Detroit expatriats is to give the group a chance to reconnect, reinvest and reinvent with their hometown. The topic of Buffet's conversation was, "Why I'm Bullish on Detroit." (Photo by Bill Pugliano/Getty Images)
Photograph by Bill Pugliano—Getty Images

These days, the thing to say if you want to sound smart about Warren Buffett is that the Oracle of Omaha’s crystal ball has cracked. In mid-October, headlines blared that Buffett had lost $2 billion in just two days on Coke and IBM (IBM). Nevermind that Buffett has said those investements are long-term holdings, that he hasn’t sold a share of either company’s stock, and that he would prefer it if IBM’s shares stayed cheap, for now. It seemed to reinforce the notion that the world’s great stock picker had lost it.

Last year, the book value of Buffett’s Berkshire Hathaway badly trailed the S&P 500, increasing less than the broad market index over the past five years for the first time in history. Buffett has acknowledged that his hand picked successors Todd Combs and Ted Weschler, have done better in recent years than he has. (Combs’ and Weschler’s market beating performance was the subject of a recent Fortune story.) Earlier this year, The New York Times highlighted a recent study that found Buffett’s ability to do better than the market has mostly disappeared.


And yet, some of Buffett’s best investments of his entire career have been ones he has made in the past few years. What’s more, if Buffett has lost it, someone forgot to tell the market. Share of Berkshire (BRK-A) are way up, have more than doubled in the past five years. That’s generally a reflection of how well investors think Berkshire’s stock market portfolio, still over 85% managed by Buffett and his long-time partner Charlie Munger, as well as the businesses they have bought over the years—including railroad company Burlington Northern, See’s Candies, and dozens of others—are doing. If Buffett has hit a lull, that’s only because the comparison he has built up for himself over the years is tough to top.

Here are Buffett’s greatest investments of all time, ranked by annual average rate of return. It’s a testament to how successful Buffett has been. Even some of Buffett’s best-known investment successes, like Coke (KO), Capital Cities/ABC, Gillette, and auto insurance company Geico, were not good enough to make the list. Here are the ones that did:

TIANJIN, CHINA - FEBRUARY 08: (CHINA OUT) A general view of storage tanks at a PetroChina commercial crude oil depot on February 8, 2012 in Tianjin, China. The International Monetary Fund (IMF) has lowered its forecast for China's 2012 economic growth to 8.25 percent from the previous 9 percent.

Buffett is known for his "buy what you know" investment mantra, and his consistent praise for America. In last year's annual letter to Berkshire shareholders, Buffett wrote, "America's best days lie ahead." Nonetheless, some of his greatest investments, particularly his recent ones, have been in China. In 2002 and 2003, Berkshire bought 1.3% of China's dominant oil company PetroChina (PTR) for $488 million. Some questioned the investment. PetroChina's oil fields looked tapped out, and the company, with 400,000 employees, was loaded down with costs. At the time, PetroChina had a market cap of $37 billion. Buffett suspected it was worth $100 billion. Buffett was low. Rising oil prices and new discoveries caused PetroChina's shares to soar. By the time Berkshire sold in 2007, PetroChina's market cap had reached $275 billion, and Berkshire reaped a $3.6 billion gain.

A visitor looks at BYD E6 electric car on display at the New Energy Auto Expo in Nanjing, Jiangsu province March 22, 2014. Three of China's biggest cities are helping consumers pay for a range of electric cars, heeding calls to encourage the sale of green vehicles that the government sees helping tackle pollution.

One of Buffett's best recent investments came as a suggestion from his long-time lieutenant Charlie Munger. In 2008, Munger sold Buffett on Chinese car battery company BYD by saying that its CEO, Wang Chuan-Fu, was quite obviously a descendant of both Thomas Edison and Jack Welch. He solves problems like Edison and gets things done like Welch, Munger said. "I've never seen anything like it in my life."

In late 2008, Berkshire bought 10% of BYD for $230 million. Munger has since said that he thinks the adoption of electric cars will take longer than many think, but he said he has plenty of faith in Chuan-Fu, and he and Buffett have been rewarded for that. Six years later, that 10% stake in BYD, which Berkshire still holds, is now worth nearly $1.8 billion.

A Freddie Mac sign hangs behind employee John Estrada as he works in the borrower contact unit area at Freddie headquarters in McLean, Va., on April 8, 2014.

Buffett had plenty of conviction when, in 1988, he invested $108 million in Freddie Mac, the giant government-backed mortgage insurance firm, at a split-adjusted $4 a share. Shortly after making the investment, he talked it up in the pages of Fortune magazine. Ten years later, Freddie Mac's shares traded at $70. But perhaps the most notable thing about Buffett's investment in Freddie is not how well it did, but when he sold. In 2000, Buffett testified that he had a series of meetings with Freddie Mac's CEO at the time, Leland Brendsel, in which it was clear to Buffett that Brendsel was unwisely striving for double-digit returns.

That spelled trouble to Buffett and, within a year, Berkshire had dumped its entire stake in the company. In 2003, news came out that Freddie Mac had regularly misreported its earnings. Brendsel was forced out. In 2008, at the start of the financial crisis, Freddie Mac, along with its sister company Fannie Mae, was on the hook for piles and piles of unwise mortgage loans, and had to be bailed out by the government. Shares of Freddie Mac (FMCC) now trade at just over $2.

When Buffett bought Berkshire Hathaway (BRKA) in 1965 for for about $12 a share, it was a textile company and one of the largest employers in New Bedford, Mass. It quickly became Buffett's acquisition vehicle.

Buffett shuttered the textile business in 1985, and he moved the company's headquarters to his hometown, Omaha, long before then. The true success of Berkshire is the combination of the cash generated by its insurance business and Buffett's ability to invest that cash far better than anyone else on the planet. But Buffett has also proven good at picking managers and having a light touch. Only when companies prove to be a problem, like paint company Benjamin Moore, has Buffett swooped in. Buffett's conglomerate now ranks fourth on the Fortune 500 and now has a stock price of $210,000.

Pedestrians pass an ATM outside Wells Fargo & Co.'s San Francisco headquarters on Friday, December 24, 2004. Companies in the finance industry such as GE Capital and Wells Fargo & Co. accounted for about 52 percent of fixed-rate investment-grade bond sales in 2004, according to Merrill Lynch.

Buffett first announced his $290 million investment in Wells Fargo (WFC) in his 1990 annual letter to shareholders. Bank stocks were being battered by the savings and loan crisis, and Buffett characteristically took advantage of the market turmoil to buy into one of the highest quality banks he could find.

Buffett said that, as a rule, he generally doesn't like to invest in banks (a rule that he has broken again and again, first with Wells but more recently with Bank of America (BAC) and US Bancorp (USB)) but Wells was too much of a bargain to pass up.

That was a good call. Back in 1990, Wells Fargo had a market capitalization of $2.9 billion. It is now worth $275 billion. Last year, it earned more money than any other bank in the country. Berkshire is still Wells Fargo's largest outside shareholder, and Wells would like Buffett and Berkshire to stick around. Recently, Wells Fargo's CEO John Stumpf told an audience at the National Press Club that he advised the 84-year-old Buffett, who classically subsists on a diet of Cherry Cokes and steak, to cut back on his sodium intake. “When the food comes, Warren grabs a salt shaker in his left hand and one in his right, and it’s a snowstorm," Stumpf told the crowd. "And I know a snowstorm when I see one because I’m from Minnesota.”

Buffett has said the best investment he ever made was not a stock or a bond or even in real estate, but buying a copy of The Intelligent Investor, a book written by Benjamin Graham. Buffett read the book when it came out in 1949 and later enrolled at Columbia Business School in order to take classes with Graham. Buffett says the book still guides his investment decisions today, and he has recommended it to Bill Gates, among others. Here's what Buffett had to say about the book in his most recent letter to Berkshire shareholders:

I can’t remember what I paid for that first copy of The Intelligent Investor. Whatever the cost, it would underscore the truth of Ben’s adage: Price is what you pay; value is what you get. Of all the investments I ever made, buying Ben’s book was the best (except for my purchase of two marriage licenses).