How many Uber investors does it take to raise $2 million for charity? 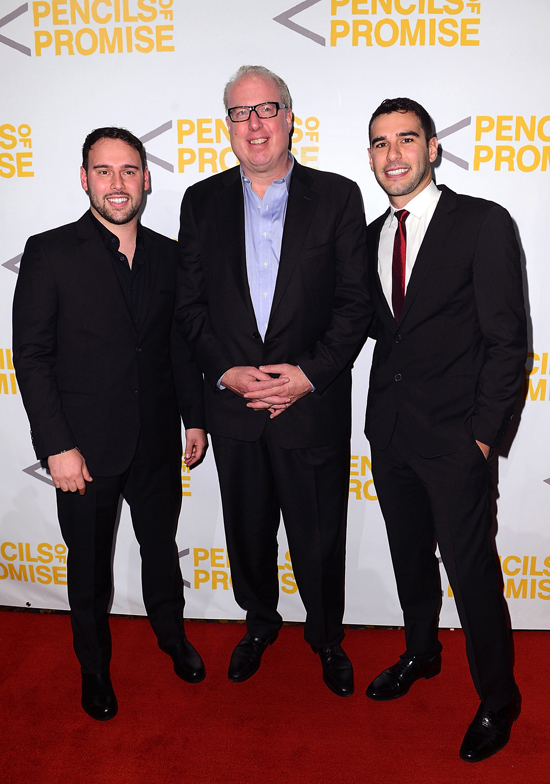 Most venture capitalists and tech entrepreneurs typically don’t spend tons of time in New York, but a bunch of them filled the giant ballroom at swank Wall Street fixture Cipriani for a charity gala last week. With at least four Uber investors amongst the attendees, the benefit raised more than $2 million for Pencils of Promise, a nonprofit that builds schools and trains teachers in Laos, Guatemala, Nicaragua, and Ghana.

It helped that Pencils of Promise founder Adam Braun is the brother of Scooter Braun, best known as pop star Justin Bieber’s talent manager. On top of guiding the career of the Biebs, Scooter is an angel investor and has lately backed startups including Uber, Spotify, and Pinterest through his firm SB Projects.

Scooter, who also runs a tech incubator in California, said that Pencils of Promise frequently draws supporters from both Hollywood and Silicon Valley. Though Bieber was not able to attend, another major music client of Scooter’s had wanted to perform at the gala. “I offered to set it up,” Scooter said. “I got a little clout, I could have brought somebody here.”

Instead, Scooter just donated to the cause, not to the evening’s entertainment. But he gestured to several attendees he knew “from the tech world,” including fellow Uber investors Shervin Pishevar, managing director of Sherpa Ventures, and Gary Vaynerchuk, CEO of marketing agency VaynerMedia.

It was an affair ripe with deal-making opportunities. The prospect had not escaped Vaynerchuk, a Pencils of Promise board member who was being honored at the gala, and who had invited two other venture capitalists, Ben Lerer of Lerer Hippeau Ventures and Box Group’s David Tisch (another Uber backer).

“I’m very cynical and hopeful that people aren’t supporting something just for the networking,” Vaynerchuk said. “But I’m not naïve. As someone who is always on and always biz-devving, I think it’s an appropriate time to take a breather from that.”

Still, Pencils of Promise has a unique appeal in Silicon Valley. Several venture capitalists have accompanied the organization on school-building trips abroad, including Joshua Kushner, founder of Thrive Capital as well as health insurance startup Oscar, who traveled to a school in Guatemala. (Kushner planned to head back to the Oscar offices after the gala to prepare for the next round of Obamacare enrollment, just a few weeks away.)

“There’s no shortage of awareness about this cause within our industry; there’s just a lot of knowledge,” Mood Rowghani, a partner at venture capital firm Kleiner Perkins Caulfield & Byers, said at the event.

The concept of Pencils of Promise—which emphasizes scalability and has already built more than 250 schools since its 2008 launch—resonated with Rowghani for the beneficial “compounding effect” that education can have on communities. “As VCs, we’re fundamentally investors, so when I put my philanthropist hat on, I’m looking for ideas in the same way—I look for a multiplicative effect in philanthropy,” he said. “Not just growth but the notion of feeding something that just spawns.”


Plus, technology is one of the top priorities for Pencils of Promise, Vaynerchuk explained—sounding more like a tech entrepreneur than a philanthropist. “There’s only two or three places that are the most effective tech players in the space,” he said, referring to the non-profit sector. He named Charity Water and Invisible People, other tech-savvy philanthropies. “And we can do it too. We’re going to impress people with our innovation over the next 24 to 36 months,” he added.

Indeed, the initiatives have recently caught the attention of Microsoft (MSFT), which approached the organization to suggest a partnership. In typical Silicon Valley fashion, the endeavor was announced at the gala with the fanfare of a tech product unveiling: Microsoft is providing tablet computers to Pencils of Promise schools. So far, classrooms in Ghana are already using several Microsoft tablets, “but hopefully that’s just the beginning of the use of technology,” said Adam Braun.

With such a high concentration of investors and entrepreneurs involved with the charity, could more deals be in the works? Another gala honoree, Brad Haugen, CMO of SB Projects and chairman of the Pencils of Promise board, thought so. “That’s the cool thing about a room like this, you have a couple of drinks and start talking,” he said.

“It’s Sun Valley,” remarked a bystander on the red carpet, referring to the famous annual conference of investors and entrepreneurs.