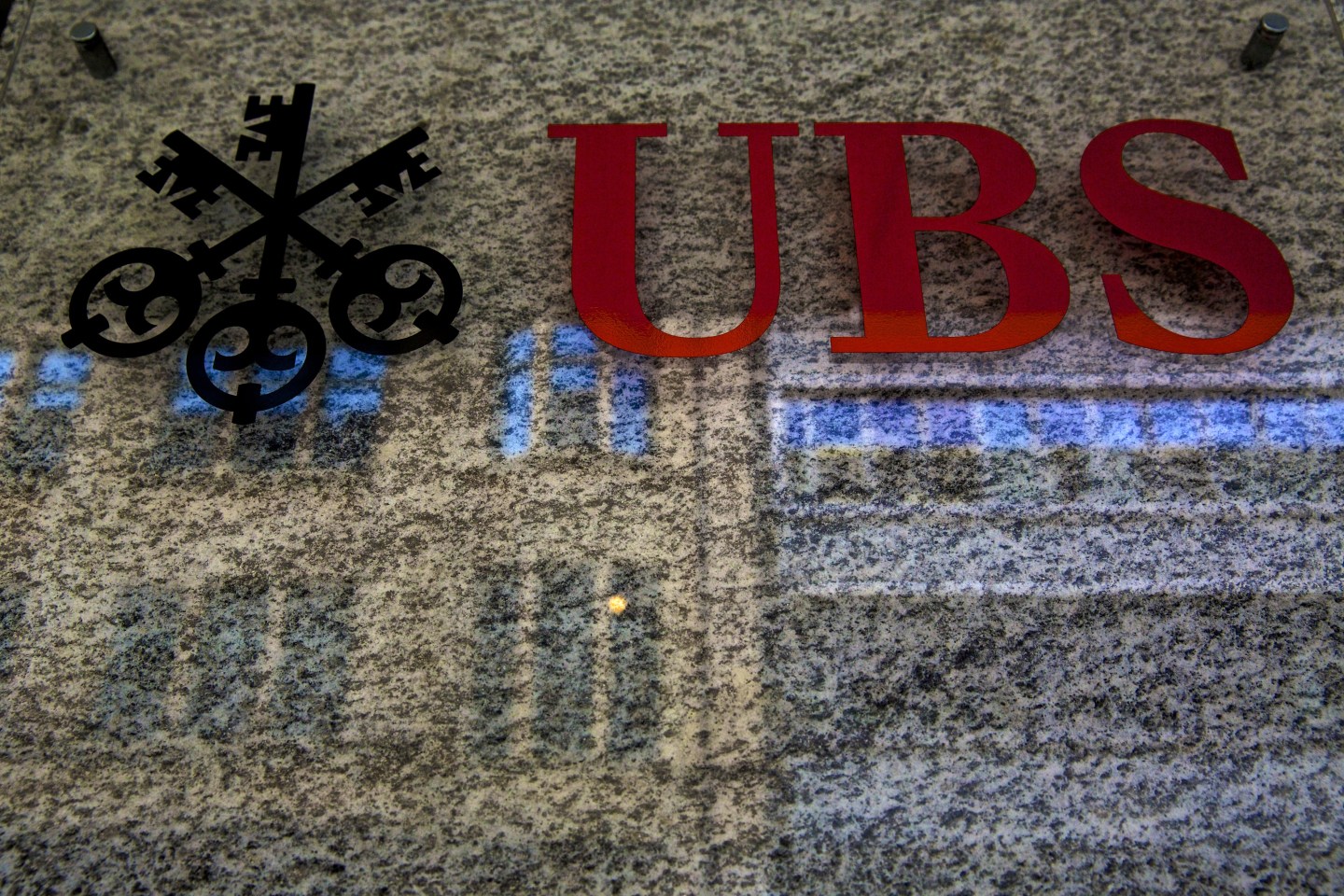 A UBS logo sits on display at the headquarters of UBS AG in Zurich, Switzerland, on Thursday, Oct. 23, 2014. UBS AG is seeking to bolster its position as the largest manager of private wealth in Asia by looking for millionaires in an unlikely place: the lower-income part of Hong Kong. Photographer: Gianluca Colla/Bloomberg via Getty Images
Photograph by Gianluca Colla — Bloomberg via Getty Images

The European Central Bank’s stress tests may be safely out of the way, but that’s not the same as an all-clear–as some of Europe’s largest banks outside the Eurozone made clear Tuesday.

Swiss giant UBS AG (UBS) took a charge of 1.86 billion Swiss francs ($1.96 billion) against earnings in the third quarter, against a background of talks with regulators over alleged manipulation of the foreign exchange market.

The bank had warned last month it could face “material” penalties from regulators around the globe over the probe.

The U.K.’s Financial Conduct Authority, which has assumed an informal leadership in the probe due to London’s role as the world’s biggest foreign exchange marketplace, said in September it is in talks with six of the world’s largest banks including UBS, JPMorgan Inc. (JPM) and Citigroup Inc. (C) in pursuit of a total settlement that may top $2.5 billion. The Department of Justice is also looking into the matter.

But UBS’s liability may go well beyond what the F.C.A. and Justice are seeking, as it’s also facing lawsuits from investors in the U.S. who are claiming damages.

Even so, the bank’s shares rose 4.2% in early trading Tuesday as a big revaluation of deferred tax boosted profits by a surprisingly large CHF1.3 billion.

Meanwhile, in the U.K., Lloyds Banking Group Plc (LYG), which owns three of the U.K.’s biggest Main Street bank names, Lloyds, Halifax and Bank of Scotland, said it would close 200 branches and cut 9,000 jobs, nearly 10% of its workforce, as it moves more of its business to digital platforms.

Lloyds also took another 900 million pound ($1.5 billion) charge in the never-ending saga of mis-selling payment protection insurance. The cost of that scandal for Lloyds alone has now reached 11.5 billion pounds. Its shares fell 2.3%

And to prove that bad things always come in threes, Standard Chartered Plc (SCBFF), a U.K.-based bank with a focus on emerging markets in Asia and Africa, said its third-quarter profits fell 16% from a year earlier and cut its profit forecast for the year, due to a $300 million settlement with the U.S. over sloppy internal controls, restructuring costs and weak underlying business in China and India. The shares tanked nearly 10% and have now lost nearly 50% in the last 18 months as its once-enticing exposure to emerging markets has fallen out of fashion with investors.

Being based outside the Eurozone, none of the reporting banks figures in the ECB’s stress test at the weekend, although Lloyds received a lukewarm approval from the European Banking Authority in a parallel exercise for banks across the E.U.. U.K. regulators are due to tweak that test to reflect their own (tougher) requirements and will publish their results in December.