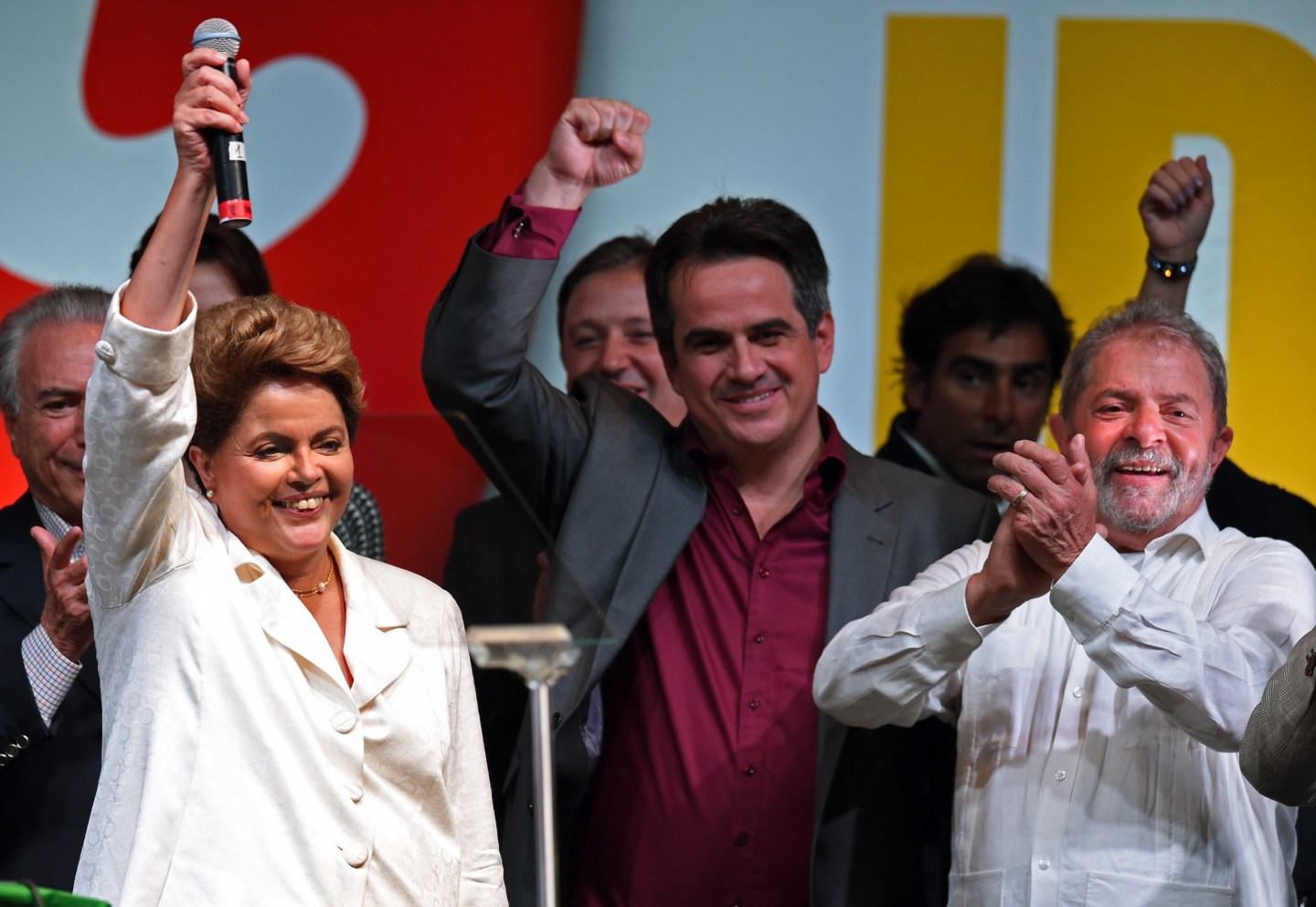 After winning with 51.6% of the vote—a slim margin over pro-business candidate Aécio Neves, who brought in 48.4% in second-round voting—Rousseff will face an uphill battle to meet campaign promises to expand social benefits for the poor while improving Brazil’s economic situation.

During her victory speech, the reelected president promised to “continue to fight inflation and make improvements in the field of fiscal responsibility.” Investors, however, are waiting to see if all of this talk will lead to any action, with heavy importance placed on who will replace outgoing Finance Minister Guido Mantega.

Mantega gave an optimistic speech the day following Rousseff’s reelection, despite the fall of Brazil’s currency, the real, to a six-year low and a tumble in the country’s financial markets.

In a press conference, he said he was “happy with the result of the election” because “this shows that the population approves of our economic policy.” Mantega also promised to “increase the transparency of our fiscal affairs,” echoing the president’s victory speech.

But as Mantega will be replaced when Rousseff begins her second term, his words have little weight for some. His successor will hold the key to Brazil’s immediate economic future, according to Tony Volpon, Brazil specialist and head of emerging-markets research for the Americas at Nomura.

“The list of things to be done [for Rousseff to regain trust] is long and demanding,” Volpon wrote in a report released on election day. “The most immediate task, in our opinion, is the nomination of a minister of finance with the autonomy and stature to deal with what will be the most pressing task: how to deal with a rapidly deteriorating fiscal picture, where the country faces primary deficits and a nominal deficit that may surpass 4 percent of GDP in an environment of still subdued growth. Rating agencies, as well as many investors, who have so far largely given Brazil a pass, even as the fiscal situation has steadily worsened, in respect to the country’s democratic process will now want to know what the government plans to do.”

Presidential aides, however, have said the announcement of new cabinet members is unlikely in the coming days, as Rousseff rests after a grueling campaign that left her almost voiceless during her victory speech.

But when she does speak again, she will have to find a way to bring the business-minded population that voted for the opposition to the side of her target voters—some 40 million who were pulled out of poverty by her party over the last decade—in order to create a more united Brazil that trusts where she is taking the country.

“President Rousseff will now have to look beyond the class struggle rhetoric of her campaign and show whether she can regain the trust of the south and southeast of the country that voted for the opposition by a 2:1 margin, and is responsible for around 70 percent or more of the country’s GDP,” wrote Volpon. “Without their support there is little chance that Brazil will see investment rates—which at a paltry 17% of GDP are the lowest of any of the major emerging market economies—rise.”