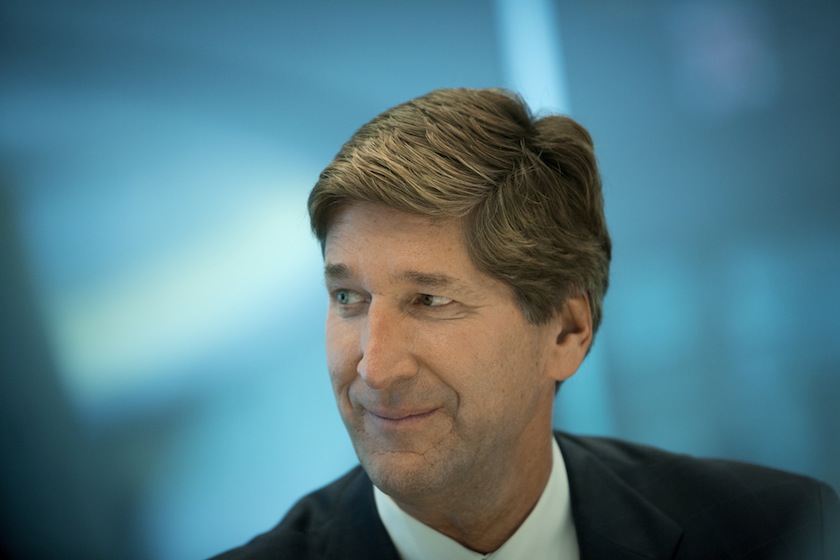 Citizens Financial Group reported a solid 31% increase in quarterly profit this morning compared with the same time last year, slightly beating expectations by around a penny a share.

Monday’s earnings report was a milestone of sorts for Citizens (CFG), as it was its first as an independent company following its spinoff last month from the Royal Bank of Scotland. The strong increase in earnings follows a year of intense reorganization and repositioning of the regional U.S. banking player. Under CEO and Chairman Bruce Van Saun, Citizens is making use of the bank’s strong deposit base to boost its presence in commercial banking as well as auto and student lending. Monday’s earnings reflect some of those changes, but the bank contends that it is just getting started.

Van Saun sat down with Fortune to discuss the bank’s future plans and what it could mean for its customers and its competitors. The following interview has been condensed and edited for publication.

Fortune: How does it feel to be separating from RBS?

Bruce Van Saun: Pretty good. I think being an independent public company is always a positive because you are held accountable to analysts and shareholders on a regular basis. That means your strategy needs to be sharp and well executed. For most of my career I have been associated with public companies and I think there is a good discipline that goes along with that.

Do you think the RBS brand name helped Citizens grow here in the U.S.? If so, now that it’s gone, are you concerned you’ll have a harder time getting new clients?

I think it helped a bit initially in building out the commercial side of our business. I think over time we have made big inroads whereby people now recognize Citizens as a player in the commercial space in its own right—witness our rankings. But even though RBS will no longer have an ownership position in Citizens, we are going to sustain a commercial business relationship, which should be mutually beneficial. We’ll refer business to RBS and have access to a global bank through that relationship and then they will refer business to us at the U.S. point of execution for some of their client needs as well.

What does this independence mean for your customers and for the bank’s future growth prospects?

We can now focus on running the bank on a standard in line with our U.S. peers. We are focused on running our bank better. If you look over the last few years since the crisis, RBS was very focused on “de-risking” and shrinking their balance sheet and not so much focused on growth. This meant there were some constraints on what Citizens could do. As such, some of our peers were able to come out of the crisis and go on the offense a little faster than us.

What are some of the ways Citizens’ growth might have been limited under the RBS umbrella?

Let’s look at the commercial real estate space. Before the crisis, RBS had around two times the index in commercial real estate exposure, whereas Citizens was probably around 0.9 times the index. After the crisis, RBS put their loan book into run-down mode, meaning no front book lending at all. As a result, Citizens missed a very good opportunity to put loans on after the crisis when the terms of trade went from being pro-borrower to pro-lender, with much better spreads and terms and conditions. So we missed the boat on that.

That being said, there are still some opportunities to get back towards an index-weighted position in commercial real estate, which we are now on the path to doing. For example, we just added a billion dollars to our commercial real estate limit. While it’s nothing outsized relative to our peers, it’s just getting back into the game we were once largely prohibited from playing.

What about on the retail or consumer side of the business? What were some of the constraints there?

One of the biggest constraints revolved around where Citizens was allowed to play geographically. We were really confined to doing underwriting in our existing footprint, mainly in the Northeast and Midwest, which limits the scale advantages you can have. You could invest in technology and platforms, particularly around consumer assets like auto and student loans on a bigger playing field. We have reversed those constraints and are now in more than 40 states for auto and operating a national student lending business, which helps our diversification and helps our growth prospects.

Is there really money to be made on the consumer side of the business these days, given all the new laws prohibiting activities that were once major profit centers for the banks?

Like I said, I don’t think we are generating the revenues we could from our excellent deposit market share. Those would be in mortgage, business banking, and cross-selling wealth management advice and services to the customer base. Part of our turnaround plan is to improve the returns in those areas and drive greater revenue from those deposits.

Do you have intentions of expanding into investment banking?

I have no desire to turn Citizens into an investment bank. None. The multiple you get for being much bigger in investment banking would detract from our overall valuation. But we still offer basic products that target those typically sold to CFOs and treasurers. We have a capital markets capability, which is really loan syndications; we have total markets capability, which is FX [foreign currency exchange] and interest rate trades; and we have a treasury-solutions capability, which offers cash management. For more traditional investment banking services, we have a relationship with Oppenheimer to offer M&A [mergers and acquisitions] and equity advisory. So they send debt opportunities our way and we open the door for them in these other ways. The investment banking space is already well served, so I think you need to stick to areas you can really differentiate yourselves and those are the areas we are already focused on.

So, what do you think Citizens does best and how do you hope to grow that?

I think our commercial lending business is very well positioned. It’s grown around 8% to 10% a year in terms of both loan balances and revenues over the last five years. We are focused on creating two equal sized parts of our bank—commercial and retail.

Part of the reason the commercial lending space has grown so rapidly over the last five years is due to the record amount of junk debt that has been gobbled up by investors. Are you concerned about the amount of junk bonds floating about and do you fear that a rise in rates could trigger another credit-induced financial meltdown?

I think we have very good credit standards. We are not just aggressively chasing growth for the sake of growth. Now, do we have too much debt? We are at a point where interest rates are low, so while some of the leverage numbers are approaching what you had pre-crisis, those deals were being done when interest rates were at 5% or something. Now, you are doing them at LIBOR plus spit (laugh). So, if rates are brought up gradually, as expected, then I don’t see any big risks on either the corporate side or on the consumer side.

You recently sold your retail operations in Chicago to U.S. Bank. Any plans of growing your retail footprint to other areas of the country?

Well, in the consumer space, we span 11 states, so we go through New England, into Pennsylvania, and into Ohio, and into Michigan. I think we already have a very attractive footprint when looking at it from the commercial side, as this area accounts for around 25% of U.S. GDP. It is also well above the median in terms of household wealth and income levels, so it is attractive from the consumer standpoint. So, my immediate focus is to tap into the potential of where we are now and deliver the higher revenues and better service. Down the road, are there fill in acquisitions or parts of the franchise we can strengthen? Yeah, maybe. But at this point, I don’t want to be distracted by any thoughts of acquisitions or expansions.

What are some of the biggest changes you have put forth since taking the reins of the bank last year?

One thing I’ve focused on is bringing a sense of accountability and a sense of urgency back to the bank. I am very hands-on in terms of driving results and driving accountability. I’d say if you ask my management team, they’d say that’s probably the biggest change they’ve seen. Specifically, I am pleased that we were able to coalesce around a turnaround plan that seeks to double our ROE [return on capital] from where it was last year at around 5% to 10% by the end of 2016.

We had to quickly develop a strong turnaround plan to show investors that we were making progress financially before the spin off from RBS. The sale of our Chicago assets was key to that, as it was able to create the funding necessary to do some of the investments we needed to get done this year. To have the management team and the board buy into that goal and then take it around the country and have 2,000 of the smartest analysts in the country say, “this is a good plan,” that was probably the biggest accomplishment for me.

Citizens’ customer service on the retail level has been known in the past to be somewhat, well, less than stellar, compared to its peers. Since taking over, how have you tried to rectify this perception and what are your plans going forward to address customer concerns?

Fixing that perception starts with making sure you have really good people running the organization. That starts with people who have seen what good service looks like at other large organizations. So the folks running the consumer business now are led by Brad Conner, who had a lengthy career at Chase where he worked with Jamie Dimon. Brad has brought over another fellow with him, Michael Cleary, who ran the branches at Chase. So I now think we have good leadership at the top and will upgrade the rest of the team over time.

Some of the other things we have done is investing in technology. We were really behind on the technology curve. RBS and Citizens together were pursuing acquisition-led growth and weren’t keeping up with the requisite investment in technology. So, over the last five years, we have stepped up and we are making an extra $100 million-ish per year in technology investments so we can replace all of the retail systems. There’s a new teller platform, the auto loan system is new, the student loan system is new, and the mortgage system is almost done. And of course we have put a lot of money into online banking and mobile banking.

Has any of this paid off?

Yeah, I think it has. We are seeing better service levels. We are redesigning our product offerings to be simpler and more transparent so people can better understand how and why they are getting charged fees. We have tried to be friendlier in terms of the basic checking account—we launched a one-deposit free checking, whereas before we had a convoluted thing where you had to make three deposits in a period that no one knew when the date started and when it ended. We also introduced the $5 Overdraft Pass so you’ll never be charged $35 for a cup of coffee if you go under your balance by a couple of cents. Changes like these have gone a long way in getting people to change their perception of Citizens in a positive way.